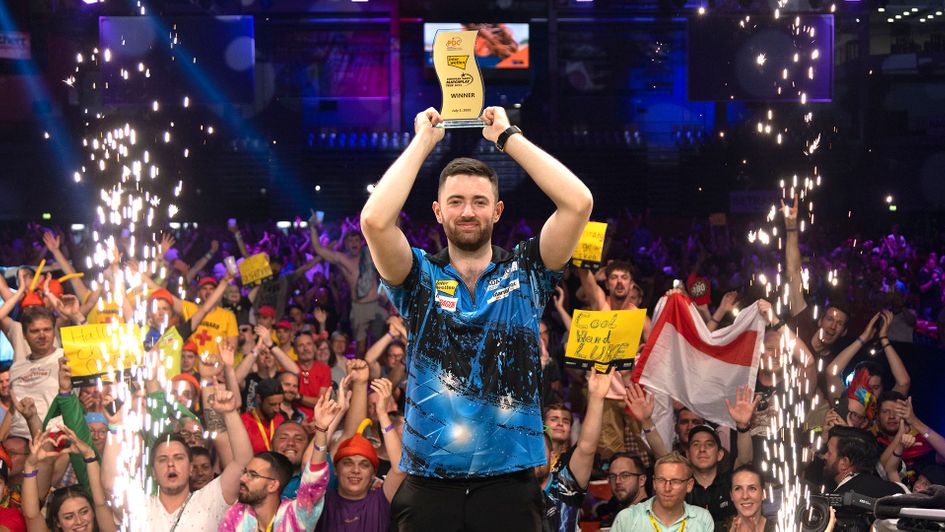 Luke Humphries won a fifth title of the season after edging a classic European Darts Matchplay final against Rowby-John Rodriguez.

Cool Hand came from 4-0 down against the Austrian, who was competing in his maiden ranking final, and survived a match dart in a gripping deciding leg before holding his nerve to claim his fourth European Tour title of an incredible 2022.

🏆🏆🏆🏆🏆 Luke Humphries wins a FIFTH title of the season and a fourth on the European Tour!

😅 But he had to survive a match dart in a deciding leg to do it...pic.twitter.com/WRp3o0c4d1

Humphries had breezed through to Sunday’s showpiece in emphatic style, following up a 6-2 win over host-nation qualifier Lukas Wenig by sweeping aside Ian White 6-1 with a 101 average.

The former UK Open runner-up then extended his winning sequence to 13 legs with a whitewash win over Stephen Bunting in the semi-finals, which set up a blockbuster showdown against the former World Youth finalist.

Rodriguez and Humphries exchanged maximums in the opening leg, but the Austrian was in dreamland after establishing a commanding 4-0 cushion.

The 28-year-old followed up an early hold with a magnificent 124 finish, before legs of 14 and 13 darts maintained his blistering start.

Humphries’ third 180 saw him open his account with a 14-darter in leg five, and this sparked an extraordinary spell, as he powered in a brilliant 156 checkout before restoring parity at four apiece with an 11-darter.

Rodriguez regained the initiative with a sublime 158 checkout to move 6-4 ahead, but Humphries again responded, following up a classy 112 kill with a 14-darter to level at 6-6.

Rodriguez then moved one leg away from glory in a nervy 13th leg, but a fabulous 148 outshot from Humphries forced a fitting last-leg shootout.

The Austrian had the advantage of throw, but a sixth 180 from Humphries shifted the pendulum, and despite spurning two match darts, Humphries returned to seal the deal on double four, after Rodriguez was unable to complete a 77 checkout on tops.

“In my mind it was probably one of the greatest finals we’ve seen in the PDC, that’s how it felt,” said Humphries, who has now won his last three European Tour events.

“I’m over the moon, but credit goes to Rowby-John. He was fantastic. He threw absolutely everything at me.

“When you make your first final, it’s not supposed to be as easy as that, and he made it look easy.

"That's probably my greatest win ever."

Despite succumbing in cruel fashion, Rodriguez has put himself firmly in contention for Betfred World Matchplay qualification after pocketing the £10,000 runner-up prize at Arena Trier.

The 2021 World Cup of Darts finalist dumped out UK Open champion Danny Noppert and top seed Gerwyn Price to reach Sunday’s final stages, and he ended the hopes of German number one Gabriel Clemens earlier in the day.

Rodriguez then reeled off six consecutive legs to dispatch Nathan Aspinall 6-2 in the last eight, before recovering from 5-2 down to edge out Madars Razma in a compelling last four clash.

Elsewhere, Bunting was appearing in his second European Tour semi-final of 2022, following up a dramatic deciding-leg win over Martin Lukeman by battling past World Cup Champion Damon Heta.

Razma fell agonisingly short in his semi-final clash against Rodriguez, but wins over Wesley Plaisier and fifth seed Rob Cross strengthened the Latvian’s bid for a World Matchplay debut later this month.

Cross averaged 101 in a 6-3 win over Luke Woodhouse earlier in the day, while Heta was denied a third European Tour semi-final of 2022, despite accounting for Dimitri Van den Bergh in the last 16.

Aspinall averaged over 103 in his superb 6-3 win over Scott Williams at the same stage, while three-time European Tour winner White enjoyed a welcome return to form to reach his first ranking quarter-final since March.

The PDC European Tour now enjoys a brief hiatus before the Hungarian Darts Trophy takes place in Budapest from September 2-4.