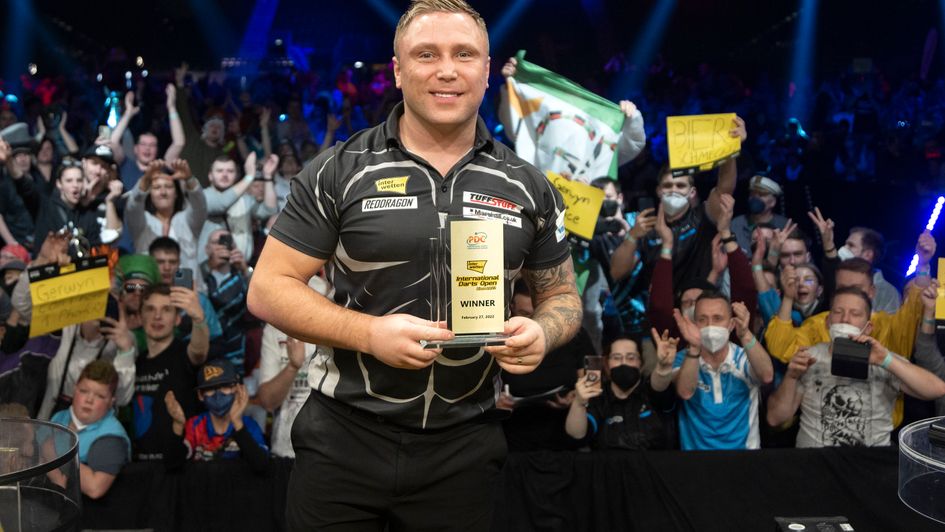 Gerwyn Price stopped Peter Wright from taking his world number one spot by defeating him in the International Darts Open final in Riesa.

Just over £10,000 of ranking money separated the star duo on the PDC's Order of Merit heading into the opening European Tour event of the season and after they both battled their way through the field at the Sachsenarena, top spot became the big focus point.

But Price dealt with the added pressure in his usual blockbusting fashion as he averaged 106.95, threw two 100+ checkouts and pinned eight out of his nine attempts at doubles in a stunning 8-4 victory.

Wright averaged 106.74 himself and hit five of the eight 180s in the match but the carrot of becoming world number one for the first time in his career may just have played its part in him missing 12 of his 16 doubles.

Incredible. With the added pressure of his world number one spot being on the line, Gerwyn Price averages 107 and hits 8 of his 9 attempts at double to beat Peter Wright 8-4 in the International Darts Open final.pic.twitter.com/IvF5IaJjMe

The Iceman, who demonstrated his recent return to form by sensationally hitting two-nine dart finishes in the Premier League a fortnight ago, arrived in Riesa knowing an early exit would almost gift wrap the top spot to Snakebite so it was no surprise to see him deliver focused performances throughout the tournament, which he has now won three times in the last four stagings.

Having brushed aside Ritchie Edhouse 6-3 on Saturday, he overcame Damon Heta 6-2 during Sunday afternoon's third round with an average of 102.16 before battling past Danny Noppert 6-4 in the quarter-finals.

The 2018 and 2019 champion didn't need to be at his peak best to defeat Nathan Aspinall 7-3 in the semi-finals with an average of 95.56 but he certainly got somewhere close to that with the title, £25,000 and his world number one spot up for grabs.

"I told Peter he will have to wait another week [to become world number one]," joked Price, who last suffered defeat in a European Tour event in 2020 having won both of last year's events that were staged.

"There was a lot of pressure on me in that final with the world number one spot resting on it, so I'm proud of myself tonight.

"I've played here four times and won three of them; I thank the crowd immensely for the reception they gave me and the way they supported both players in the final."

Wright remains on the verge of becoming world number one for the first time in his career, but will have to wait at least until next weekend's Cazoo UK Open.

An impressive weekend from the world champion saw him come through a last-leg shoot-out with Michael Smith in the quarter-finals, before enjoying a 7-3 success over Jonny Clayton in the semi-finals.

"I've got to fight to become world number one, I know it won't just be given to me," said Wright.

"Gerwyn showed tonight why he is world number one and a former World Champion; he never gives up, he always fights. But I'm after him, and hopefully I can do enough over the next few weeks."

Gerwyn Price says that he is proud of the way he performed under the pressure from Peter Wright as he maintains his world number one status! pic.twitter.com/0jAhPxbO3h

The seeded players entered the competition in the second round on Saturday. They played the winners of the first-round games.