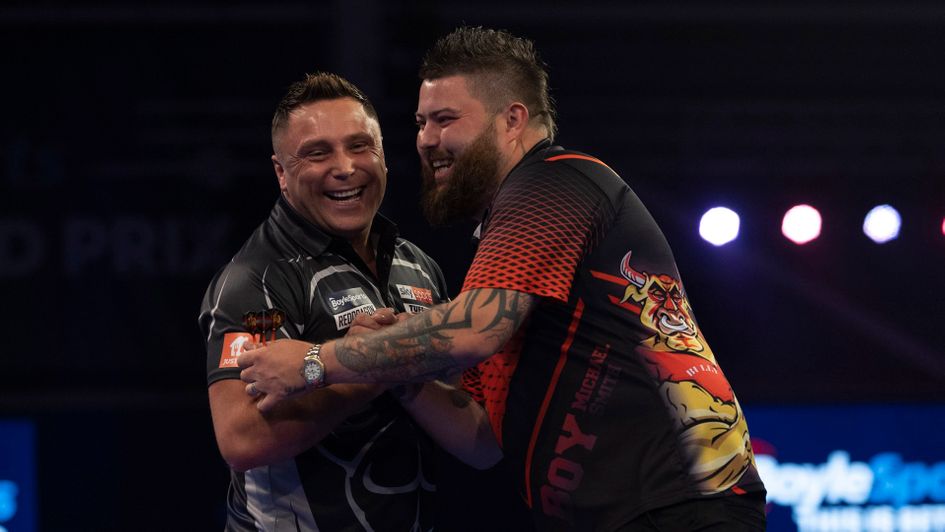 Gerwyn Price became just the sixth different player to ever achieve a 100+ average in the World Grand Prix as he opened his title defence with a 2-0 win over Michael Smith.

Price came from a leg down at Leicester's at the Morningside Arena to storm through the opening set 3-1 with an average of 104 but his levels dropped slightly in the second as a gutsy Smith fought back.

Bully Boy had the darts at 2-2 in the second and got off to a flier with an opening visit of 160 as the world champion failed to find a starting double.

Price was 253 points behind by the time he finally got away but visits of 180 and 140 put pressure on Smith, who then squandered three darts at a double to force a deciding set.

The Iceman cleaned up 81 in two darts and ended the match with a superb average of 100.82 - a feat only five different players had managed before since the tournament's inaugural edition in 1998. Phil Taylor managed nine of the total 16 ton+ averages in history while the highest ever is Alan Warriner-Little's breathtaking 106.45 back in 2001.

The Welshman, who won last weekend's Gibraltar Darts Trophy, landed 45% of his starting doubles and 50% of his finishing doubles in a clinical display.

The reigning champion is through to round two after a sensational 2-0 victory over Michael Smith, averaging over 100 in the process!

Price will now meet Mervyn King on Tuesday, after the 2012 runner-up won the tournament's opening tie with a straight sets defeat of debutant Martijn Kleermaker.

King survived two early breaks of throw from the Dutchman to edge the opening set 3-2, and took the second 3-1 as he moved into the second round for a ninth time.

Two-time World Grand Prix champion James Wade was made to work harder for his place in the last 16, coming through a three-set battle with Australia's Damon Heta.

Heta led 2-0 in their opening set, but failed to capitalise on that advantage as Wade hit back to level and took out 60 in the set's deciding leg.

Leicester-based Heta traded 14-darters with Wade as he claimed set two by a 3-1 scoreline, and countered a 121 checkout from the left-hander with a 13-darter to level the third set.

The next two legs were traded as the game move to a sudden-death leg in set three, and Wade took out another 121 finish to triumph in a hard-fought contest.

Now THAT is a perfect bullseye 😍

James Wade rounds off a magnificent match with a brilliant 121 finish to seal a deciding leg victory over Damon Heta!

2017 champion Daryl Gurney exited this year's World Grand Prix in the first round following a brilliant 99.05 average from Stephen Bunting in his straight sets victory.

Gurney won the opening leg, but Bunting took the next three to claim the set 3-1, including a 100 finish for a 14-darter.

2020 runner-up Dirk van Duijvenbode was another first round casualty as he lost out 2-0 to UK Open finalist Luke Humphries.

The former World Youth Champion capitalised on sloppy finishing from the Dutchman to lead 2-1 in the opening set and then finished 70 to claim the advantage.

Van Duijvenbode took out 96 as he shared the opening four legs of the second set, but he was unable to land the bull to stay in the game as Humphries wrapped up his last 16 spot.

Chisnall won the opening set 3-0 and also led in the second before a 14-darter moved Suljovic 2-1 up, and after the Englishman finished 109 it was the three-time semi-finalist who took the deciding leg to level the tie.

Suljovic then took out 97 to lead in the final set, but Chisnall levelled and then moved ahead with a 13-darter before taking out 63 for victory.

Smith took the first set without reply, and after sharing the second set's opening two legs he posted a 110 finish for a 12-darter and wrapped up the success with a 14-dart finish.

The night ended with a thrilling 2-1 victory for Ryan Searle over Dimitri Van den Bergh, as both players missed match darts in a gripping deciding leg before Heavy Metal eventually got the job done.

The first round concludes on Monday with the remaining eight ties from the first round, including five-time World Grand Prix winner Michael van Gerwen's all-Dutch tie with Danny Noppert.