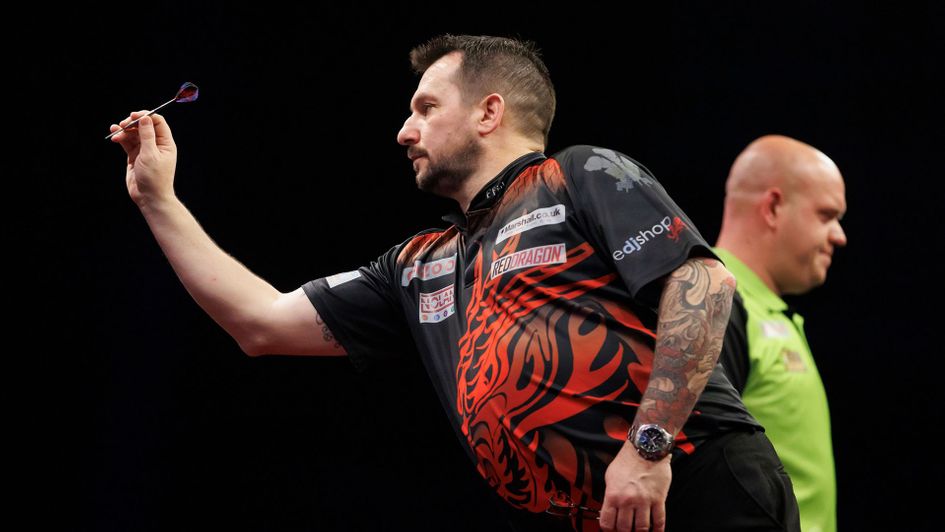 The new-look Premier League season reaches its climax in Berlin on Monday night so Paul Nicholson reflects on the key issues and offers his predictions for the play-offs.

A lot of people will voice their negative opinions of this new format based on just one campaign, but we need at least another year to really see if it works.

It hasn’t been a disaster and when you change a format, that’s what you don’t want. It’s been interesting to see how the players have evolved and coped with the increased number of matches.

The players have found it really hard to prioritise the Premier League over ranked action. The influx of European Tour and World Series events on top of all the Premier League games has taken its toll and it’s no coincidence that other players – most notably Luke Humphries – have been taking advantage in the ranked action, as well as Rob Cross albeit without a victory.

I can’t imagine how tired some of these players will be feeling and where they think they should be focusing their energy. But we will discuss this more in a future column.

In previous years, we remembered the nights based purely on the standard and drama of one or more of the five/four matches.

This year, any great quarter-final and semi-final matches faded into insignificance as the story was always about who won the night. It’s quite hard to recall any early round matches vividly but there were some crackers.

Obviously Gerwyn Price’s big night in Belfast included nine-darters against Michael Smith and James Wade either side of averaging 109 in a 6-5 thriller with MVG but arguably the match of the whole tournament so far was when Jonny Clayton beat MVG 6-5 in a first-round clash in Manchester when they averaged 109 and 105 respectively.

Sometimes the players were tired by the end of the night so the finals weren’t that great, and we saw so many repeat fixtures which can only take away the hype of certain match-ups that we’d usually be eagerly anticipating. Overall you could argue it was geared more for the fans in the arenas than those watching at home.

There has been criticism about the number of 80+ averages being recorded by all players during the season but I think too much is being made of it.

These format matches are so short, it is easy to slip down to those levels without playing too shabbily. For example a 16-darter is the same as an 18-darter in terms of winning the leg at the same visit but average wise the difference is 94 and 83! So if you win a couple of legs with 18-darters you haven’t got that much opportunity to claw yourself back into the 100s that we expect to see more often.

I communicate this too my students all the time – we’ve got to forget about the average. A 13 darter is the same as a 15 darter but there’s a difference of 15 in those averages!

There will also be a lot of edgy games during such a long season so it’s completely reasonable to expect them to be below par on several occasions.

Overall the seasonal averages ranging from 99.2 from Michael van Gerwen to 92.14 from Joe Cullen over the amount of games we’ve seen isn’t alarmingly worse than previous campaigns by any means.

The only reason those averages of the past were generally a bit higher was because they turned up specifically to peak for one match over a maximum of 14 legs – and more often than not they’d deliver. Now you’ve got to stay in a peaked mood for two to three hours and that’s difficult to do!

The two biggest stories are perhaps nearer the bottom of the table where Gerwyn Price fails once again to make the play-offs. It doesn’t seem to matter what the format is, the Premier League just doesn’t suit him.

He has lots of hot spells throughout the season and obviously has a high level but perhaps the span of a February-May campaign doesn’t play to his strengths, and he will need to address this in the future if he’s to ever win it.

Sure, the injury problems didn’t help but James Wade missed a week too and still managed to find the level of consistency required to grind out enough wins, even if not spectacularly.

Price won two league nights which isn’t bad compared to everyone else and is the same amount as two of the players in the play-offs – but there were just too many first-round defeats and that left him with far too much work to do.

We’ve never seen a player of Price’s talent never reach a play-offs and you have to start questioning why, in the same way why Michael Smith has never won a ranked major title.

Peter Wright actually managed more first-round wins (9) than both James Wade (8) and Joe Cullen (8) and in a ‘normal season’ he’d have therefore made the play-offs but he lost seven of his semi-finals and that proved fatal to his chances of winning the Premier League for the first time.

Joe Cullen won 14 matches overall – two more than Wright – but that included two walkover wins over Gerwyn Price and James Wade so there’s inevitably going to be some suggestions that he was somewhat fortunate. Take those four points away and he actually finishes lower than Michael Smith.

That said, he may have won those matches and that in turn would have helped him in the semi-final matches, which he ended up losing on those nights.

It wasn’t in Joe’s control and it’s not his fault that the walkovers are the weakest part of this format.

This will get talked about more later in the year if his fortunes don’t change, but Gary Anderson may well have thrown his last Premier League dart.

There’s no guarantee he’ll find enough ranking points between now and January to be considered as a realistic pick, even though he’ll always put bums on seats in Scotland. There has to be a legitimate reason and we don’t want another Raymond van Barneveld situation.

He was the most inconsistent player by far and of the 16 nights, he went home after one match on 13 occasions. I do have a sneaky suspicion he may announce his retirement plans after this year’s World Championship and have a farewell season in 2023, including the Premier League.

There was a spell when he won in Nottingham and then had an unreal Players Championship weekend in Barnsley but apart from that he’s struggling to dominate on a regular basis like he used to. No player is immortal, just remember that.

Smith out but finding form

The four players in the Premier League play-offs are all glad Michael Smith isn’t involved!

It wasn’t an easy start to the season for him but the fact he ended up finishing sixth after losing so many close matches to Michael van Gerwen and Jonny Clayton throughout the campaign is actually not too bad – and he finished it so strongly.

He said winning that last night in Newcastle would set him up for the season and he’s already backed that up by winning his first European Tour title for five years and then the US Darts Masters at Madison Square Garden!

Since May 1st and before the recent Nordic Darts Masters, he had played 34 matches and won 29 of them. That’s really, really good. He’d lost to MVG twice 6-5, Jonny Clayton, Danny Noppert and Rowby-John Rodriquez in a scrappy first-round match on the European Tour. That’s it. And he won four titles!

He’s forgotten about the Premier League season already but he’s maintaining the momentum in style.

Who will win the Premier League?

Some suggested having no fans played into Jonny Clayton’s hands last year for some reason – perhaps more because the likes of Michael van Gerwen and Gerwyn Price are perceived to play better with crowds.

But they’ve come back louder than ever this year and he’s still at the top!

He’s constructively rested from the recent European Tour action in the Netherlands due to the World Series events in New York and Copenhagen so I think he’ll be feeling refreshed for Monday night.

Jonny has shown a consistently higher level over the past couple of months than Joe Cullen, who did look tired at spells as he tried to get used to a far more hectic schedule than he’s previously been used to.

That said, he’ll have been able to spend the last couple of weeks resting and practising while the other three play-off contenders were jetting off to New York and then Copenhagen for the World Series so it’ll be interesting to see who looks most energetic in Berlin.

If he hasn’t relaxed properly and used his time wisely, then Clayton will have him for breakfast.

Joe is going for the ‘Jonny Clayton double’ of winning both the Masters and Premier League that will spark the ranking money debate again but I don’t believe he’ll get past the Ferret.

Jonny will enjoy it being a neutral crowd rather than it being at the O2 in London although he’s a very good ‘away’ player anyway having beaten both Gary Anderson and Peter Wright in Scotland this season!

He’s also built up a body of experience to get through occasions like this and nothing fazes him anymore.

This is very intriguing because you’ve got Michael van Gerwen, who is injured and awaiting surgery, and James Wade who slipped off a bit towards the end of the season due to fatigue, illness and inconsistency.

Wade has seemingly lost a bit of weight, looks healthier and played pretty well during the World Series events, including a victory over MVG in Copenhagen.

This all screams to me that Wade will pinch it.

One of the big stories this year has been Van Gerwen’s return to winning regular titles but he’s still not the dominant force he once was and his recent carpal tunnel injury issues makes him vulnerable here.

He won’t be playing in the World Cup or the Players Championship events after it this week so he’s pretty much emptying the tank for the Premier League before his surgery.

Who wins the title?

I am siding with Jonny to win the whole thing and I’m certainly not the only one. Ridiculously, he hasn’t won any titles in 2022 despite the standards he’s been consistently reaching so what a way to break his duck with a cheque for £275,000 to go with the £25,000 he’s already banked for topping the table. Not to mention the £40,000 for the four nightly wins he’s managed.

If Jonny does go on to win this title, going back to the start of 2021, then his overall prize money will probably dwarf everyone else apart from Peter Wright, who landed the World Matchplay and World Championship double in that time. You’d then have to classify him as the second best player in the world on that basis even if his official world ranking says otherwise. 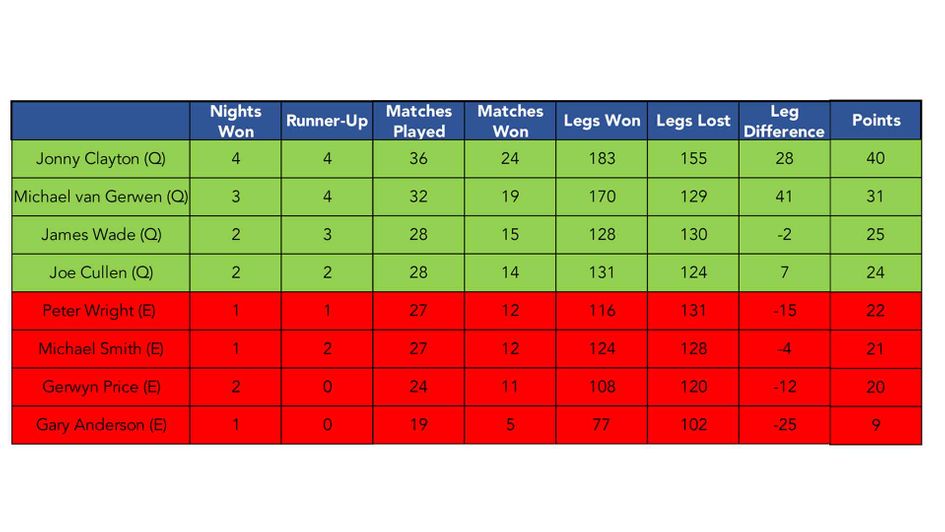 The Premier League standings after the regular season