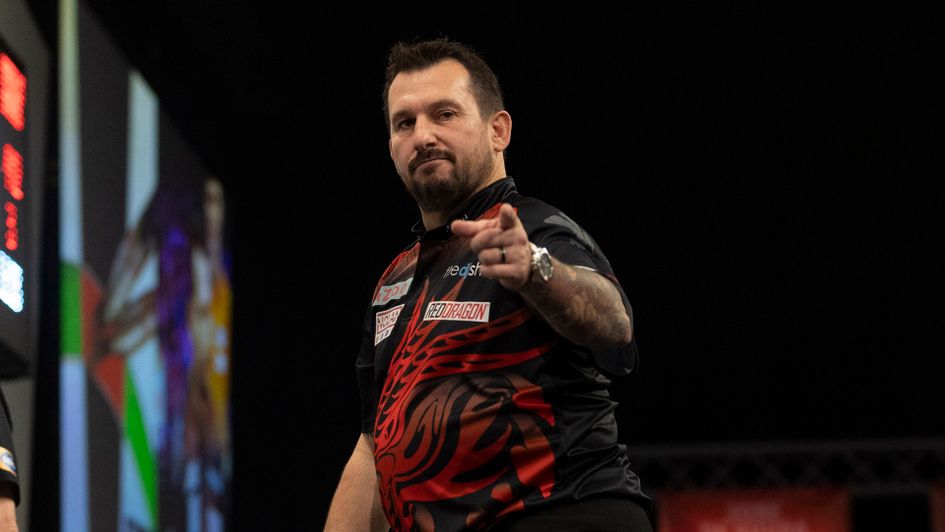 The ITV4-televised Ladbrokes Players Championship Finals is under way this weekend and our Chris Hammer brings you his tournament tips.

The penultimate major of the season is pretty much as wide open as it gets - the top 64 ranked purely on Players Championship prize money this year battling it out over three intense days with very little rest.

There were 18 different winners of those 30 Pro Tour events in 2021, with Jose de Sousa scooping the most of them with three, but obviously those are all played on the floor so you'd still expect the established big-stage performers to end up in the latter stages, especially if they've negotiated the dicey best-of-11 leg first-round on Friday night.

Last year's runner-up Mervyn King and Joe Cullen were two notable casualties while one of this season's two-time title winners Chris Dobey somehow lost to William O'Connor despite averaging 103 - compared to his opponent's 96 - and firing 10 maximums.

Gerwyn Price survived a scare as Jason Lowe spurned a dart at a double which would have put him 4-1 up while Jonny Clayton scrapped away long into the night in an awful clash with 5/1 outsider Alan Tabern, who wasn't even anywhere near his best and still caused an almighty shock.

But performance saw zero change in the Ferret's tournament odds for obvious reasons - he averaged 89 and missed 18 darts at his doubles. However, you've got to bare in mind he'd been waiting until around 10.30 at night to play, the conditions on stage were cold and drafty while he just got dragged into a dogfight. It can happen to the very best, especially in a precarious short format match.

Now he's got that awkward one out of the way he can relax and look forward to getting through a relatively quarter of the draw that still includes Dimitri Van den Bergh, Luke Humphries and his next opponent Scott Mitchell.

Based on the fact he's won more titles than anyone this season with six - including four televised crowns - and boasts statistics that also ranking him firmly within the top three in the world, you'd have back his chances to reach the last four, where the likes of Peter Wright, Michael van Gerwen or Gary Anderson could lie in way.

Clayton simply doesn't fear anyone right now - except perhaps Tabern if their paths ever cross on a late, freezing Friday night at a holiday camp again - and his odds of 6/1 do seem pretty long based on his form.

The section of the draw that includes Snakebite and MVG is a tough one to call, especially with the latter preparing for an eagerly-anticipated clash with his old Dutch rival Raymond van Barneveld, who rolled back the years on the Butlin's stage to average 104 in a 6-1 thumping of Maik Kuivenhoven on Friday night.

Barney's return to the PDC has heralded a Players Championship title this season while he also produced some creditable displays at the Grand Slam of Darts before missing out on the last 16 to Gary Anderson and Michael Smith.

Wright admitted fatigue was an issue for him on the final day of the Grand Slam when he ran out of steam against Gerwyn Price after his sensational comeback to beat Smith 16-12 just a few hours earlier and you have to wonder if five matches over the weekend - all but one of which will be no shorter than best-of-19 legs - will cause the same issue.

In the top section, Price could find himself vulnerable in a quarter that includes the dangerous duo of Jose de Sousa and Krzysztof Ratajski as well as his next opponent Martin Schindler, who beat him during the group stages of the Grand Slam of Darts over best of nine legs.

Sure, that may have effectively been a dead rubber for both players but the German has statistically been playing really well on the Pro Tour this season and maybe that performance will give him the belief that he can finally reach his potential on the TV stages. Can he do it over the best of 11 legs?

If he can produce that level of performance to do so again then he should feel plenty confident to see off Brendan Dolan or Ritchie Edhouse before a quarter-final meeting with either de Sousa or Ratajski, who both struggled to hit top form at the Grand Slam. Schindler is 18/1 to win the quarter and that could be worth a small play.

Michael Smith looks good value at 20/1 for the title although he's admittedly in a tough quarter that will resume against a struggling yet seasoned operator in Daryl Gurney and hopefully continue against either James Wade and Callan Rydz. He won't fear either given the form he displayed at the Grand Slam of Darts and should he come through that then a quarter-final awaits against Rob Cross, Nathan Aspinall, Ryan Searle or Ryan Joyce.

Not easy but if he is ever to win the maiden major title that his career already deserves, then it never will be.

Bully Boy was brilliant during his run to the semi-finals of the Grand Slam but it was his newly-improved mental strength and body language that impressed pundits and experts the most. After all, everyone obviously already knew what he could do ability-wise.

He kept his cool to defeat Michael van Gerwen for the first time in a televised ranking event and was well on course to brush Peter Wright aside only for Snakebite to produce an incredible run of eight straight legs in which he averaged 115 to win 16-12. That wasn't Bully Boy choking, he just was unlucky to run into an almost unplayable onslaught. Anyone's levels would have been tested on the receiving end of that.

Also if that had been best of 19 or 21, he'd obviously have won handsomely so let's take that positive away.

The fact he's worked hard on this area of his game - as well as his weight loss last year and his big step away from social media - shows you how he's trying to leave no stone unturned in his pursuit to become a major champion. He's definitely on the right track and if it's not this weekend, it may even be the worlds next month.

There are many contenders you could make a serious case for, but if you are expecting the 'obvious' Clayton v Price or MVG v Price final you can get 9/1 on them both.