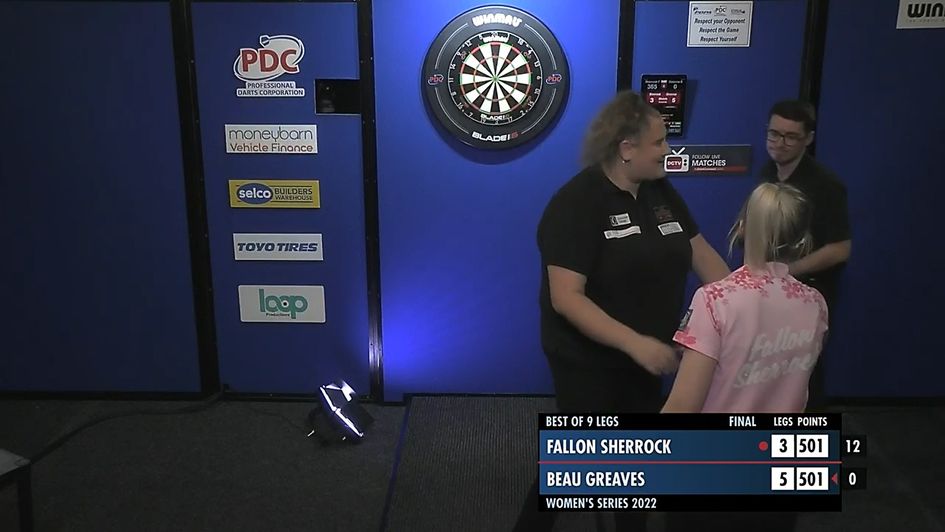 Teenage sensation Beau Greaves booked her place at the PDC World Championship ahead of Fallon Sherrock thanks to more record-breaking exploits in the PDC Women's Series this weekend.

The 18-year-old, who became the youngest ever darts world champion at the Lakeside earlier this year, missed the first 12 of 20 Women's Series tournaments this season due to her WDF commitments, but she then won the next six, including Saturday's double-header, to put herself right in contention heading into the final two events on Sunday.

With the top two players on the Women's Series Order of Merit earning an automatic place at the Alexandra Palace, Greaves trailed Sherrock by just £250 in the race to finish second behind Lisa Ashton, who could not be caught.

The Doncaster star subsequently stunned Sherrock 5-3 in the event 19 final, recording a women's record average of 107.86 in the process, and that meant she just needed to equal or better her rival's run in the last event of the season.

Incredible. Beau Greaves has qualified for the PDC World Championship ahead of Fallon Sherrock!

She missed the first 12 Women's Series events but this victory over Sherrock (with a women's record average of 107.86) clinched a seventh title in a row.pic.twitter.com/EYXaKFUkmt

Earlier, Greaves produced averages in the 90s in victories over Debra Watling, Evonne Taylor, Sarah Roberts and Corinne Hammond before seeing off Kirsty Hutchinson 4-2 in the quarter-finals.

She then overcame Natalie Gilbert with a 5-3 success in the semi-finals, averaging 94, before producing her best performance of the day in the decider with Sherrock.

They shared the opening six legs of a high-quality final, but Sherrock missed her chance to break when needing 81 in leg seven. Greaves took out 148 to hold throw and then followed three 140s with an 81 finish for an 11-darter to wrap up another title - extending her winning run to seven straight Women's Series events.

It wasn't too much longer before Greaves could start celebrating her Ally Pally debut as the Queen of the Palace suffered a last-16 defeat to Mikuru Suzuki in Event 20 that ended her chances of returning to second place.

Greaves then went on to defeat Ashton 4-1 in the quarter-finals with a 102.9 average before eventually beating Suzuki 5-1 in the final to make it a staggering 52 match wins in a row and an eighth successive title.

“It’s a brilliant day for me,” said Greaves, who will become the youngest woman to feature at the World Darts Championship in December.

“I did not think I would get to Ally Pally at all. I felt like such an underdog and I’m still in shock. It hasn’t sunk in yet.

“You have got to beat the best to be the best. I’m so happy. It’s such a massive achievement.”

Greaves will head to Ally Pally on the back of 52 Women's Series match wins in a row. 😳👏 pic.twitter.com/rtk3rdxjSQ