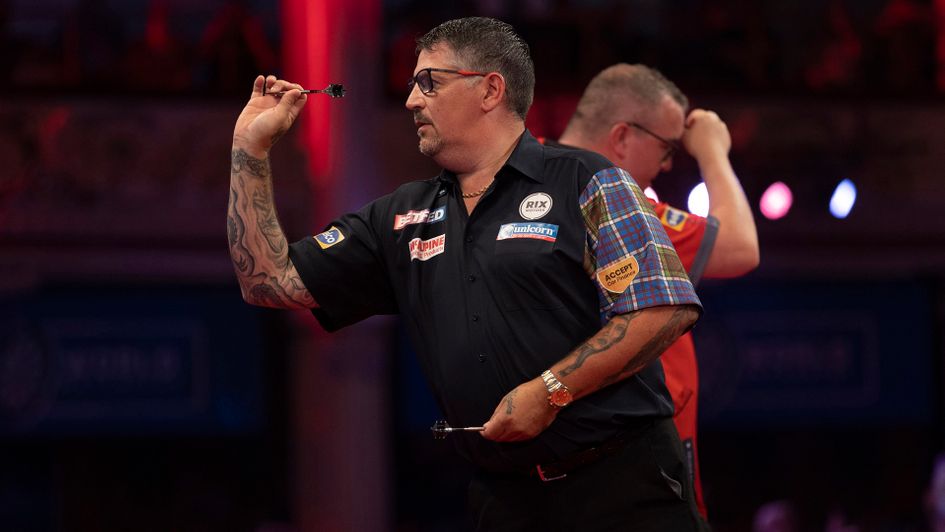 The second round of the Betfred World Matchplay concludes on Wednesday night so check out our match-by-match predictions, best bets and a suggested acca.

It's a star-studded night in Blackpool as Michael van Gerwen, Gary Anderson and Jose de Sousa take to the stage in a bid to reach the quarter-finals.

There's no guarantees in sport, of course, but most darts fans will be pretty sure this mouthwatering clash will rock the Winter Gardens with 180s tonight.

That said, these two maximum machines only managed three between them during the first round, with Smith somehow failing to hit any in his 17 legs with Ryan Searle.

We have to put that down as one of those strange old blips considering he's been one of the more prolific 180 hitters this season with 0.30 per leg, but that's still some way short of de Sousa's 0.38, which has been bolstered by his record-breaking efforts during the Premier League.

It's even-money that there's over 12.5 maximums and 6/4 about there being over 13.5 which is pretty appealing when you consider Dimitri Van den Bergh and Dave Chisnall combined for 19 last night - although the Belgian's personal tally of 14 was a tournament record for the second round.

Much of this bet depends on how close Smith can keep it - preferably like their UK Open battle which Bully Boy lost 10-9 - because there's no doubt de Sousa is the superior player right now.

The Special One averaged 97.45 in thrashing Gabriel Clemens whereas Smith managed a below-par 92.46 that was enhanced by impressive finishing of 52.63%, so both players have plenty in the tank for tonight's showdown.

Whenever Gary Anderson and Nathan Aspinall face each other, it's usually pretty close.

Of their last five meetings since the start of 2020, four have gone to deciding legs and two of those have ended up being Premier League draws, including a 7-7 back in May.

Both weighed in with fairly mediocre displays on Sunday night and were let off the hook by disappointing performances from their opponents - Stephen Bunting and Mervyn King - so they'll both be feeling the need to up their respective games tonight.

Anderson was quick to joke that players might struggle without the peace and quiet they've been used to over the past 18 months but to Aspinall's credit he seemed to cope better than most and seemed really fired up to bring the Winter Gardens crowd to their feet with five 180s.

Both are obviously big-time players but I'm going to give the edge to Aspinall, who enjoyed a better Premier League campaign, in a very close game which should therefore see plenty of 180s and some high checkouts.

Sky Bet's Match Action markets has some pretty tame levels for players of this calibre so I'm heading for the 5/4 available on the match having over 17.5 legs, a high checkout of over 118.5 and more than 9.5 total 180s.

Michael van Gerwen is a very warm favourite to reach the quarter-finals of the World Matchplay for the first time since 2017 having suffered three successive early exits but don't underestimate Ian White.

Diamond was a resounding winner of their last televised meeting back in October at the European Championship - which was graced by a small crowd - while their previous four meetings in 2019 were all extremely close, with White even beating him 8-7 in the Dutch Darts Masters final.

Of course, White was operating at a much higher level back then and has subsequently endured a lean patch in form that has seen him fall out of the world's top 16, but if he can get off to a decent start like more and more underdogs are managing to do against MVG these days, then he's got a fighting chance.

It really is all about which Van Gerwen turns up because the one from two nights ago is very beatable, but that other version we know so well could make a mockery of any previews that say White has a chance!

With that in mind I'm heading to a bet which doesn't factor in the result and thats for Michael van Gerwen to have two or more 100+ checkouts in the match at 5/4.

It's been one of MVG's most impressive areas of his game this season, winning 15.57% of his legs with 100+ checkouts. That's second only to Glen Durrant's 18.57% which is obviously inflated by how few legs he's won while it's 2% higher than anyone still left in this competition.

This really could be the match of the night and you sense there could even be a bit of needle up on stage after the way Joe Cullen dismissed Peter Wright's bullish claims about his World Matchplay chances following a thrilling victory over Chris Dobey.

The Rockstar was really pumped up against his good mate and the crowd seemingly brought the best out of him after a disappointing Super Series two weeks ago where he lost all three matches and didn't enter the last event due to personal reasons.

For that reason it was hard to ascertain whether he was in a good place heading to Blackpool but an average of 98, five 180s and a checkout percentage of 53% over 18 legs dispelled any fears over his focus and he'll be more than a match for Snakebite.

Well, certainly a lot more than Danny Noppert was on Sunday night. The Dutchman missed 11 of his 13 darts at doubles to make life very easy for Wright, who averaged a shade under 100 thanks to doubling of 53%, three 180s and a pair of 100+ checkouts.

If Cullen, who has won two ProTour titles in a very good season so far, brings his A-game tonight then Wright will have to be forced into one of his more spectacular displays if he's to reach the quarter-finals.

Both players are well above average for 180 hitting this season at around 0.3 maximums per leg while their 100+ checkout stats also put them in the top bracket of performers so if we can get a close match then expect to see some high quality darts.

I do fancy Cullen to nick this one and while the odds of him just to win are generous enough, if you want to risk throwing in most 180s as well then that's 3/1 with Sky Bet. The latter also offer 2/1 on him winning with 5+ 180s.