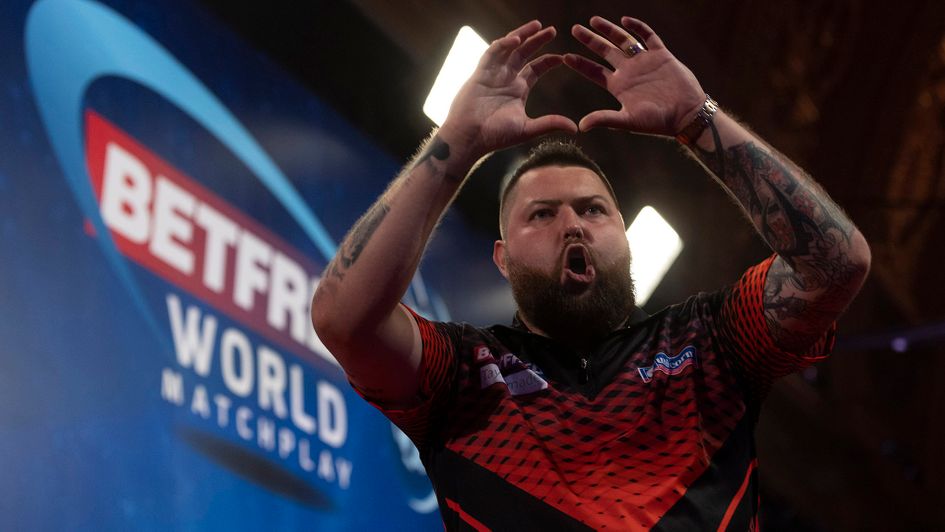 Michael Smith and Nathan Aspinall came through second round epics against Jose de Sousa and Gary Anderson to reach the quarter-finals of the Betfred World Matchplay in Blackpool on Wednesday.

Former World Matchplay runner-up Smith came from behind to defeat De Sousa 13-11, while Aspinall fought his way to an 11-9 victory over 2018 champion Anderson.

Smith and Aspinall will be in quarter-final action on Friday, taking on Peter Wright and Michael van Gerwen respectively after that pair also made it through to the last eight on a lively night at the Winter Gardens.

Two-time champion Van Gerwen scored an 11-8 success over Ian White, while 2017 runner-up Wright produced an exceptional display in defeating Joe Cullen 11-5 with the highest average of this year's event so far.

The opening game of the evening saw Smith keep his hopes of a lifting a first TV ranking title alive as he came out on the right side of the first tie-break in this year's event.

The start of the contest saw De Sousa continue his flying start to life on the Winter Gardens stage, as the Grand Slam of Darts champion averaged over 130 in winning the opening two legs.

Smith responded by winning five successive legs before De Sousa hit back to level at five-all, and three legs later the popular Portuguese pinned two double tops for an 80 checkout to lead 7-6.

De Sousa went on to lead 10-8, but was unable to manufacture a match-winning opportunity as Smith took out 71 to level and take the contest to a tie-break.

After going 11-10 up, De Sousa was first to attempt a match dart but after he came inside on his double 12 attempt, and Smith showed nerves of steel to land a skin-saving 108 finish.

A scrappy next leg went the way of Smith, and after De Sousa squandered four darts to level, the 2019 runner-up finished the job on double ten.

"I've been written off but I'm still here and in the quarter-finals now," said Smith, who landed seven of the game's 16 180s.

"Maybe two or three years ago I wouldn't have won that game, but I'm starting to win games that I grind out, and I'm hitting key shots at the right times.

"I wasn't at my best but I showed true grit, determination and will to win so I'm over the moon to get the win.

"Now that I'm in the quarter-finals, the aim is to win the tournament and I'd love so much to win this trophy.

"I want to make the final this year and put right the TV finals I've lost before - I'm sick of everyone telling me I'm going to win one!"

Another Winter Gardens classic followed, as Aspinall saw off Anderson to reach the quarter-finals for the first time in the event.

Aspinall, who had failed to win a match in his previous two World Matchplay appearances, landed eight 180s in a dogged display to prolong his stay in Blackpool.

A nip-and-tuck affair saw Anderson battle back from 8-5 down, hitting a roof-raising 149 checkout to move within a leg at 9-8.

However, Aspinall hit back with a 117 finish and two legs later sealed the deal with a 96 checkout in two darts to avoid a tie-break.

"It was a really tough game tonight and it's a big win for me," said an emotional Aspinall.

"At the start we weren't at our best and maybe we were giving each other too much respect, but in the last eight or nine legs it was a fantastic match.

"Gary started playing his best darts and we were both hitting big checkouts under pressure.

"He's my idol and he can see me being one for the future, but for me every time I beat him it feels brilliant. Mentally it was probably the toughest game I'll play this week but I did a professional job and I'm pleased with how I handled it.

"I'm not here to make the numbers up, I'm here to win and if I can play like I did in the last nine or ten legs then I'll be hard to beat."

Van Gerwen made it through to the last eight for the first time since 2017, seeing off White thanks to a professional performance.

The Dutchman averaged 100.68, though the opening ten legs of the contest were shared as a determined White stuck to his task.

Van Gerwen opened up daylight for the first time with a 13-dart break of throw to move 8-6 up, and the world number three never allowed White a route back into the contest as he moved a step closer to a third World Matchplay title.

"It was an okay performance," Van Gerwen admitted. "I could have done a little bit better but overall it was a good display and I'm happy.

"I did the right things at the right moment and I never had the feeling I was going to lose the game. There's more in the tank for later in the tournament and from here on I think I can do some more damage and go all the way.

"I made it difficult for myself at times but I felt a lot better than in my first game - but I know there's still a lot of work to do.

"I like Nathan a lot but he knows I'm coming for him and I'm going to do everything in my power to make it as hard as possible for him.

"It's always going to be tough against Nathan but I think he fears me more than I fear him. The format is getting longer and I prefer that but I still have to perform."

However, Van Gerwen's average was bettered by Wright in the final game of the night as the world number two achieved 105.46, the best of the tournament so far this week, in his comprehensive win over Joe Cullen.

Wright landed a 106 checkout on his way to a 3-0 lead, but was pegged back by Cullen as the 2018 quarter-finalist reduced the arrears to 3-2 at the first interval.

Having emerged back on stage with a change of flights and stems, Wright soon opened up an 8-3 lead, landing checkouts of 103 and 85 on the way.

Despite the scoreline, the Scot was unrelenting in his performance and raced to the finish line to maintain his quest for the Phil Taylor Trophy.

"I'm happy just to win, but it wasn't that easy," insisted Wright. "Joe's an awesome player and he's proved that over the past year, and he pushed me.

"It's hard in the heat and I think it affected Joe's darts more than mine. I had to put my foot down and focus with those darts - I like the gold darts, they make me feel good.

"They're all fantastic players who are left in the tournament, but I'm still in it. It's a darts tournament, not a talking tournament, and we do our talking on stage.

"Against Michael Smith I think there will be loads of 180s and it should be a cracking game. Michael is a power scorer. He lost in the final two years ago so he'll be trying to put that right."

Thursday will see the first two-quarter final matches take place, as the impressive Krzysztof Ratajski takes on debutant Callan Rydz in the opening game of the night.

World number one Gerwyn Price will then meet reigning champion Dimitri Van den Bergh in what promises to be a blockbuster clash.