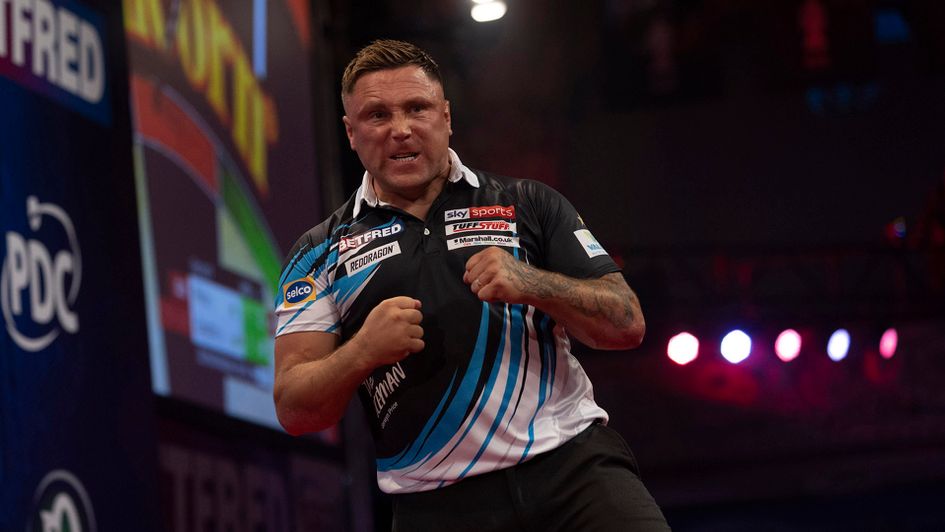 Dimitri Van den Bergh and Gerwyn Price will meet in a mouth-watering Betfred World Matchplay quarter-final after coming through thrilling second round ties in Blackpool on Tuesday.

Reigning champion Van den Bergh produced the performance of the tournament so far in defeating Dave Chisnall 11-8, while world number one Price laid down a marker with an 11-3 demolition of fellow-Welshman Jonny Clayton.

Callan Rydz and Krzysztof Ratajski also made it through to the last eight with victories over Rob Cross and Luke Humphries respectively on an electric night at the Winter Gardens.

A thrilling contest between Van den Bergh and Chisnall saw the Belgian smash the record for 180s in a second round tie at the World Matchplay.

That's 14 x 180s now for Dimitri Van den Bergh in this game, which is a new record for this stage of the tournament.

He eclipses the 13 180s hit by his opponent, Dave Chisnall, back in 2015 against Jamie Caven pic.twitter.com/8JD5mQ2WvF

The Belgian hit 14 maximums, shattering the previous record of 11 set by Chisnall in his 2017 loss to Alan Norris.

A puzzling start to the contest saw nine consecutive breaks of throw, before Van den Bergh held throw for the first time to move 6-4 in front.

A 127 checkout on the bullseye saw five-time World Matchplay quarter-finalist Chisnall level at 6-6, and he then held to move 7-6 up.

The next four legs went the way of Van den Bergh, as the world number nine took out crucial finishes of 72 and 85 under pressure.

Chisnall stuck to his task, and after Van den Bergh missed two darts for the match, he tidied up 60 in two darts to keep the contest alive and reduce the deficit to 10-8.

However, the reprieve was short-lived as Van den Bergh wrapped up an epic victory with an 11-dart leg before celebrating with a jubilant crowd.

"I didn't expect to break a record but I was expecting a lot of 180s from Chizzy and I had to step it up.

"I missed a lot of doubles but I had to keep digging in, and at the end of the day I pulled through and managed to win against one of the biggest scorers in darts.

"Even though I'm the defending champion, I think I'm handling this really well. I know that my doubles need to be better in the next game, so I've got to be focused.

"I'm playing the world number one and World Champion, and I'm the current reigning World Matchplay champion so it's going to be a fantastic game and I'm going to throw everything I can against Gezzy.

"I hope I can step up another level, especially with my finishing. I'm feeling good and the game against Dave has given me a lot of confidence. I'm going to give 100 percent and I'll never back down until the last double is hit."

Price made it through to the quarter-finals for the first time since 2015 as he ran out a convincing 11-5 winner in the battle between Wales' World Cup winners.

Price, who had suffered four consecutive first round exits at the World Matchplay prior to 2021, laid down a marker to the rest of the field by blowing away Premier League champion Clayton.

A hotly-anticipated contest got off to a flying start, as Price setting the tone with a 180 before neither player missed a double attempt in the opening five legs.

Clayton levelled at 3-3, before succumbing to a relentless onslaught from a fired-up World Champion, who landed checkouts of 108 and 102 on his way to reeling off eight legs without reply.

"I put Jonny under a lot of pressure from the start," Price explained. "He got back to 3-3 but I put him under the cosh from that point onwards and I was clinical on my doubles.

"I need to up my scoring game, and if I hit my doubles then nobody beats me. If I can do that and be clinical then I'll win this tournament.

"It was a big margin but I put Jonny under a lot of pressure. He missed a couple of opportunities but I was there to punish him.

"I'm happy to win. Jonny is a great player and friend and it's nice to get one over on a Welsh companion. There's no friends when you're on stage and you're up there to do a job."

The opening game of the night saw 2019 champion Cross crash out to Rydz, as the debutant came from behind to claim an 11-7 win.

Rydz, a 23-year-old Winter Gardens debutant, started the match slowly and was second-best to an impressive Cross who took a 5-2 lead.

However, Rydz grew into the contest and won five legs in succession, pinning the bullseye on three occasions to land finishes of 86, 89 and 92.

This man is LOVING the bull tonight as he reels in the biggest finish of them all, a 170 checkout, to move within a leg of the match! pic.twitter.com/8o2WiIJCAY

Despite Cross' efforts seeing him hit a bullseye of his own for a showpiece 132 checkout, Rydz never relinquished his lead and hit the tournament's first 170 checkout in the penultimate leg as he became the first player to reach the quarter-finals.

"I'm in dreamland," said Rydz, who missed just three attempts at double in the contest. "It's better than anything I've experienced in darts before, my emotions are high.

"I've said a few times that when my finishing goes in then my confidence builds. They were going in first or second dart every time and I didn't really miss the bull, but to get into a quarter-final of a TV event is a good time to do it."

Polish number one Ratajski reached the quarter-finals for a second successive year thanks to an impressive 11-5 win over Luke Humphries.

Ratajski ruthlessly punished missed doubles from Humphries, hitting two double tops for an eye-catching 140 checkout to open up a 4-0 lead.

A high-quality affair, which saw both players average just shy of 100, saw Humphries rally and the UK Open runner-up reduced the deficit to 4-5.

However, Ratajski pulled away once again, winning six of the next seven legs to set up a Thursday night meeting with Rydz.

"It was emotional for me at the end," said Ratajski. "I know Luke can play at a really high level and I'm really happy with how I played.

That is ASTONISHING from Ratajski there who takes out a whopping 140 finish with two double tops for a 4-0 lead! pic.twitter.com/LjRSUsAi0P

"The 140 was special but I had to play very well and my average was really good.

"I think today I'm a better player than last year. I'm much more consistent and I hope I can make it to the semi-finals but I must play my best darts because Callan is a young and dangerous player."

The second round concludes on Wednesday with former champions Michael van Gerwen and Gary Anderson in action against Ian White and Nathan Aspinall respectively.

Grand Slam of Darts winner Jose de Sousa takes on 2019 World Matchplay runner-up in the opening game of the night, which will conclude with a meeting between world number two Peter Wright and 2018 quarter-finalist Joe Cullen.