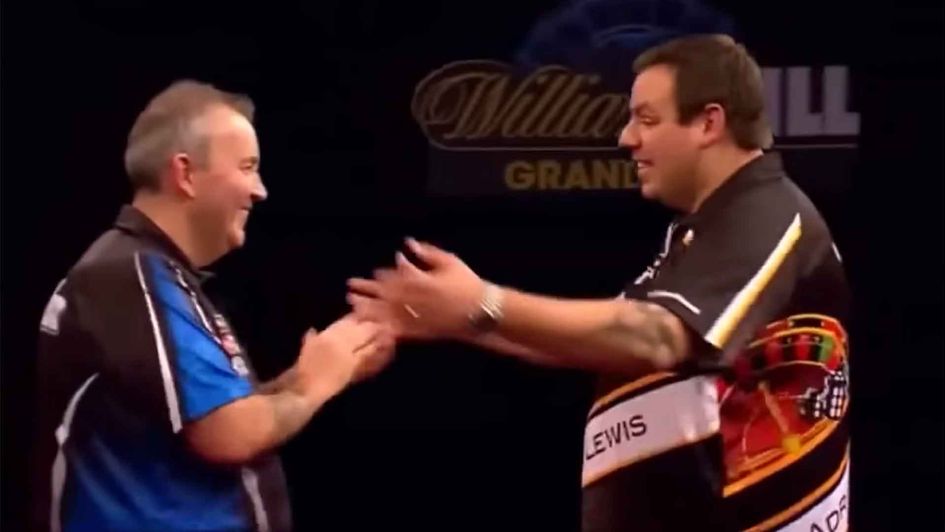 Phil Taylor and Adrian Lewis in the 2013 final

Grand Slam of Darts: Ranking the best performances in the tournament history including Phil Taylor and Scott Waites

There have been many memorable performances in 15 stagings of the Grand Slam of Darts but which truly stand above the rest?

Paul Nicholson highlights his favourite four displays from down the years in his latest Grand Slam of Darts column...

When the Grand Slam is mentioned, this is probably one of the first matches that springs to mind.

Everyone thought James Wade was at a point in his career where he was about to tick this title off his list, especially when he raced into an 8-0 lead in the final.

Scott Waites was obviously a very handy player but it would be three more years before he'd win his first BDO title and was understandably a big underdog before a dart was thrown, let alone when facing such a tall mountain to climb.

This was actually the second year running he'd made the final - a remarkable feat considering he was the only BDO player ever to get that far - but he'd lost 16-2 against Phil Taylor 12 months earlier and the prospect of another heavy defeat would have loomed large on his mind.

Wade may have had the experience and pedigree of winning PDC majors in his favour too but even an 8-0 lead wasn't enough!

Although it was a PDC event, the crowd really started to get behind Waites due to the underdog factor and once he'd got back on level terms, he didn't buckle under the pressure of getting a job done.

This match has been widely dubbed as one of the greatest matches in TV history, let alone the Grand Slam.

The cumulative average for both players was around 110 but the performance of Phil Taylor to maintain his sky high level throughout the contest to walk of the title was phenomenal.

His display is more impressive when you think about how he kicked from 8-7 down to run away with it even though Adrian Lewis finished with the slightly higher average of 111.

Taylor hit a 180 with his first visit and the pair combined for 32 in 25 legs! For context, the World Championship 180 record is 42 between Gary Anderson and Michael van Gerwen in the 2017 final - and that was in 44 legs.

The 2014 edition goes down in history because of this game rather than how Phil Taylor performed all the way through the tournament. And that speaks volumes for this display.

It was the best Kim Huybrechts has ever played and it just happened to be against Michael van Gerwen who didn't really do a lot wrong at a time in his career when he was just about to go title crazy!

Huybrechts incredibly won 11 out of 12 legs to go 12-3 up but just when MVG thought he was clawing his way back into the game at 7-13 down, the Belgian produced a magical nine-dart finish!

He maintained his composure to run out a 16-10 winner with an average of over 104.

Gerwyn Price won his first Grand Slam with a highly-controversial victory over Gary Anderson but it's this performance against Peter Wright which was particularly unplayable.

The way he beat Michael van Gerwen in the semi-finals with a 101 average showed tremendous character having lost to him 19 times on the trot before that and he maintained this momentum and belief in the final just a few hours later.

He showed no sign of mental fatigue as he averaged almost 108 - which was the second highest in a Grand Slam final after Phil Taylor's 109 against Gary Anderson in 2011 but the context surrounding Price merits inclusion in this list rather than that Power performance.