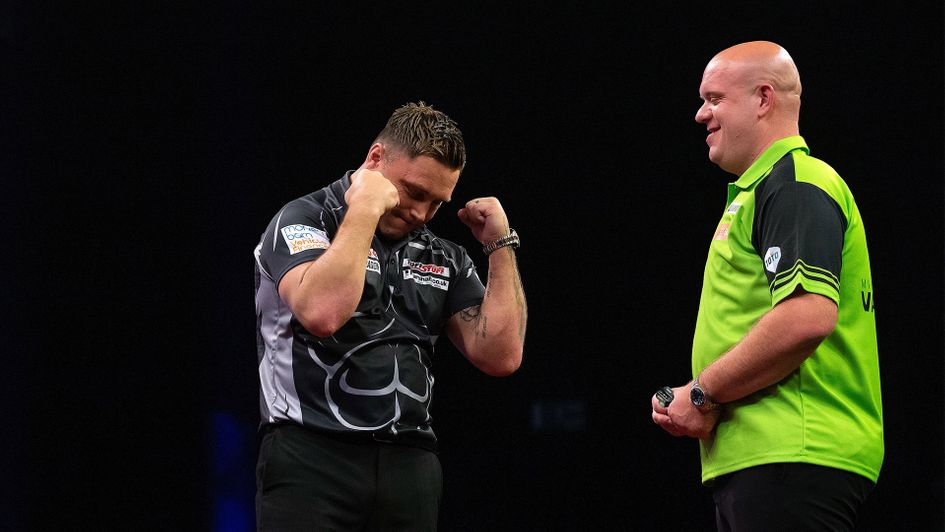 Gerwyn Price defeated Michael van Gerwen 6-5 in the final of Cazoo Premier League Night 14 in Sheffield to gain ground in the Play-Off race.

Price returned to form at the Utilita Arena, producing back-to-back 100 averages to reach the final for the first time since Night Three in Belfast when he landed two nine-dart finishes on the way to victory.

The Welshman pockets the £10,000 winner's bonus and picks up a crucial five league points which move him up to fifth, just two points adrift of Peter Wright who currently occupies the fourth and final Play-Off place.

Gerwyn Price wins a Premier League night for the first time since Week Three and The Iceman is the sharpest shooter in Sheffield!

"I don't think I was at my best today but I'm happy to win," Price reflected.

"The last couple of weeks I've been under the cosh and not playing well.

"I was under a lot of pressure tonight; I knew I needed to win two of the last three nights to make the Play-Offs.

"I know I'm in with a shout and if I win next week I'm back in the Play-Off places - as long as I get there I will be happy."

Van Gerwen made the early running in the final, taking leads of 3-1 and 4-2 but after the Dutchman missed four darts at double 12 for a 5-3 lead, Price pinned double two with his last dart in hand to make it 4-4.

Van Gerwen produced a showpiece shot on 95, hitting a single 19 and two double 19s, to send the contest to a deciding leg but Price held his nerve on throw with a 14-dart leg to seal a vital win.

Price's night began with a 6-4 quarter-final victory over Gary Anderson before seeing off Joe Cullen 6-3 in the semi-finals.

Van Gerwen picked up three league points with a third runner-up finish in four weeks thanks to victories over Wright and Michael Smith to join Jonny Clayton in securing qualification for the Play-Offs with two league phase nights to spare.

Losing semi-finalists Cullen and Smith leave Yorkshire with two points each thanks to quarter-final wins over James Wade (Bye) and Jonny Clayton respectively.

The Cazoo Premier League roadshow heads to The O2 in London on Thursday May 19 for Night 15 of the league phase, as Price looks to maintain his Play-Off push against countryman Clayton.

The night's other quarter-finals will see Van Gerwen play Smith, Cullen face Anderson, while Wade is set to return
Michael Smith against Wright.

Each night will see quarter-finals, semi-finals and a final played over the best of 11 legs (first to six). Each player will meet the other seven players twice over the course of the season in a quarter-final game, plus two further nights (Night Eight and Night 16) will feature additional fixtures in the same format. Those fixtures will be a draw bracket based on how the league table looks at the time. So, whoever is top will face the eighth-placed player in the first round.