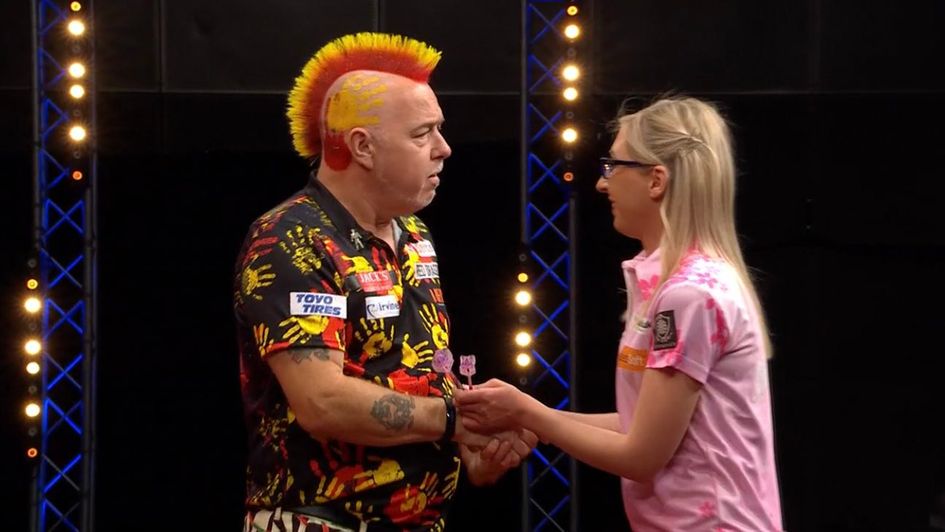 Peter Wright survived a real scare from Fallon Sherrock to reach the second round of the World Series of Darts Finals in Amsterdam.

In a repeat of their thrilling encounter at last year's Grand Slam of Darts, which Snakebite edged 16-13, Sherrock hit all four at her attempts at doubles in the opening eight legs at the sell-out AFAS Live.

Her classy finishing included a 73 on the bullseye as well as a 120 checkout in the eighth leg as she continued to punish the world champion's wastefulness on the outer ring despite a huge gulf in their respective scoring.

Peter Wright misses the bull for a spectacular 164 finish, and Sherrock punishes with a superb 120 checkout to level at 4-4!

The Scot produces a superb 177 to pressure the shot, but Sherrock nails the bull to seize the initiative!

However, the Milton Keynes star was unable to earn an attempt at a double in the last two legs, with Wright leaving her stranded on 82 and 56.

💯 Fallon Sherrock hit all four of her attempts at doubles but Peter Wright survived a real scare to beat her 6-4 at the World Series of Darts Finals.

Noppert raised the roof with a 170 checkout in his win over Whitlock to set up a meeting with reigning champion Jonny Clayton, while Van Duijvenbode came through a last-leg decider against New Zealander Puha and will next face Gary Anderson.

Vincent van der Voort was unable to make it a trio of Dutch successes as he went down 6-3 to Canada's Matt Campbell, whose next test will come against world number one Gerwyn Price.

Michael van Gerwen will begin his bid for a fifth World Series Finals title against Damon Heta, who ran out a 6-3 winner against Gordon Mathers in an all-Australian affair.

Leonard Gates enjoyed victory in his first TV appearance outside of USA, defeating Devon Petersen 6-4 to set up a clash with James Wade.

Gates' countryman Danny Baggish was narrowly denied in a last-leg decider by Ryan Joyce, who will now face top seed Dimitri Van den Bergh, while Dave Chisnall claimed a 6-3 win over Jamie Hughes and he will next meet Joe Cullen.

Saturday's second round winners will return for Finals Day on Sunday, when the quarter-finals will take place in the afternoon session before the semi-finals and final in the evening.