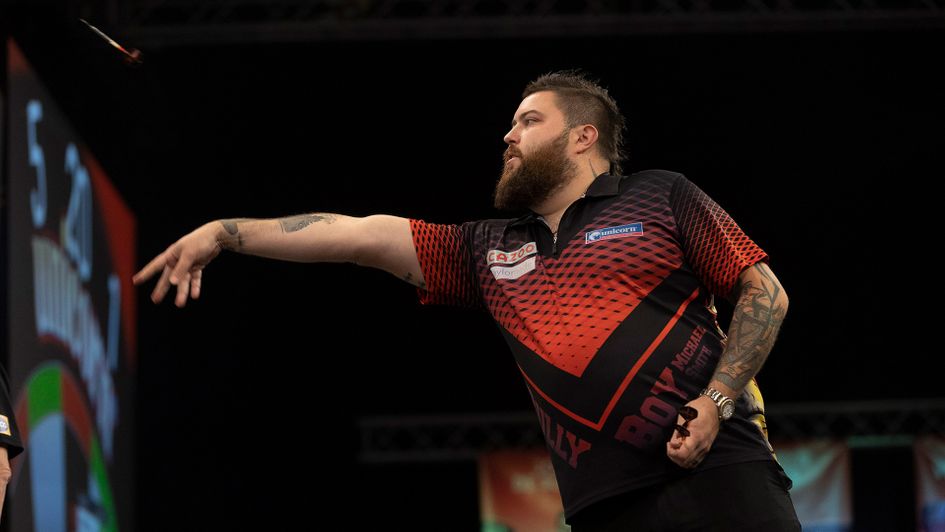 Michael Smith produced a stunning day of darts to earn his second title in two days at Players Championship 15 in Wigan on Wednesday.

Smith produced a nine-dart finish in his quarter-final victory over Florian Hempel, before averaging 109.95 in an 8-3 final win over Callan Rydz to back up Tuesday's first title of the year.

A second nine-darter of the day, as Michael Smith pins a perfect leg in his quarter-final clash with Florian Hempel at Players Championship 15!

An incredible standard of play across the event saw the Premier League star produce a further three ton-plus averages in reaching the final.

Smith was at his fluent best across the event, hitting 32 180s, though his day began with unspectacular victories over Glen Durrant and John Michael, before a 107.10 average saw him edge out Ritchie Edhouse 6-5.

The last 16 saw Smith come through another last-leg decider with Mario Vandenbogaerde before averaging 114.90, his highest of the day, in a 6-2 quarter-final victory over Hempel.

A 7-3 win over Alan Soutar sent Smith through to the final where a clinical 81% double accuracy saw him rack up his fourteenth win in two days to pocket the £12,000 top prize.

Meanwhile, Rydz produced ton-plus averages in all but one of his six matches, including a 104.13 in the final, as he reached his first ranking final since October.

Scottish youngster Nathan Girvan also hit a nine-darter in his first round loss to Adrian Lewis, with four perfect legs hit across two days of play in Wigan.

The ProTour action resumes this weekend with the Gambrinus Czech Darts Open (ET8), taking place in Prague from May 13-15 - live action will be broadcast on PDCTV.