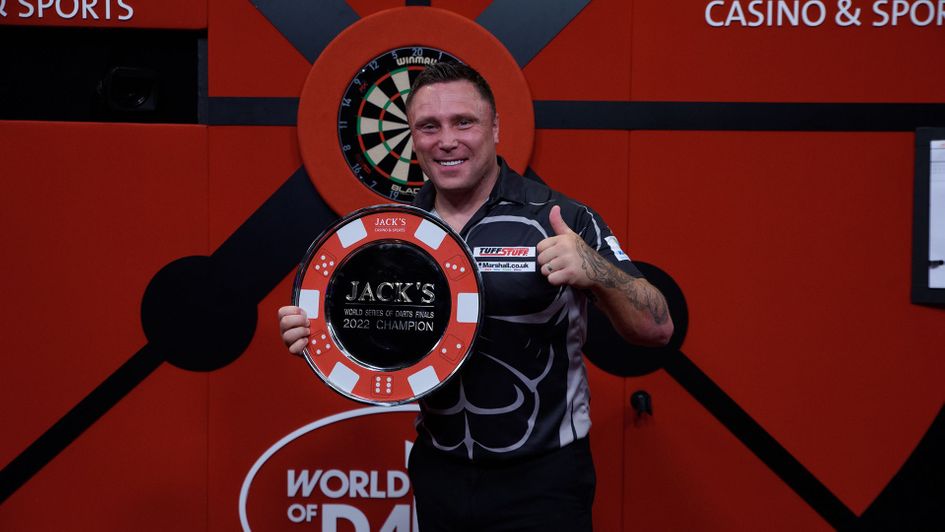 The Welshman, who last triumphed in this event back in 2020, was pushed all the way by the popular Dutchman in an enthralling final before holding his nerve with a 90 checkout that completed a 14-dart break of throw.

Price averaged 100.14, hit three 100+ checkouts and pinned 50% of his doubles but his inspired opponent kept the crowd on their feet by firing seven of the nine 180s in the match while his clinical finishing of 52.6% and 97.69 ensured the final remained on a knife edge until the very end.

👏 A thrilling end to the World Series of Darts Finals pic.twitter.com/bDvkGnukMl

"I'm thrilled to get over the line," said Price, who won £70,000. "Dirk played fantastic but I think I played a little bit better.

"It was a great game but I made it really difficult for myself. There were two or three legs where I missed doubles, and at five-all going into the second break I probably could have been 7-3 up.

"I knew from there on in it was going to be a tough battle; Dirk was playing really well and obviously the crowd were supporting him but I dug in there right until the end.

"I gave myself a chance in the last-leg decider and scraped over the line."

He added: "I'm more than experienced with these sort of crowds, and fair play to them - they were all cheering for their man but I think they were quite respectful in patches.

"I let him off the hook a couple of times but I just wanted to give myself a chance in the last leg - I've got a little bit more composure and experience than Dirk had in that leg and that's all that counted."

Van Duijvenbode had been roared on by a raucous crowd throughout a dream run this weekend, as he defeated Haupai Puha, Gary Anderson, Ryan Joyce and defencing champion Jonny Clayton to book his place in his second televised final.

But despite his spirited performance coming up just short against Price, who also beat him in the 2020 World Grand Prix final, 'Aubergenius' can take plenty of positives ahead of a big winter of majors.

"I was a bit unfortunate in the last leg and he showed his class," said Van Duijvenbode, who earned £30,000 as runner-up.

"It's a bit frustrating because apart from that class, I could have won it in the end if I just composed myself better."

A high-quality start saw the pair trade 14-darters in the opening four legs before Price broke for a 3-2 lead, before pinning tops to open up a two-leg cushion.

Three successive legs from Van Duijvenbode saw him move ahead again at 5-4, and he added a 12-darter as he retained the edge.

The Dutchman - who had taken out 112 in leg 15 - hit back with a superb 11-darter and fired in double four to move 10-9 up, putting himself on the brink of a maiden big-stage title.

Price showed his class with a 12-darter to take the final to a deciding leg, and after being first to a finish during a tense finale, the Welshman took out 90 to seal glory.

Price followed up Saturday's narrow win over Matt Campbell with a high-quality 10-8 quarter-final win over Joe Cullen, before seeing off James Wade 11-9 in the semis.

Wade had hit back from 2-0 down in the semi-final to lead 6-5 after landing a 170 checkout amongst three 12-darters, only for Price to reel off five legs in a row on his way to victory.

Gerwyn Price defies a spirited display from Joe Cullen to book his place in tonight's semi-finals!

Will the 2020 champion claim a second World Series Finals title this evening?

June's Dutch Darts Masters runner-up had previously survived a missed match dart from Ryan Joyce in the penultimate leg of their quarter-final.

Dirk van Duijvenbode edges out Ryan Joyce in a last-leg shoot-out to reach a televised semi-final on home soil!

He then ended Clayton's title defence with a superb 11-8 semi-final success.