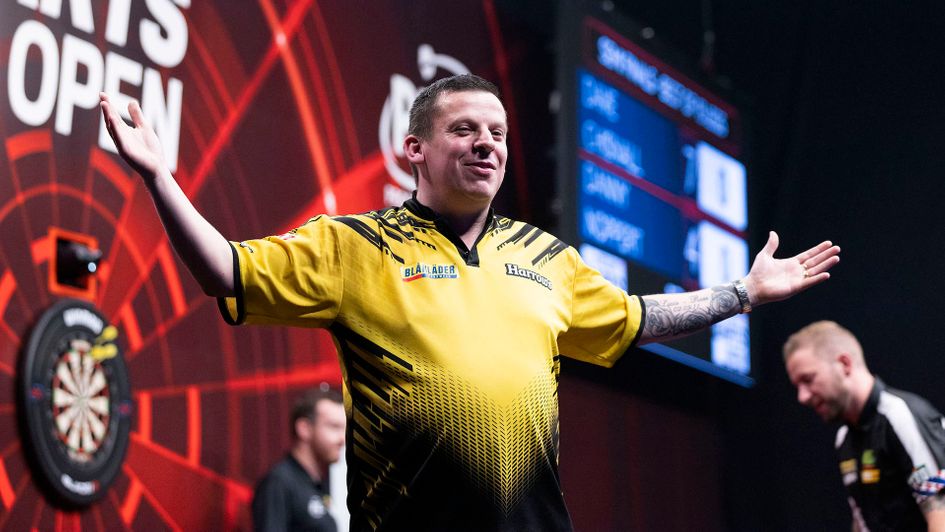 Watch: Dave Chisnall hits a nine-darter on his way to winning the Belgian Darts Open

Dave Chisnall hit the first nine-darter on the European Tour for three years en route to winning the Belgian Darts Open in Wieze.

Chizzy, who hit the last one at the Gibraltar Darts Trophy in 2019, sent the packed Oktoberhallen wild when achieving perfection in the first leg of his semi-final clash with Danny Noppert and maintained his focus to seal a commanding 7-4 victory with a 104 average.

Few better sights in sport than a Dave Chisnall nine-darter!pic.twitter.com/nFuPbEl79U

It was the 12th nine-darter of Chisnall's career although this was 'only' the third in front of a crowd having previously hit one at the televised Grand Slam of Darts in 2015 and the aforementioned Gibraltar event three years ago.

The St Helens thrower then came up against the unseeded Andrew Gilding in the final and after hitting the front at 3-2 following finishes of 112 and 86, he went on claim the third European Tour title of his career and 15th in the PDC with an 8-6 victory.

Chizzy, won the 2019 Danish Darts Open and the 2013 German Darts Championship, averaged 92.31 compared to Gilding's 89.69 while he hit three of the six 180s in the match and pinned eight of his 24 attempts at doubles.

"It's very special," said an emotional Chisnall. "Any tournament you win is special but this one means even more after a tough year personally.

"We've had a couple of family bereavements so this is for them. I had a terrible year last year but I'm coming back and there will be more trophies going in my cabinet.

"I've been saying for the last few weeks that this has been coming and this weekend it happened.

"The final was one of those games where we were both trying too hard to win a big tournament. Luckily for me that double 19 went in; I'm so happy."

CHISNALL IS THE CHAMPION IN BELGIUM 🏆

Earlier in the day Chisnall battled past fourth seed Nathan Aspinall 6-4 despite missing 21 of his 27 attempts at doubles and then came through an equally scrappy quarter-final against Jose de Sousa, running out a 6-2 winner with an 89 average.

A nine-darter on the way too in a brilliant weekend!

Now... good luck getting the trophy in your suitcase 🧳😂 pic.twitter.com/eE6lfBUKD9

Sunday saw the tournament reach its climax with last 16 matches in the afternoon, before the evening session saw the quarter-finals, semi-finals and final take place.

Hopes of a Belgian winner were ended in the last 16 as Kim Huybrechts - who defeated Michael van Gerwen in round two - went down 6-1 to Adrian Lewis.

German duo Gabriel Clemens and Martin Schindler fell at the quarter-final stage along with Lewis and De Sousa.

Seeds enter in round two