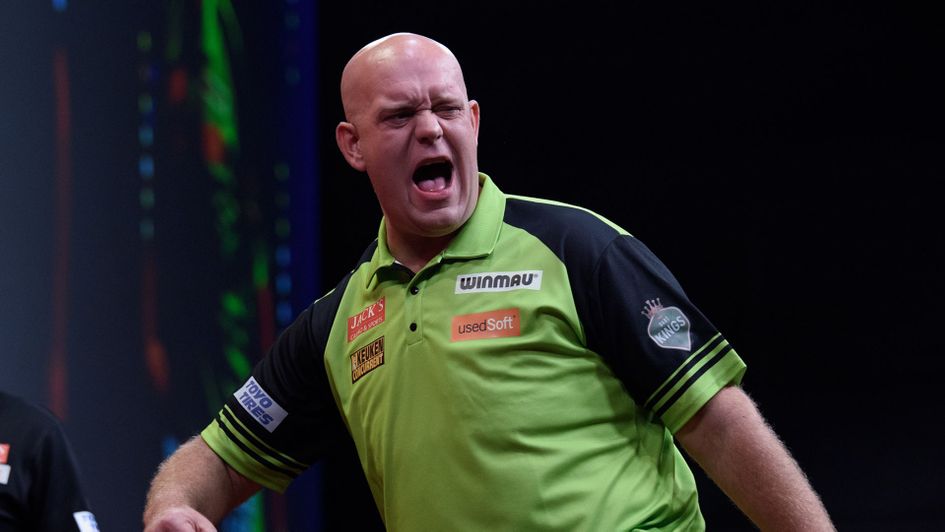 Four-time winner van Gerwen delighted the AFAS Live crowd with a 6-4 defeat of Damon Heta, although the Australian had hit back from 2-0 down to lead 3-2 and 4-3.

The Dutchman levelled with a 14-darter, then punished missed doubles from his opponent to move 5-4 up before double nine secured the win.

Look what that means to Michael van Gerwen!

The Dutchman cut a frustrated figure for large parts of that match, but he delivers the goods to close out a 6-4 win over Damon Heta!

Price gets out of jail

2020 winner Price prevailed against Matt Campbell in a deciding leg after the Canadian pushed the world number one all the way.

Price took out 113 to save the contest and utilised the advantage of throw in the decider to pin double ten and progress.

Price now plays Joe Cullen in the quarter-finals, after the Masters champion also went the distance to see off Dave Chisnall, who paid for eight missed match darts.

Chisnall led 2-0 and 5-2, but saw two match darts go begging in leg eight and six more in the tenth, before Cullen took the decider with the aid of a 180.

Wade, the 2018 champion, was a 6-4 winner against America's Leonard Gates, who hit back from 5-1 down to cut the gap to one leg before the left-hander closed out victory.

So the 2022 World Series of Darts finals ends with just 3 nations represented in the QF:

Only the inaugural #WSODFinals had such few different nations represented at this stage:

Michael Smith powered through to a tasty quarter-final against Wade with the performance of the second round, averaging 107.40 in a 6-4 win over Peter Wright.

The world champion averaged almost 103 in reply, but paid for missed doubles in three successive legs as Smith opened up a 4-1 lead.

Legs of 14 and 12 darts saw Wright pull back to 5-4, but a 101 finish saw Smith complete a superb display with six doubles from 11 attempts.

Bully Boy seals the deal with a second ton-plus finish, as Wright bows out despite averaging 102 himself!

Reigning champion Jonny Clayton was another impressive winner, as he overcame Dutchman Danny Noppert 6-2 with a 104.39 average.

UK Open champion Noppert took out 110 to get off the mark in leg three, but finishes of 118 and 146 in successive legs - alongside a second 12-darter of the game - helped Clayton surge through to an eagerly-awaited last eight meeting with Van Gerwen.

Number one seed Dimitri Van den Bergh suffered a second round exit to Ryan Joyce, with the qualifier claiming a clinical 6-2 success to reach the final day.

Joyce will be up against home star Dirk van Duijvenbode, after the Dutch Darts Masters finalist reeled off four straight legs to come from 3-2 down and defeat Gary Anderson.