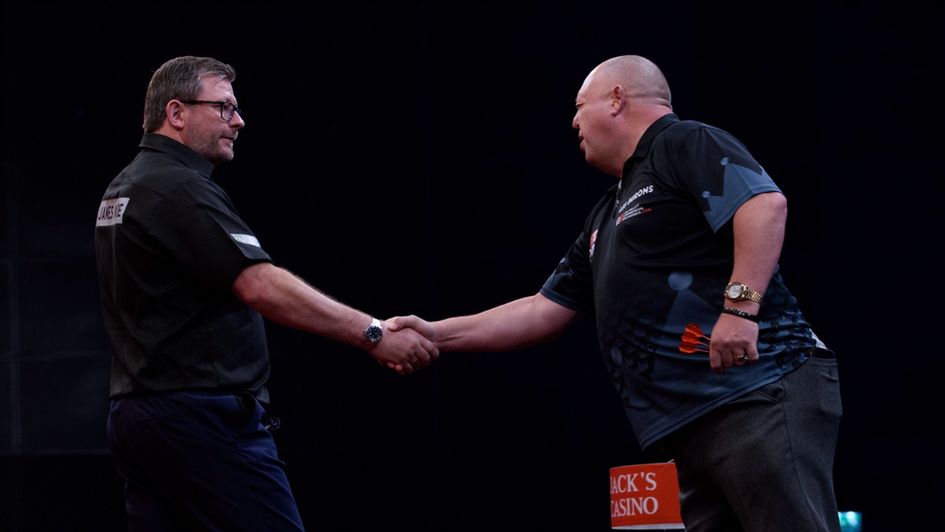 Mervyn King produced a record average at the Jack's World Series of Darts Finals as he stormed past James Wade on Friday night, while four Dutchmen also progressed in Amsterdam.

King produced his highest televised average of 115.62 in a ruthless whitewash of Wade, also creating a record for the event in a sensational performance.

2018 champion Wade was denied a dart at a double as King moved into a second round tie with Latvia's Madars Razma on Saturday.

King took out 144 in the opening leg, and also landed legs of 12, 11 and 12 darts during a relentless performance in which he finished six doubles from nine attempts and fired in four 180s.

Kuivenhoven set up an all-Dutch second round tie with 2019 winner Michael van Gerwen courtesy of a stunning doubling display - hitting six doubles from as many attempts in a 6-2 defeat of John Henderson, closing out the win with a superb 146 combination.

Dirk van Duijvenbode set up a rematch of the 2020 World Grand Prix final by taking a 6-2 win from his all-Dutch clash with Jeffrey de Zwaan.

De Zwaan hit back from 2-0 down to 3-2 by taking out 170 and then hitting six perfect darts in an 11-darter, only to see Van Duijvenbode claim successive 14-darters as he pulled clear for victory.

Vincent van der Voort came from 2-0 down against Nathan Aspinall to move through to the last 16 with a 6-3 win, creating a contest with Premier League champion Jonny Clayton on Saturday.

Aspinall made the brighter start but saw Van der Voort - buoyed by the support of his home crowd - take five successive legs as he pulled clear to progress.

Qualifier Niels Zonneveld delighted the AFAS Live crowd with a 6-3 defeat of Dave Chisnall, as the left-hander moves into a meeting with two-time World Champion Gary Anderson on Saturday.

Zonneveld secured an early break of throw in taking a 3-1 lead, and held his cushion before landing double ten to secure a memorable win.

2019 runner-up Danny Noppert was unable to join his fellow countrymen in round two, losing out 6-2 to Jose de Sousa as the Grand Slam of Darts champion hit six doubles from seven attempts.

Legs of 13 and 14 darts gave Noppert an early 2-1 advantage, but De Sousa reeled off the next five without reply, ending the tie with an average of almost 104 as he moves through to face Dimitri Van den Bergh on Saturday.

"I'm very happy with the win," said De Sousa. "I did everything possible to win this game, I'm not 100 percent but my confidence is high.

"Since the European Championship I'm coming back little by little to my game and for me it was a big game."

Krzysztof Ratajski will meet Nordic Darts Masters runner-up Fallon Sherrock in round two after his 6-3 defeat of Gabriel Clemens.

Clemens took out 117 and an 11-darter as he moved 2-1 up, only for Ratajski to turn the tie with three straight legs before closing out victory.

The Jack's World Series of Darts Finals continues on Saturday, with the eight seeded players entering the action against Friday's winners.

The tournament is being broadcast live on ITV4 in the UK, through the PDC's international broadcast partners including DAZN and RTL7, and on PDCTV for Rest of the World Subscribers.