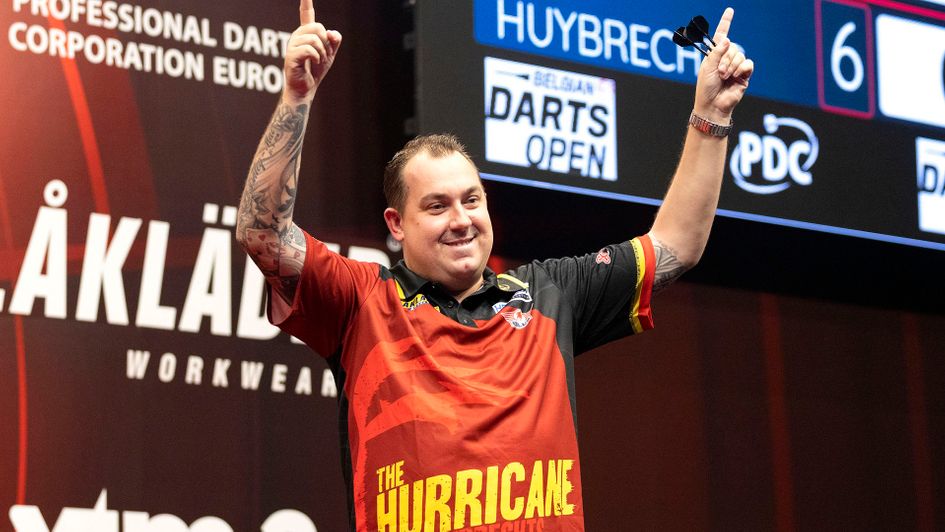 Kim Huybrechts and Mike De Decker delighted their home crowd with first round wins as the 2022 Belgian Darts Open began in Wieze on Friday.

The inaugural PDC European Tour event at the Oktoberhallen opened as 32 qualifiers competed for spots in Saturday's second round, with Huybrechts and De Decker joining seeded star Dimitri Van den Bergh as local favourites in the last 32.

"I've played in the Premier League and World Championship but this was very special," said Huybrechts. "The crowd were unbelievable and they pulled me through.

"This was an amazing night and I can't wait to play Michael tomorrow now - it will be another fantastic night."

De Decker, meanwhile, won an all-Belgian tie with big-stage debutant Remo Mandiau 6-3 as he moved through to a tie with reigning European Champion Rob Cross.

There was, though, disappointment for four other Host Nation Qualifiers on Friday, as Andy Baetens, Wouter Vanrolleghem, Francois Schweyen and Roberto Vandaele all tasted defeat.

Madars Razma closed out hard-fought 6-4 victory over Baetens to deny the Belgian on his European Tour debut, and the Latvian's reward will be a second round tussle against UK Open champion Danny Noppert.

Mervyn King held off a fightback from Vanrolleghem to claim a 6-3 win and a tie with Dirk van Duijvenbode, with the Belgian qualifier hitting back from 5-0 down to 5-3 before the veteran star closed out victory.

Dutchman Jelle Klaasen will take on Dave Chisnall in another tasty tie on Saturday, landing a timely 12-darter to wrap up a 6-4 win against Schweyen, while Czech star Karel Sedlacek defeated Vandaele by the same scoreline.

Belgian number one Van den Bergh takes to the stage in his homeland against Andrew Gilding, who prevailed in a deciding leg against Simon Whitlock after the Australian hit back from 3-0 down to take their game all the way.

Ross Smith took a huge step towards claiming a qualifying spot at the BoyleSports World Grand Prix with a 100 average in his 6-2 win over Steve Beaton.

Smith also finished 6/12 doubles in an impressive showing as he moves through to play Jose de Sousa on Saturday, having moved above Rowby-John Rodriguez into a provisional spot for next month's double-start event in Leicester.

"It was an absolutely huge game for me," admitted Smith. "I've been playing really well lately and I'm here to win so it's not job done yet."

Boris Krcmar claimed a crucial 6-1 win in his bid to qualify for the European Championship, punishing a profligate display from Cameron Menzies to move through to a clash against Adrian Lewis on Saturday evening.

Keane Barry landed a spectacular 134 finish to complete an emphatic 6-2 victory over American number one Danny Baggish, and the UK Open semi-finalist will now face tenth seed Jonny Clayton for a place in Sunday’s third round.

Bradley Brooks produced a 14-darter in the deciding leg to claim a first career win over Chris Dobey, as the former World Youth Champion set up a meeting with Ryan Searle.

Jamie Hughes won a clash of former European Tour event winners with Vincent van der Voort by a 6-3 scoreline to create a second round tussle with Nathan Aspinall.

Niels Zonneveld recorded his first victory on the European Tour in 2022 with a 6-2 success against Alan Soutar, and World Champion Peter Wright now awaits the Dutchman in round two.

Ryan Meikle was another 6-4 winner as he saw off 20-year-old Dutchman Gian van Veen to progress to a tie with Gabriel Clemens.

Coverage will be streamed through DAZN for viewers in Germany, Austria and Switzerland and through PDCTV for subscribers in all other territories, as well as through bookmakers worldwide, with coverage also live on VTM2 in Belgium.