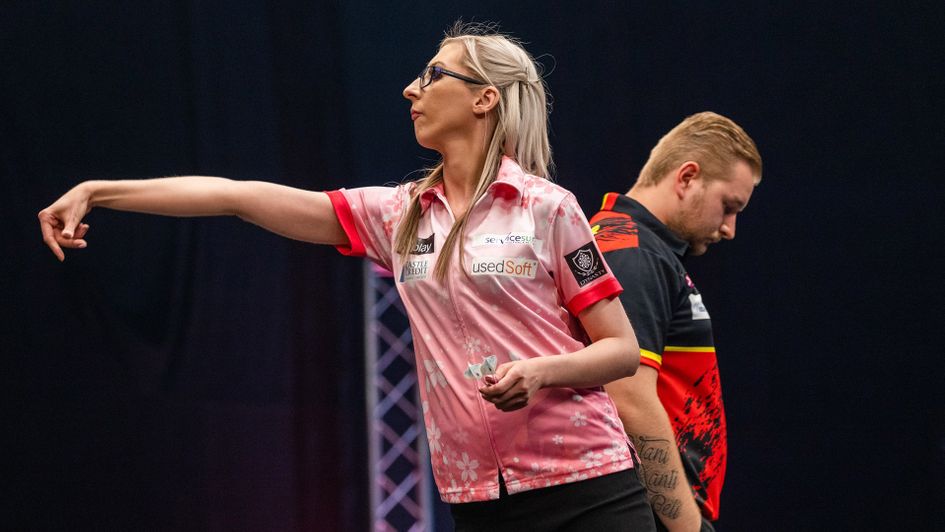 Dimitri Van den Bergh has heaped praise on Fallon Sherrock for her stunning comeback against him at the Nordic Darts Masters.

A dramatic semi-final between the pair in Copenhagen on Saturday saw Van den Bergh surrender leads of 8-2 and 9-3, missing eight match darts as Sherrock claimed an unlikely 11-10 triumph.

Victory for Van den Bergh would have seen him reach the final of two of his three latest televised outings, but the world number five was typically magnanimous in defeat.

Speaking in a live Moneybarn Q&A with Dan Dawson and fans, Van den Bergh said: "I was very surprised to win the first two sessions 4-1 because Fallon missed a lot of doubles.

Fallon Sherrock completing her comeback from 8-2 down to beat one of the very best players in the world 11-10 in her first PDC stage event of the year is astonishing pic.twitter.com/dSlQlBI64d

"I have no idea what happened from being 8-2 up, I couldn't find trebles or doubles and she was coming on strong putting me under pressure.

"From my point of view it was my game to lose because I had those eight match darts, but on the other side you've got to be honest, she did fantastic to do a come back like that.

"You've just got to take it on the chin and say fair play to her, She's a great player, nothing to do with the fact she's a woman

"I think it's brilliant what she's doing for darts, but that doesn't come into my thinking when I play her. I see her as an opponent not a woman.

"Every time I play darts it doesn't matter if you are male or female, you should never underestimate another player but you see it happen all the time.

"I think that was a slight advantage I had in my early days as a professional; you get underestimated and boy, did I surprise them!