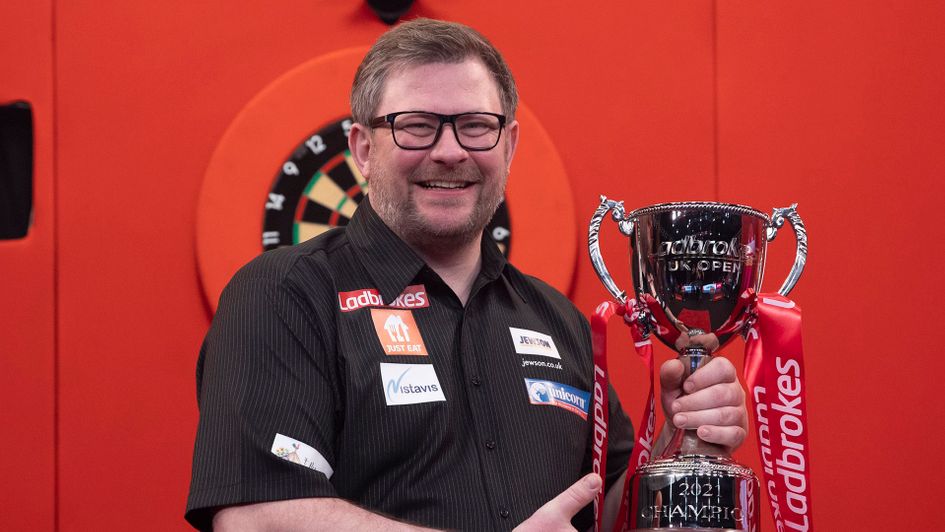 The Machine's landmark moment at the Marshall Arena means he's now won big TV tournaments in each of the last three decades having claimed his first at the 2007 World Matchplay - and the same can also be said of his three successes in this event.

Wade, who beat Gary Mawson and Wes Newton in the 2008 and 2011 editions respectively, produced a superb comeback to see off Simon Whitlock 10-8 in Sunday afternoon's quarter-finals before a surprisingly one-sided 11-6 victory over world champion Gerwyn Price sealed his place in a 24th major final.

The 37-year-old had lost his last three, including the 2020 European Championship to Peter Wright and Grand Slam of Darts to Jose De Sousa, but on this occasion he ruthlessly punished Humphries for his wayward finishing to run out a comfortable 11-5 winner.

😲 To think he's not in the Premier League!pic.twitter.com/jkskdFdzzF

Wade averaged 102.52, threw five of the nine 180s in the match and pinned almost 41% of his doubles while the 2019 World Youth champion struggled to produced the same remarkable levels that had helped him average 107 in an 11-5 thrashing of defending champion Michael van Gerwen around an hour earlier in his first senior TV semi-final.

The Aldershot thrower's first major since the 2018 European Championship means he's just the second player after Phil Taylor to win televised PDC titles across three decades and pockets £100,000 to move above Rob Cross into fourth in the world rankings, making his Premier League omission even more eye-opening.

He told www.pdc.tv: "To win TV titles across three decades is something I'm very proud of. I'm enjoying it again, I think I've reinvented myself. I'm very happy to be in the world of darts, it's a great place to be when you're winning.

"I'm here to provide stability for my son and winning these allows me to do that. Luke is quality, he's a gentleman and he showed his quality in the way he dismantled Michael [van Gerwen] in the semi-finals."

Humphries' average of 98 was still highly creditable for his maiden final at this level but it would have been a lot higher had he not missed 20 of his 25 darts at doubles, which was of stark contrast to him pinning 11 out of 16 against MVG.

That's not as much as his two previous biggest paydays of £50,000 from back-to-back quarter-final runs at the 2019 and 2020 World Championship but he'll surely but this weekend down as the most significant in his promising career.

Humphries headed into the tournament as a 125/1 outsider and there didn't seem much logic to back him for a long run based on recent form, dating back to his humbling at the hands of Paul Lim at the Ally Pally last December and his disappointing performances at last week's Super Series.

But his displays in Milton Keynes will have restored any lost belief that he can mix it with the very best on the biggest stages for the rest of the season and beyond.

"It's been an incredible weekend for me, an emotional weekend," he said.

"To reach a TV final is the most unbelievable feeling. I think James is the best player in the world under pressure and he showed it in that game.

"I'm here to achieve big things in darts and this run puts me in good stead going forward.

"I want to be playing the best players week-in, week-out. I know I've got the game to do it. Tonight it wasn't my night, but I'm proud of what I've achieved."

Here's the moment James Wade became the Ladbrokes UK Open Champion for the third time in his career! pic.twitter.com/Symoclxdzo

Luke Humphries produced the performance of his life to thrash Michael van Gerwen 11-5 and reach the final of the UK Open.

The 2019 World Youth champion was competing in the last four of a major for the first time in his young career having pipped Dave Chisnall 10-9 earlier in the day but you wouldn't have guessed it as he averaged 107, pinned almost 69% of his doubles and threw four 100+ checkouts in a nerveless display against the defending champion.

Unreal from Luke Humphries. This checkout sums up his 11-5 victory over Michael van Gerwen that puts him into his first major final.

He was 125/1 before the UK Open began!pic.twitter.com/a9kVanwhjJ

Cool Hand powered into a 4-0 lead thanks to finishes from 112, 132 and then 108 before MVG hit back with one of 139 to complete a 12 darter in a barnstorming start to proceedings.

Humphries was far from fazed as he took four of the next five legs, including a pair of 12-darts, to maintain in full control although MVG just about kept himself alive by reducing the deficit to 9-5.

The 26-year-old, whose previous best major runs came at the World Championship when reaching quarter-finals in the 2019 and 2020 editions, promptly fired in a 128 checkout before the final interval becoming completing the job straight after it with a clinical finish from 78.

🔥 Luke Humphries certainly didn't play like someone in their first ever major semi-final!

The Newbury thrower will now face James Wade, who moved into his 24th major PDC final - and his third at the UK Open - with a surprisingly one-sided 11-6 victory over Gerwyn Price.

The Machine hadn't been this far in the tournament since winning it for the second time back in 2011 against Wes Newton and it's not been an easy journey either having been drawn with Ryan Joyce (10-9), Rob Cross (10-7), Gabriel Clemens (10-5) and Simon Whitlock (10-8) in the previous rounds.

Wade flew out of the blocks and was averaging well over 100 when opening a 5-0 lead at the interval, although his task was made easier by Price being well below his best in the very low 90s.

The world champion, who had blown hot and cold this weekend having only recently returned to full health following an ear infection that ruined his Super Series, tried to fire himself back up when taking the sixth leg but his celebrations when taking his next at 7-2 were much more ironic as his cause looked lost.

Back-to-back 13-darters, however, gave Price renewed real hope as he reduced the gap to 7-4, only for Wade to nip the comeback in the bud with a classy 82 checkout for a 12-darter.

From there he was able to keep the Welshman at comfortable arm's distance before closing out victory. Wade avagered 97.63 compared to Price's 96.68 and hit seven of the 11 180s in the match, while his finishing was also superior as he pinned 11 of his 19 attempts, with Price missing 10 of his 16.

World Champion Gerwyn Price falls at the semi-final stage as James Wade blows him away with a dominant 11-6 victory!

Who will he face? Up next 👉 Van Gerwen v Humphries pic.twitter.com/B5Gt5gjLeR

Defending champion Michael van Gerwen defied an early onslaught from Krzysztof Ratajski to reach the UK Open semi-finals for the fifth time in his career.

The Polish Eagle picked up where he left off last night - when he'd averaged 104 in a brutal 10-3 demolition of in-form Jonny Clayton - by storming into an early 2-0 with back-to-back 11 darts and he repeated the trick in the eighth leg for a commanding 5-3 lead.

Van Gerwen, however, fought back brilliantly to take six of the next seven legs to move 9-6 ahead and although Ratajski did pull one back, the Dutchman completed victory in style with a 126 checkout.

MVG averaged 102.82 compared to his opponent's 104.14 while his finishing was far superior as he hit 10 of his 17 attempts of his doubles, with Ratajski spurning nine of his 16.

🏆 Will it be another Price v MVG final?pic.twitter.com/ftFEPctVSm

Van Gerwen will next meet surprise package Luke Humphries, who produced a stirring late comeback to beat Dave Chisnall 10-9 as he reached his first ever televised semi-final.

The 26-year-old has previously only saved his best for the biggest stage of all having reached back-to-back World Championship quarter-finals in the 2019 and 2020 editions but back in December he crashed out to Paul Lim.

Since then he managed to win only three of his eight matches in the four Super Series tournaments last week and arrived in Milton Keynes as a huge 125/1 outsider for glory.

Humphries, who previously saw off Martijn Kleermaker, Ryan Searle and Martijn Kleermaker, started very brightly as the underdog against Chisnall by opening up a 5-2 lead only for the St Helens man to go 100+ checkout crazy, with finishes from 153 and 155 to complete a pair of 12-darters before another clinical effort of 100 put him one leg from victory at 9-7.

However, Chizzy wouldn't get another attempt attempt at a double as 'Cool Hand' won the last three legs to advance with a 99 average compared to his opponent's 96.

Luke Humphries recovers from 9-7 down to beat Dave Chisnall and reach the Semi-Finals of the @Ladbrokes UK open for the first time in his career! pic.twitter.com/uX7b7c2vOs

The world champion edged the averages 100.71 to 99.21 in a high-class showdown which went all the way to a deciding leg which Price ultimately ran away with in 13 darts.

Apart from when the African Warrior went 2-0 and 5-3 up in his second UK Open quarter-final, there was never more than one leg separating the pair in a see-saw encounter that Price needed all his battling spirit to win.

Price was comfortably outscored on the maximum count 9-2 but he pinned 10 of his 17 darts at doubles as Peterson missed 10 of his 19.

Gerwyn Price seals his spot in the Last 4 after pinching a deciding leg victory over Devon Petersen! pic.twitter.com/W6dNubq3lA

The Iceman, who was also runner-up in this tournament to Peter Wright in 2017, will now meet James Wade for a place in his third UK Open final after the Machine edged past Simon Whitlock 10-8 in the first match of the day.

Wade, a two-time UK Open champion in 2008 and 2011, looked as though he was heading home at 8-5 down but won the next five legs on the trot, including a superb match-winning checkout of 147.

Five consecutive legs for James Wade secures his place in the semi-finals after producing an epic fightback to defeat Simon Whitlock 10-8! pic.twitter.com/KRzsG90WrM

Playing in his third UK Open quarter-final, Whitlock was hoping to reach the last four in this tournament for the first time in his career and bombarded Wade with a flurry of 180 while a 124 checkout completed a 12-darter in the 13th leg to move two from victory.

However, the Wizard's doubling deserted him and Wade, who hit 50% of his attempts at the outer ring compared to his opponent's 36.36%, ruthlessly made him pay in the closing stages.