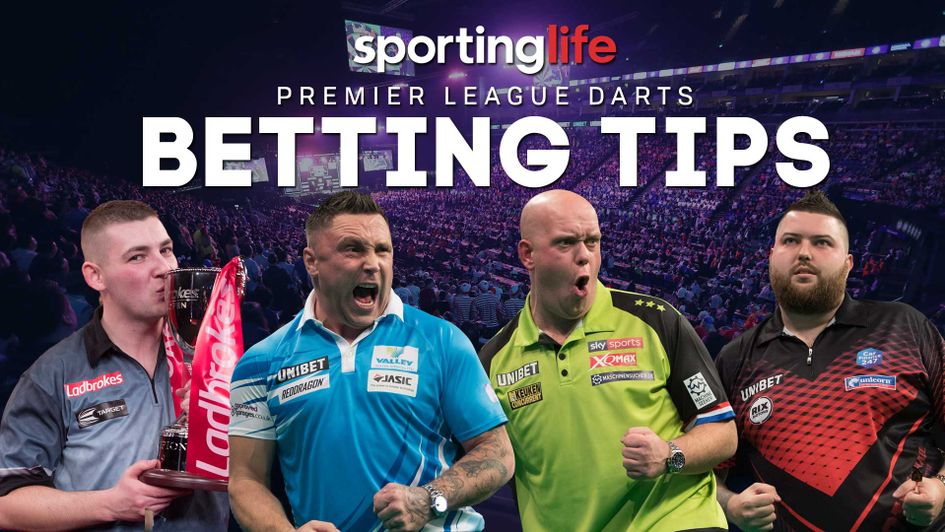 The Premier League Darts heads to Nottingham on Thursday night

Nottingham hosts the sixth round of Premier League Darts fixtures on Thursday night and we have match-by-match predictions, best bets and suggested accas.

Have we all recovered from John Henderson's tremendous comeback against Michael van Gerwen last Thursday night?!

Who needs trophies when you're this popular.

John Henderson has helped create one of the greatest darts atmospheres ever known! The scenes when he hits tops!pic.twitter.com/AhN2U3Ccr2

Although this week's 'Contender' Nathan Aspinall, who will be fondly thought of by readers of these pages after he was tipped up at 125/1 to win the recent UK Open (sorry I had to throw that in again!), won't be able to create quite the same atmosphere as Big John managed in Aberdeen, his World Championship semi-final rematch with Michael Smith promises plenty of entertainment.

The match of the week, however, is Gerwyn Price's bid to remain the only player unbeaten in the Premier League this season against the man who usually would be but isn't - Michael van Gerwen.

Below I run through all the fixtures, complete with head-to-head records, season stats so far, match verdicts, suggested bets and accas - plus a reminder of how the table looks.

Click on the odds for more Sky Bet match markets

Surely I can't back against the man who I tipped at 125/1 to win the UK Open?

Nathan Aspinall wins his first major title with a 170 checkout!

And to think he was 125/1 to win the #UKOpen before a dart was thrown! pic.twitter.com/KVQHzQf1KH

Obviously the reasons given for backing Nathan Aspinall to star at the Butlin's Minehead Resort still stand - and if anything are more resounding after proving his performances at the World Championship were far from flashes in the pan.

Aspinall's maiden televised title, which was sealed thanks to victories over Rob Cross and Gerwyn Price on the final evening of an absorbing weekend, not only helped him surge into the world's top 16 but also made him a very rich man, cashing a second cheque for £100,000 in three months!

I doubt anyone backed the Stockport man, who also shocked MVG 6-1 on the floor earlier this season, with enough stage to earn quite as much themselves and, for the foreseeable future at least, you won't see him at those kind of odds again.

Anyway, tonight he makes his Premier League debut as this week's 'Contender' in a World Championship semi-final rematch with Michael Smith, who badly needs two points to avoid getting cut adrift from the top four.

Ally Pally runner-up Bully Boy, who ended Aspinall's superb debut in one of the matches of the tournament, only has three points after a sluggish start to the season and his only victory came just three days after his surgery to remove an abscess from his leg.

Smith defied the pain to reach the UK Open semi-finals that same weekend before losing to Rob Cross, who then produced one of his best performances of the season to sink the St Helens man 7-3 last Thursday night.

Bully Boy averaged 100.21 but only earned five attempts at doubles which tells its own story so he'll need to up his game - and I think he will.

Despite his slow start, Smith is still the top 180 hitter with 18 so backing him to defeat Aspinall and have most maximums at 2/1 is the way to go for this one.

Smith will have enjoyed a week focusing on his practice without competition to get in the way this past weekend and the motivation to get some much needed points on the board will be greater than Aspinall's.

James Wade has made a greater start to his Premier League return than anyone - apart from himself - would have expected.

Not only is he proudly sat at the top of the standings after five fixtures but he inflicted Michael van Gerwen's first defeat a fortnight ago, boasts the highest tournament average, the best individual match average and the most superior checkout percentage while he's also joint second in the 180s chart with 16.

For a player known for his timing, that ain't bad!

The 2018 European and World Series champion, who also carried his resurgence into 2019 by reaching the Masters final, was sensational in recording just the 10th Premier League whitewash of all time against Daryl Gurney last Thursday, averaging 109.59 and hitting seven of his nine darts at doubles.

🎯 It's only the 10th whitewash in Premier League Darts history!pic.twitter.com/0q3uYdLZX5

His opponent's confidence was shot, having also suffered a brutal beating seven days earlier at the hands of Rob Cross, and only managed two darts at a double.

Expect this clash in Nottingham against Mensur Suljovic to be far tighter as the Austrian seeks his second victory of the season get his play-off hopes back on track.

Poor finishing cost him dear against the far more clinical Gerwyn Price in Aberdeen but apart from that he's not been too shabby on his doubles so I anticipate an improved performance in that area of the game, and you wouldn't have thought Wade can play quite so well again.

The 2/1 on Suljovic is quite a tempting price on its own but I'm going to be slightly bolder and back him at 7/2 to win, score over 1.5 180s and have a checkout of over 76.5. They are pretty tame targets he should achieve if he's to defeat the Machine.

Regular readers of my Premier League tips will know I've been predicting a change in Raymond van Barneveld's fortune this season and the closest I've got to being right is two comeback draws!

And even during those performances against Gerwyn Price and Mensur Suljovic, he couldn't average higher than his pretty mediocre best so far of 95.36 and it looks like his farewell tour will sadly end with a whimper.

When the ultimate fan favourite comes back from the brink against a pantomime villain. Incredible atmosphere, great comeback and sportsmanship at the end.pic.twitter.com/RhaeQdBmWk

What he didn't need this week was scrutiny over his marriage and private life ahead of a fixture with an in-form Rob Cross, who put Michael Smith to the sword last Thursday as he moved onto seven points.

Life away from the oche could possibly be playing its part on his lack of success on it but we can only go off what we've seen him performance-wise this season. And it's not good.

However, I still maintain Barney can still produce some moments of magic, even when we least suspect it, and while it's hard to make a case for him winning, he's shown enough fighting spirit in a couple of games to suggest he can stay in touch of Cross.

On the most recent edition of the Sporting Life Darts Podcast last week, I claimed that Gerwyn Price was better than Michael van Gerwen - but only at this exact moment in time.

He clearly won't go on and win the same amount as titles MVG will this season, but he's certainly playing with a lot more confidence and flair while the Dutchman struggles in a rare patch of below-bar darts.

The Grand Slam of Darts champion, who has won two Players Championship events this season and also reached the UK Open semi-finals, is gradually turning public opinion around thanks to his string of inspired displays and he can probably expect a decent amount of support on Thursday night as he bids to keep the only unbeaten record in tact.

In the space of a few weeks, Gerwyn Price is quickly completing his journey from public enemy number one to fan favourite.

Incredible transformation and credit to @Gezzyprice for sticking to his guns and playing some fantastic darts...pic.twitter.com/OmKAyY3pzM

That said, we perhaps shouldn't over egg the pudding as far as Price is concerned.

The Welshman is 'only' averaging 97.71 in the Premier League this season - boosted by a best of 104.11 - although on the other hand he'd be top of the table on his own had it not been for that Barney comeback in week two.

As for Van Gerwen, the world of darts can never seem to make their mind up as to whether he's vulnerable or not. Before the World Championship his dominance was being widely questioned, then he wins it with ease for the third time to silence the doubters before cruising to a fifth successive Masters crown.

Two more Players Championship titles follow, the second of which he outrageously hit a nine-darter without a 180, as we all purred over his brilliance only for the wheels to come off in dramatic fashion.

A 6-1 defeat on the floor to Aspinall, a Premier League defeat to Wade, a UK Open exit at the first hurdle to Mervyn King and an incredible draw with John Henderson in Aberdeen in a short space of time have made him look human once again.

You could have said that last week but I actually sided with Henderson on the handicap - just like I did for Wade seven days earlier - and it should at least be a close encounter.

Those targets are very obtainable, especially if the match goes long, but I will also add Price at +1.5 legs on the handicap into my acca.

The real Peter Wright might just be about to stand up on a more consistent basis on last week's evidence and on Thursday night he faces a player who has effectively been missing in action for the past fortnight.

Snakebite posted a superb average of 106.64 and hit 50% of his doubles in his sound beating of a wounded Raymond van Barneveld in Aberdeen and he'll be pretty pleased to be just one point outside the top four having not enjoyed the best of seasons so far.

Two battling draws against Rob Cross and Michael Smith - the latter of which a real steal - a pretty poor win over Steve Lennon and a defeat to Mensur Suljovic put him under pressure while he crashed out early in the UK Open and his floor form has been disappointing too.

That said, he did average 106 in a thoroughly entertaining defeat to Suljovic at the aforementioned major so perhaps there were signs that an impressive victory was on the cards and he'll be confident this can continue.

Daryl Gurney, by contrast, must be feeling pretty low after losing his last two Premier League games against Rob Cross and James Wade by an aggregate of 14-1 and there's been no PDC events over the weekend for him to get that out of his system.

He's not even been firing on his usual 180s cylinders, hitting just seven maximums in his five matches so far, while Wright is joint second in the charts on 16.