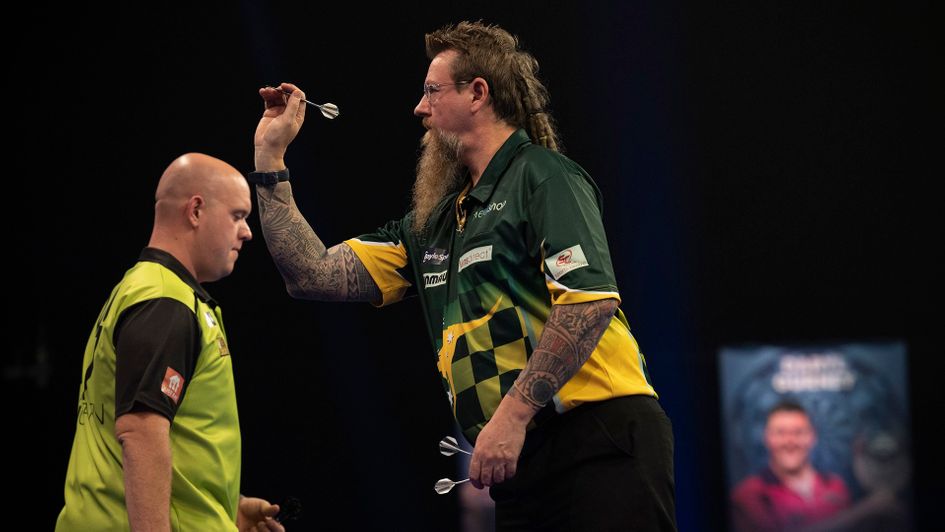 A review of Saturday's action at the Boylesports World Grand Prix, as Michael van Gerwen and Gary Anderson both suffered shock exits in the quarter-finals.

Simon Whitlock knocked Michael van Gerwen out of a major tournament for the second time this year as he produced another stunning display to reach the semi-finals of the World Grand Prix in Coventry.

The 51-year-old, who was only called into the unique double-start event on Tuesday after Adrian Lewis tested positive for Covid-19, thrashed MVG 11-4 at the World Matchplay back in July but this 3-0 rout at the Ricoh Arena was even more impressive.

Whitlock averaged over 100 for the second time this week - a particularly superb feat in this format of the game - while he won nine of the 11 legs played to move one win away from his second World Grand Prix final.

Simon Whitlock is Michael van Gerwen's new bogey player. Beats him 11-4 in the World Matchplay and now 3-0 in the World Grand Prix, winning 9 of the 11 legs played.

The 2017 runner-up may have benefitted from van Gerwen's woeful finishing but much of that was down to his relentless standard that applied consistent pressure to a player short on his usual title-winning form.

Whitlock hit three 180s, missed just five starting doubles, always got away with his first visits and clinically pinned nine of his 17 attempts to finish a leg.

An early break in this one as Whitlock punishes Van Gerwen with a big 107 checkout on D14 to double his lead in the opening set! pic.twitter.com/tppocbZjII

The world number one, by contrast, hit two maximums, averaged 96, failed to get away three times, missed 16 starting doubles in total and spurned 10 of his 12 at the business end of legs.

Four of those came at the start of the second set when Whitlock punished him with a a pair of double tops and went on to whitewash him in emphatic fashion with just 43 darts used.

Four missed darts at double for Van Gerwen there as Whitlock fires in two tops for a ton out and he leads in the second set! pic.twitter.com/fnw474puRL

THIS IS INCREDIBLE FROM WHITLOCK!

Simon Whitlock is playing unbelievably well here as he averages almost 105 in that second set and he's sweeping Van Gerwen aside!

He won that set in only 43 darts! pic.twitter.com/15bJrx2UK2

Five-time champion MVG, who was aiming to win this title for a third year in a row, was unable to show any real signs of recovery during the third set and this hammering will cause the critics to circle yet again in a deeply disappointing season compared to his usual standards.

The 2012 European champion told www.pdc.tv: "I think it's one of my best performances and I'm delighted to be showing people what I can do. I was relentless and I didn't let up, and I put Michael under pressure in every single leg.

"It was pretty flawless and there weren't many bad darts there. I'm still on a freeroll but I'm good in this format and I showed my true potential tonight - 90 percent of my practice is doubles so it doesn't surprise me.

"Michael's the best player on the planet and he's number one in the world for a reason. I beat him at the World Matchplay when he wasn't at his best but I thought he played well today and I was that little bit better.

"There's no pressure on me. I'm on a freeroll and I'm taking my chances, and I feel amazing."

Whitlock will now take on Dutchman Van Duijvenbode for a place in Monday's final, with the winner of their last four clash also set to qualify for November's Grand Slam of Darts.

"It's a great opportunity for both of us," added Whitlock. "Dirk's played some great darts to get through so far and I'm definitely not taking him lightly.

"He's just beaten one of the best players in the world, Gary Anderson, so I've got to put him under pressure too and play the best I can against him. I think we will have a great game.

"I've been in the final before and I'm just going to give everything. I know I can beat any player on my day - I feel as good as anybody, I'm playing probably as well as I ever have."

Gary Anderson's hopes of winning the World Grand Prix for the first time in his illustrious career are over after a shock 3-1 defeat to debutant van Duijvenbode.

The 2016 runner-up looked as though he was warming up nicely for a genuine title tilt over the past two rounds and few could argue that a quarter-final with the world number 73 was a lot easier on paper than the other possible options.

Indeed, van Duijvenbode was as big as 18/1 to win this quarter of the draw before a dart was thrown and 200/1 for the title, but now he finds himself in his first televised semi-final.

DIRK IS INTO THE SEMIS!

Dirk van Duijvenbode is in disbelief as he closes out a magnificent 3-1 victory over Gary Anderson on his World Grand Prix debut!

The Dutchman was LETHAL on D16 all night and you can see how much that win means to him.

📺 UP NEXT: Chisnall v Cullen pic.twitter.com/L5sdp48WIE

Playing in what was also his maiden major quarter-final, the Dutchman edged a tight first set 3-2 with a 96 checkout in the decider before taking the second 3-1.

Van Duijvenbode missed a match dart when attempting to take out 152 at 2-2 in the third set and Anderson pinned tops to cut the deficit in half.

However, the 28-year-old bounced back from that momentary disappointment with 14 and 13 darters at the start of the next set, which he took 3-1 to complete a famous win.

Van Duijvenbode told www.pdc.tv: "It's the best win of my career, I'm so happy," said the 28-year-old, who previously defeated Mensur Suljovic and Dimitri Van den Bergh this week. "It feels awesome for me and I can't believe it that I'm in the semi-finals.

"I was the underdog against Mensur and Dimitri but I didn't have the feeling that I could beat Gary because I've always been a big fan of his and I've never believed I could beat him before.

"I was very nervous when I went 2-0 up because I've never beaten Gary before but I kept believing in myself.

"Every time I progress I feel better and tonight I felt like I played my normal game. It wasn't my best game but I played well and Gary wasn't at his best."

Van Duijvenbode averaged 94.29 compared to Anderson's 88 and hit two more 180s with four while he hit 11 of his 22 finishing doubles as his opponent spurned eight of his 15.

Gerwyn Price is now the tournament favourite after he reached his first World Grand Prix semi-final after a fairly routine 3-1 victory over Jeffrey de Zwaan.

The two-time Grand Slam of Darts champion, who is chasing his second TV title in a matter of weeks having won the World Series of Darts last month, averaged a shade over 90 in a solid performance that reached its climax with a match-winning 164 checkout.

Gerwyn Price seals his spot in the semi-finals in STYLE with a massive 164 finish to defeat Jeffrey de Zwaan 3-1!

Price also hit five 180s, missed 13 starting doubles and only failed to get away once during the 16 legs played while he pinned 10 of his 25 attempts to finish.

De Zwaan failed to reach the same impressive levels he reached 24 hours earlier against Gabriel Clemens as he averaged 82, managed just one maximum and missed 14 starting doubles, although he never fired a blank.

The Dutchman, who was also a late entrant like Whitlock due to Stephen Bunting's positive Covid-19 test, showed some fighting spirit when taking the third set 3-1 but lost the fourth pretty meekly by the same scoreline.

"It was a good win and I'm happy that I'm still in," said Price. "I enjoyed it but I was a bit patchy at times. Jeffrey upped his game a bit in the middle but I was always confident.

"I'll need to improve to beat Dave. I'm the only seed left but you can't take that for granted and I'll just look forward to playing Dave, and hopefully I can win that.

"As long as I hit my starting doubles I can out-score most people. I was confident before the tournament but it's going to be a tough game with Dave.

The Welshman will now meet two-time runner-up Dave Chisnall, who came back from the brink of defeat for the second match in a row to keep alive his dream of a first major TV title.

Chizzy survived seven-match darts against Ryan Joyce to complete a victory from 2-0 down on Friday and he found himself facing the same deficit against Joe Cullen in his fifth Grand Prix quarter-final.

Despite opening the match with a 150 checkout, he missed nine darts to win the opening set and a further five in the second as the Rockstar edged closer to his second career televised semi-final.

But the popular St Helens thrower threw his second 150 checkout of the match to complete a 12-darter at the start of the third and went on to race through it 3-0 to get into the match.

Dave Chisnall has yet again kicked off a set with a sensational 150 checkout on D18! pic.twitter.com/4882lJaUoq

Chisnall carried thatcher’s momentum into the fourth set, which he won 3-1 thanks to a stunning finish from 155 to seal a match-levelling 12-darter.

Chizzy is on FIRE here with those ton-plus finishes as he adds a 155 to his two 150s and he levels the match at two sets apiece! pic.twitter.com/UybdizwDkT

When Chisnall moved 2-0 up in the decider, it was then the 2018 European Championship semi-finalist's turn to show fighting spirit by forcing a sudden-death leg but he couldn't finish 115 and paid the price.

"I should have been two nil up and I was really disappointed but I knew if I hit my doubles I could win because I was scoring well.

"I kept battling and I think I deserved to win. When I got a set back, I thought I was going to win again. I never give up and I'm here to do a job, and luckily for me I got through.

"I'm here to win it, and it's up to the other players to stop me. I've got a great chance but I've still got to perform - hopefully I won't go two sets down in the semi finals too!"