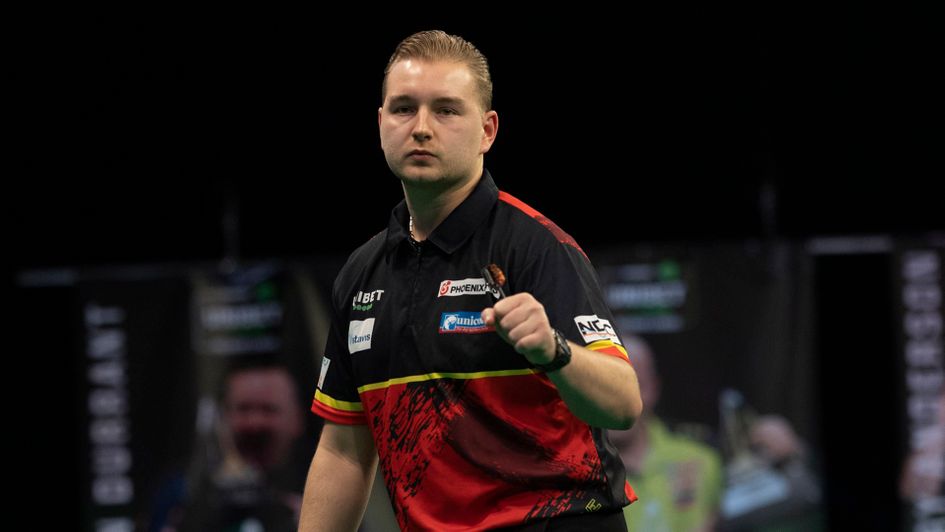 Dimitri Van den Bergh picked up his maiden Players Championship title with a superb 8-7 defeat of Dirk van Duijvenbode as PDC Super Series 3 came to a close in Niedernhausen on Tuesday.

The World Matchplay champion and two-time World Youth Champion has previously lost out twice in ProTour finals, but scooped the £10,000 top prize in Players Championship 12.

The success came in dramatic fashion, as Van Duijvenbode followed up Monday's maiden senior title with a gutsy display 24 hours later and pushed the Belgian all the way in the final.

Van den Bergh opened the decider with a 12-darter and led 3-0 and 4-1, before the World Grand Prix finalist reeled off the next three to level the tie - twice punishing missed doubles from his rival.

The next two were shared before Van den Bergh took out 116 and 104 to move to the brink of victory at 7-5, and though Van Duijvenbode saved the tie with a clutch 88 finish and then forced a decider, the Belgian posted a 180 and pinned double 12 for a 13-darter to claim the title.

The Belgian denies the double for the Dutchman! pic.twitter.com/UwZeAzG5Ff

The Unibet Premier League joint-leader posted ton-plus averages of between 101.5 and 108.8 in his opening four matches as he defeated John Brown, Ian White, Alan Soutar and Ryan Searle in style.

He then had to edge out Scott Mitchell 6-5 in the quarter-finals, and ran out a 7-2 winner in the semi-finals against Danny Noppert before seeing off another Dutchman in the decider.

"I'm proud and happy to finally get that first win on the ProTour," said Van den Bergh. "It's something I didn't expect, but it happened.

"It's all about the hard work. I played so good in the beginning of the day, so strong, but the longer the day took I felt that my game was going down.

"It's one of those days that you didn't expect to win, but you are winning. I came here and I've done my best, but I also performed."

Van den Bergh will now return to the UK for the third block of Premier League nights from May 5-7, as he seeks to continue an impressive debut season.

"I'm in a good position," he said. "I never expected myself to be in the position that I am, but I'm enjoying the moment and riding the wave.

"Everybody wants to be in the Premier League, I am and I'm just loving the experience."

Van Duijvenbode was bidding to join the elite list of players to win back-to-back ProTour titles, with his performances including ton-plus averages in 6-0 whitewash wins against Berry van Peer and Simon Whitlock.

He also defeated Danny Baggish, Peter Jacques, Mike De Decker and Robert Thornton on his way to the final on another memorable day.

Former UK Open and World Grand Prix winner Thornton reached his first semi-final on the circuit for almost two years with some fine darts on Tuesday.

A PDPA Associate Member who was given the chance to top up the field of 128 players in Niedernhausen, he overcame Premier League star Nathan Aspinall and Sunday's winner Michael Smith on his way to the last four, as well as averaging 105 in a victory over Martin Schindler.

Noppert won through to his second semi-final of 2021 as he picked up five wins on the day, including defeats of two of the finalists in the previous three days, Luke Humphries and Martijn Kleermaker.

Daryl Gurney was a quarter-finalist for the second time in 2021, while Scott Mitchell reached the last eight for a second successive day and Whitlock overcame Michael van Gerwen during his run to the same stage.

The day also featured a fourth nine-darter in as many days, as Krzysztof Ratajski achieved perfection during his first round win over Keane Barry.

Last 16 onwards. For all the results and detailed stats from the Super Series, head to Dart Connect (tv.dartconnect.com/events/pdc)