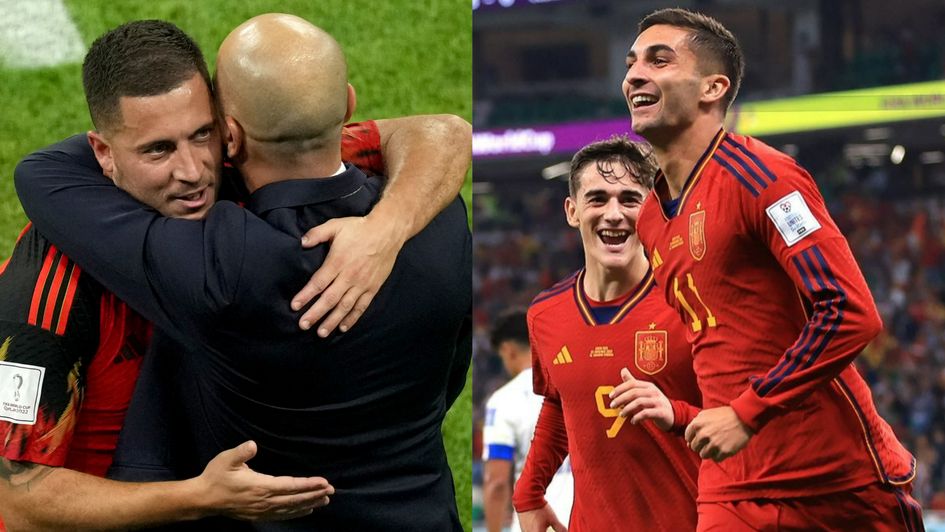 We deliver the xG (expected goals) scoreline, a 'fairness' rating and noteworthy data points as Japan shocked Germany while Spain dominated and Belgium rode their luck against Canada.

Big guns Belgium rode their luck to avoid becoming a victim of another World Cup shock as Michy Batshuayi's goal got their Group F campaign off to a winning start despite arguably being outplayed by Canada.

The Canadians, making their first appearance at the finals since 1986, were simply sensational in the first half but failed to take their chances, most notably Alphonso Davies' penalty which was saved by Thibaut Courtois after Yannick Carrasco's handball.

And they were punished by Batshuayi's clinical finish on the stroke of half-time as he pounced on a ball over the top to crash a fine finish past Canada keeper Milan Borjan.

Defeat was harsh on John Herdman's side, who had 22 shots on goal and almost tripled Belgium's Expected Goals tally of 0.99 with 2.88 but Tajon Buchanan and Jonathan David passed up their best opportunities.

After an enthralling first half, the second had far less action - just 0.75 xG combined.

Spain recorded their biggest-ever World Cup win as a 7-0 thrashing of Costa Rica underlined their credentials as tournament contenders in Qatar.

The contest was over within 31 minutes as Dani Olmo, Marco Asensio and Ferran Torres, from the penalty spot, rewarded one-touch passing and movement that Costa Rica could not live with.

Torres grabbed his second before Gavi – who became Spain’s youngest-ever goalscorer in June – and substitutes Carlos Soler and Alvaro Morato completed the rout, in which Spain recorded 3.66 xG.

Costa Rica failed to register a single shot at goal, ending the game with nothing but 18% possession to show for their tame efforts.

Spain tear their opponents apart while allowing nothing at the other end.#ESPCRC | #FIFAWorldCup pic.twitter.com/FamNbbdyRA

The World Cup provided another shock on Wednesday, with Japan coming from behind to beat Germany.

It was a game full of chances, with the teams combining to generate the most xG in a match at the tournament so far with 5.76, sailing past France's 4-1 win over Australia (5.16) where the world champions created 89% of the xG.

Germany can count themselves a tad unfortunate to lose, racking up a host of chances but failing to convert them.

Infogol calculates, based on the chances created in the game, that the Germans had just an 11.3% chance of netting only once. For contrast, they had a 17.4% chance of scoring six times.

From re-simulating the teams' chances we can calculate that Japan had only a 17% chance of winning the game compared to Germany's 63%.

The result wasn't quite as 'unfair' as Saudi Arabia's win over Argentina (37.55%) according to our ratings, but Japan were certainly fortunate.

Morocco and Croatia shared the third goalless draw in a little over 24 hours of World Cup football, joinin Denmark and Tunisia, and Mexico and Poland by cancelling each other out.

In a game of few chances, the Croats created by far the best opportunity when Nikola Vlasic (58%) was denied by Morocco goalkeeper Bono from close range in first-half injury time.

The North Africans managed just eight shots equating to 0.51, an average xG per shot of just 0.06 which won't get it done.

All-in-all the result was a relatively fair one, and the game did produce the lowest combined xG total in a World Cup game so far (1.47), edging past the curtain raiser between Qatar and Ecuador (1.55).