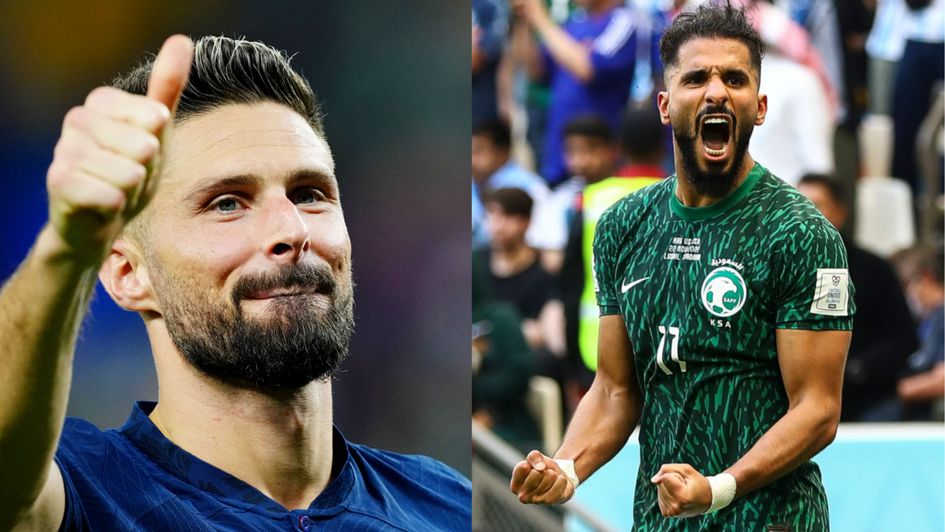 We deliver the xG (expected goals) scoreline, a 'fairness' rating and noteworthy data points as Saudi Arabia shocked Argentina and France thrashed Australia on day three of the World Cup.

Holders France recovered from falling behind early to start the defence of their crown with an emphatic victory.

Despite a number of injures rocking the French squad - Karim Benzema, N’Golo Kante, Presnel Kimpembe, Christopher Nkunku and Paul Pogba are all absent - there was no shortage of fluidity as Didier Deschamps' side racked up an enormous 4.25 xG.

France created six non-penalty 'big chances' (0.35 xG+) across 90 minutes that was a major shift from their pragmatism of 2018, when Les Bleus only generated more than 2.0 xG once, with their highest total just 2.16.

The current holders get their World Cup campaign underway with a convincing win.

One of the biggest shocks in World Cup history took place on Tuesday as 33/1 Saudi Arabia beat pre-tournament second favourites and footballing giants Argentina to send a seismic shock through the tournament.

Sorry to kill the buzz, but victory for the underdogs was incredibly fortunate based on the quality of chances created in the game, firstly highlighted by the fairness rating of 37.55% - by far the lowest at the tournament and one that will take some surpassing.

Not only did the Saudis allow 2.30 xGA, but they managed to rack up just 0.15 xGF, making it the worst attacking display of any team we have seen so far. We calculate that the Green Falcons had just a 1.0% chance of scoring twice in the game, with it more likely (3%) that Argentina scored six times from their chances. 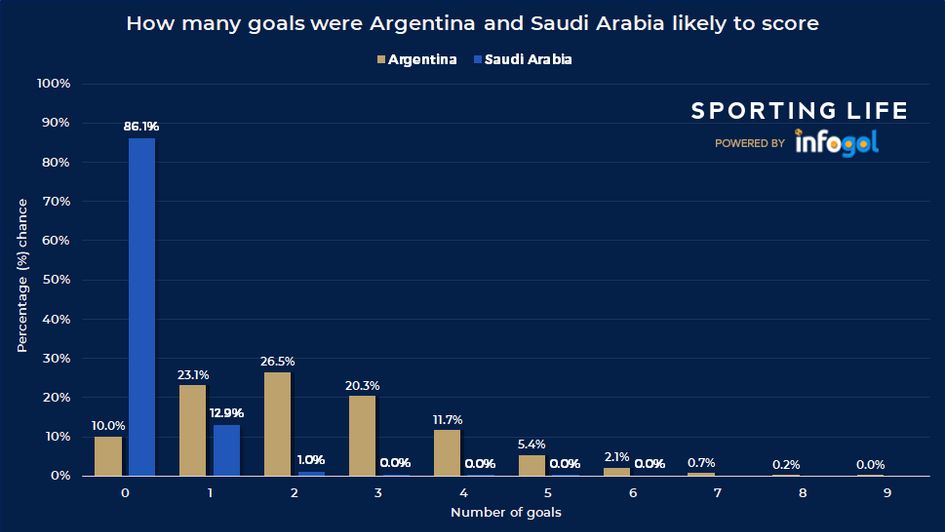 Overall, based on the chances created, there was just a 2.6% chance of Saudi Arabia winning the match.

Denmark and Tunisia played out the first goalless draw of the 2022 World Cup, with the pair very evenly matched throughout.

The teams created just one 'big chance' (+0.35 xG) each with Kasper Schmeichel making a wonderful save to deny Issam Jebali (56%) in the first half and Denmark striker Andreas Cornelius (51%) failing to adjust his feet out quickly enough to finish from close range as time ran out.

All in all, a draw was a fair result, and the 0-0 draw was in fact the fairest result of the World Cup so far according to Infogol's ratings.

Robert Lewandowski’s hunt for a World Cup finals goal goes on after his missed penalty (0.80 xG) meant Poland had to settle for a point in an untidy and goalless Group C encounter with Mexico.

Mexico goalkeeper Guillermo Ochoa, playing in his fifth finals, got down to his left to deny Lewandowski a 77th international goal and Poland's only real chance in the game.

Lewandowski took advantage of a lucky ricochet in the 53rd minute to muscle his way towards goal and Hector Moreno could only stop him by grabbing handfuls of his shirt.

Ochoa’s save sent the predominantly Mexican crowd into raptures, but they failed to capitalise on the boost in what was essentially a bore draw.