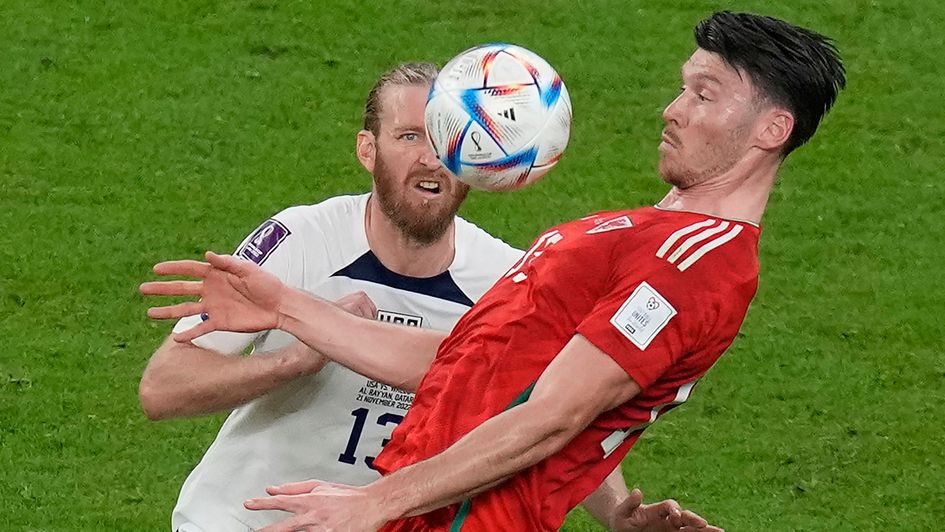 Having proven himself to be a crucial contributor for Wales over the years, Kieffer Moore will be eager to stamp his mark on the upcoming World Cup as well.

With Wales' ageing stars in Gareth Bale and Aaron Ramsey, who are both still vital components of the squad, winding down their careers and not playing that regularly at club level, the stage is set perfectly for Moore to impose himself at the showpiece.

Desperate to impress in what will be Wales' first World Cup appearance since 1958 and in solid form for Bournemouth in the Premier League, there's no better time for the experienced 30-year-old to shine.

“I’m thrilled, it’s hard to put into words really. It’s such a major thing and for this to finally come around and to be a part of it, to make history with Wales, it’s something special," a delighted Moore gleamed on Bournemouth's website upon hearing the news of his selection.

“It’s massive and everything we’ve strived to achieve. For a nation as small as ours to be on the world’s biggest stage is everything for us. For me personally, it’s a culmination of everything I’ve put into football. All the countless hours that people don’t see.

“The World Cup is the pinnacle of football and to be a part of that and to actually be in that moment of playing there is something special. It will be something that will be with me forever.

"It’s going to be such a big experience and having prior experiences such as the Euros under our belt, it’s going to be massively helpful for us. We’re eager to show the world what Wales can do and how successful our nation can be.” 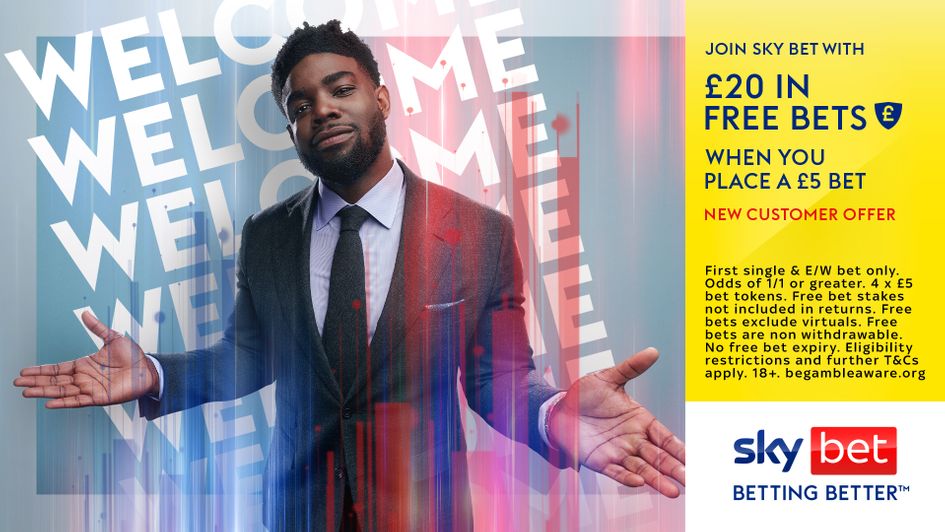 Standing a towering 196cm, Moore does a fine job of leading the line for Rob Page's men whenever deployed, which is illustrated by the fact that only Bale has outscored him (seven to six) since Page took over roughly two years ago.

Considering Wales prefer playing a direct brand of football and don't typically dominate possession, his presence is crucial to offering them a quality target when they go long.

So quick to judge the ball's trajectory and at adapting accordingly, this, in combination with his decent leap, size, hulking strength and timing, ensures he wins the majority of his aerial duels.

As a result, he's a master at helping his team win second balls in midfield with headed knockdowns or obliging runners with flick-ons to inject impetus into attacks. 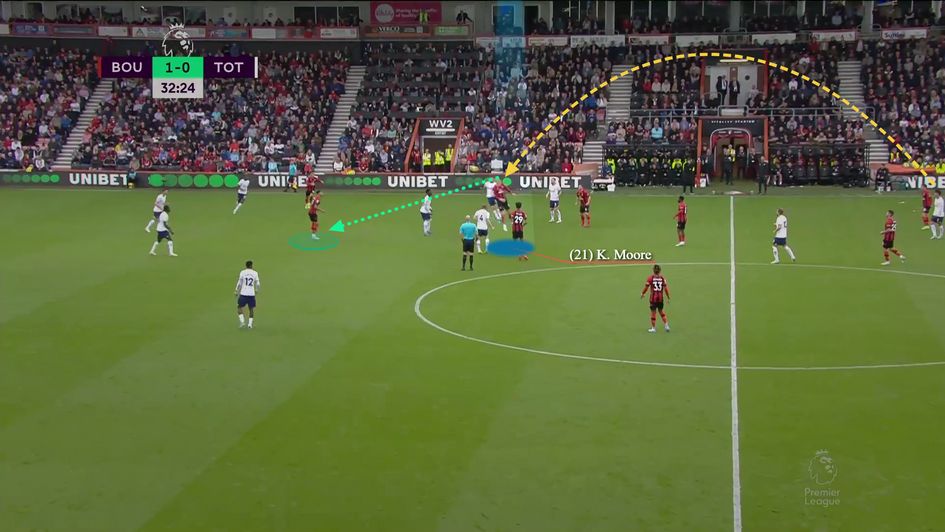 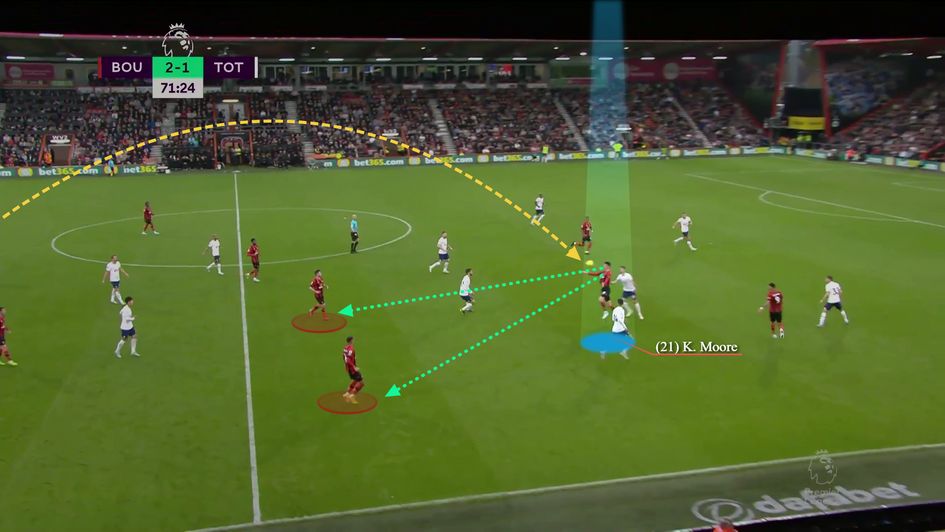 His aptitude in this regard also extends to when his team are looking to fire crosses into the box from a variety of locations, for his shrewd reading of the play and knowledge of what areas to attack amplifies his scoring menace.

Whether it be darting towards the near post, staying central as defenders are drawn out, holding his run as defences collapse deeper or exploiting back-post zones with astute blindside runs, opponents certainly have a difficult time keeping tabs on him. 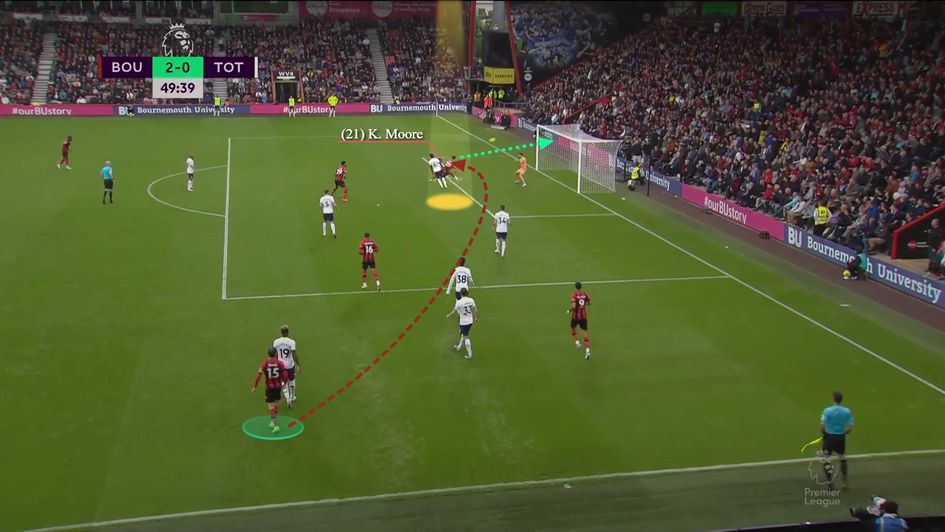 A wonderfully timed run and headed finish against Tottenham 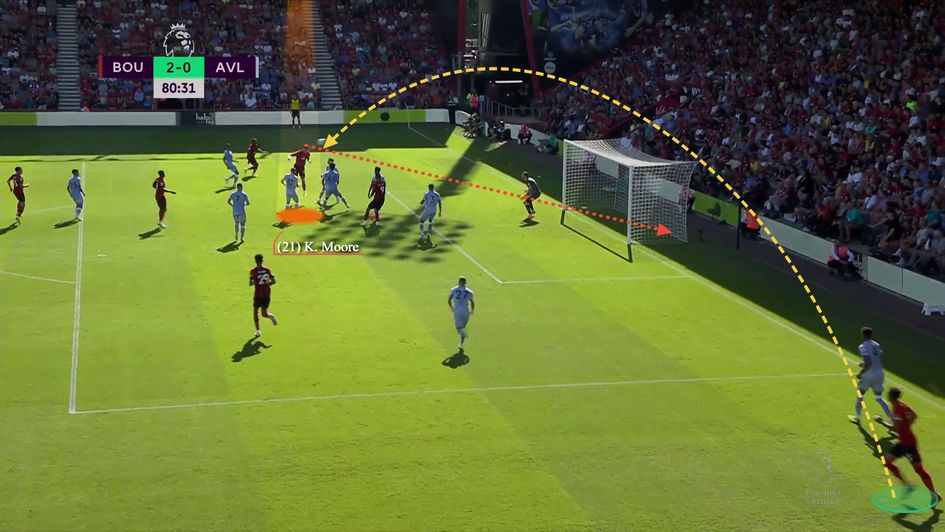 A powerful and well-placed header to score against Aston Villa 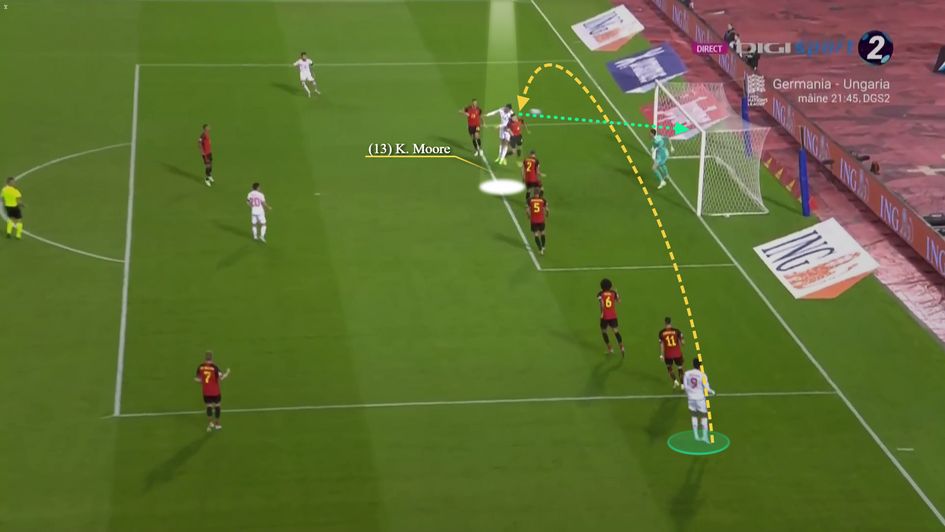 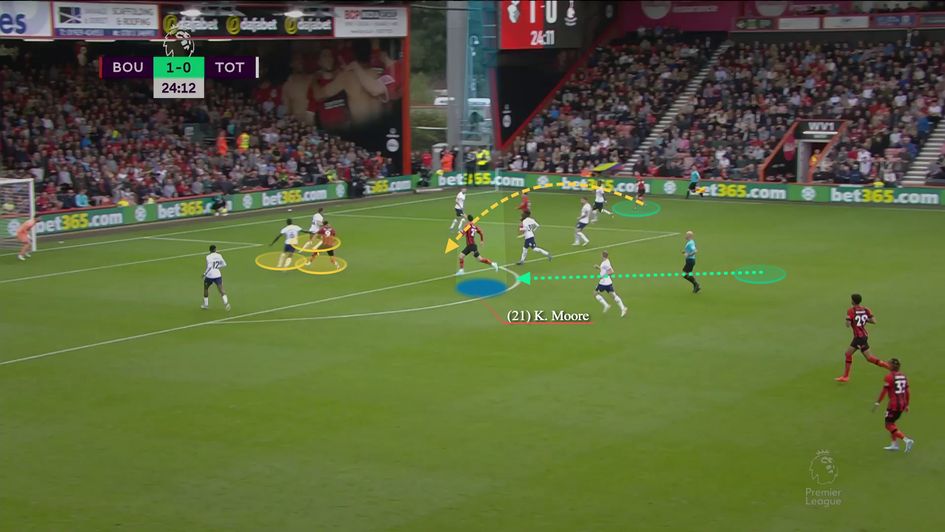 To focus on the latter, his blindside runs are nigh on impossible to stop, for he gains a dynamic advantage over his more stationary, ball-facing opponents so he can use his momentum to rise above foes to attack crosses. 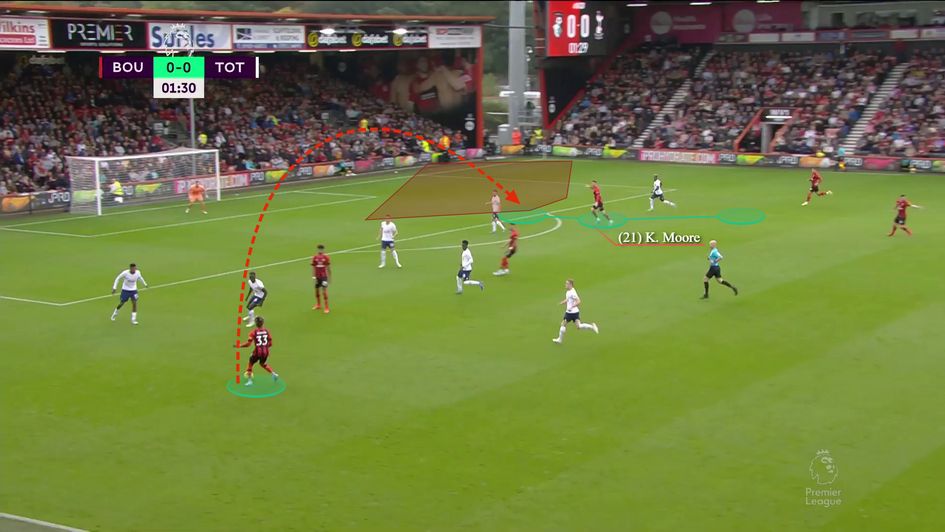 An intelligently-timed, smartly-directed run in behind to expose the blindside of his marker

Such a fine target for set-pieces too, this is another important aspect that should be a huge weapon at the World Cup and increase his scoring threat. Moreover, his role at defensive set-pieces could prove equally significant, as he's regularly on hand to quell danger due to his heading prowess.

"That’s something I always work on, I like to be commanding in both boxes and I think that’s a very pivotal role,” said Moore when quizzed on his role in dead-ball situations.

“As someone with my size and kind of, I’d say physique, I need to really assert myself. I need to be dominant and start really being a leader and a voice. Technically you need 11 leaders in that box and if each of you are pulling your weight and you are prepared to take a big hit to win the ball, at the end of the day that’s what you need to do.”

Proficient at dropping deep with his back to goal and holding the ball up too, the way he times his checks and adjusts his receiving posture to protect the ball, spins opponents or lays the ball off crisply has seen him effectively connect play and bring others into play.

Indeed, when doing so, it's been notable how slickly he opens up his body to execute sharp one and two touch passes, plus flicks and backheels, in order for the likes of Bale, Ramsey, Daniel James, Harry Wilson and Brennan Johnson to receive in ideal forward facing body shapes to immediately inject momentum into passages. 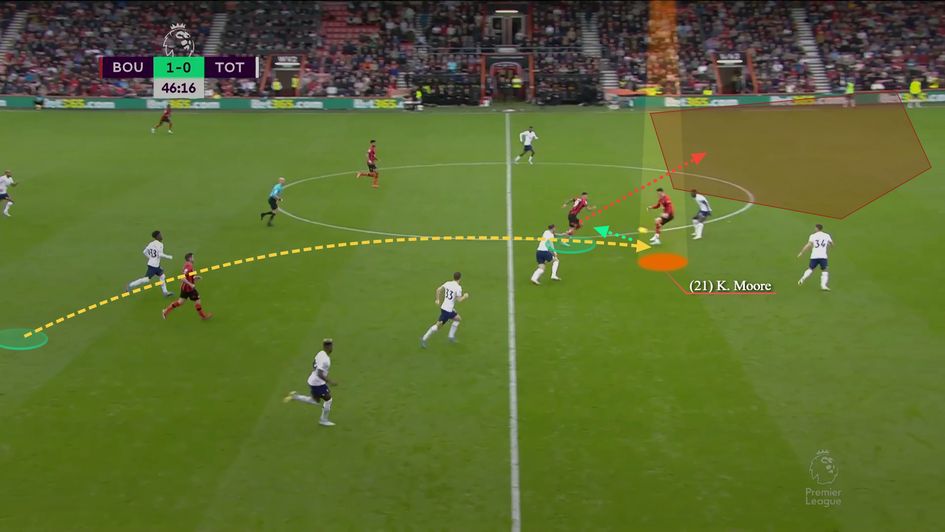 A neat lay-off to Dominic Solanke in an ideal, forward-facing position

It also warrants mention how, if there are no viable nearby options available that he patiently keeps possession and uses his nifty footwork to evade markers and cope with pressure to remain balanced and withstand challenges.

Useful both when breathing life into counters and in methodical build-up, how he provides a vital focal point and 'out ball' is another useful string to his bow.

Consequently, frustrated opponents will often foul him due to them being unable to dispossess the strong, languid striker, whose long legs and arms notably see him gain extra separation.

Boasting good pace and an underrated turn of speed, Moore's craftily directed runs in behind and down the channels accentuate his worth, for he's quick to recognise gaps between defenders, if stoppers are ball watching or are preoccupied. 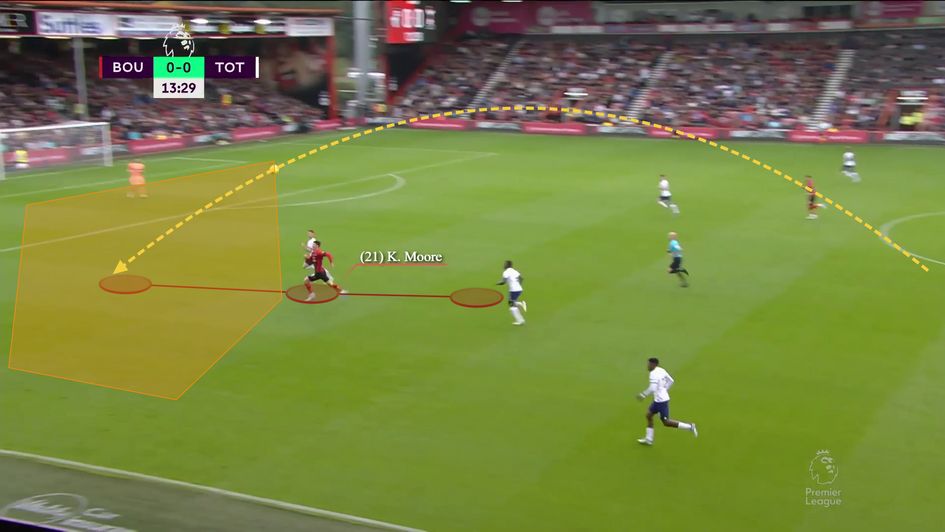 A nicely-timed run in behind the defence from Kieffer Moore

Another key aspect associated with his positional nous is how he expertly pins, draws and occupies defenders to manufacture space for team-mates both in front of and in behind defensive units.

An instinctive and competent finisher to boot, his ability to find the back of the net from a variety of situations and movements should hold him good stead to be a weapon in Qatar.

Aside from his masterful heading prowess, which means he can score trademark powered, glanced or placed headers, he's shown he can be a force in one-v-ones, plus when shooting from range, reacting rapidly to rebounds, opening up his body to find the corners or clinically firing home with first-time efforts. 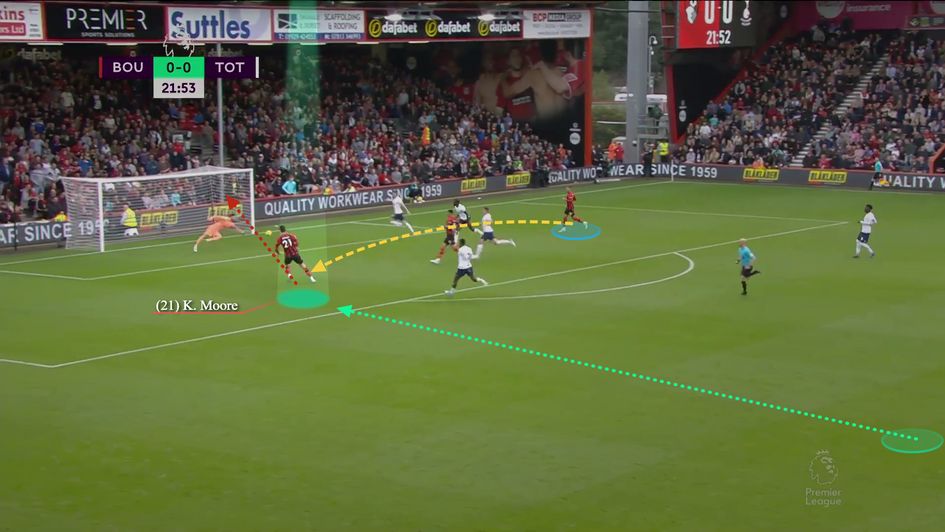 A classy one-touch finish after a clever run 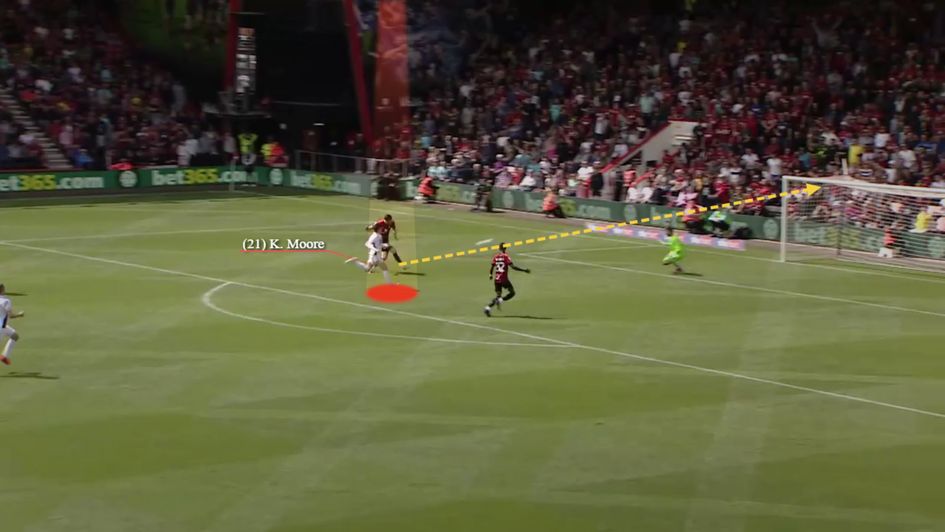 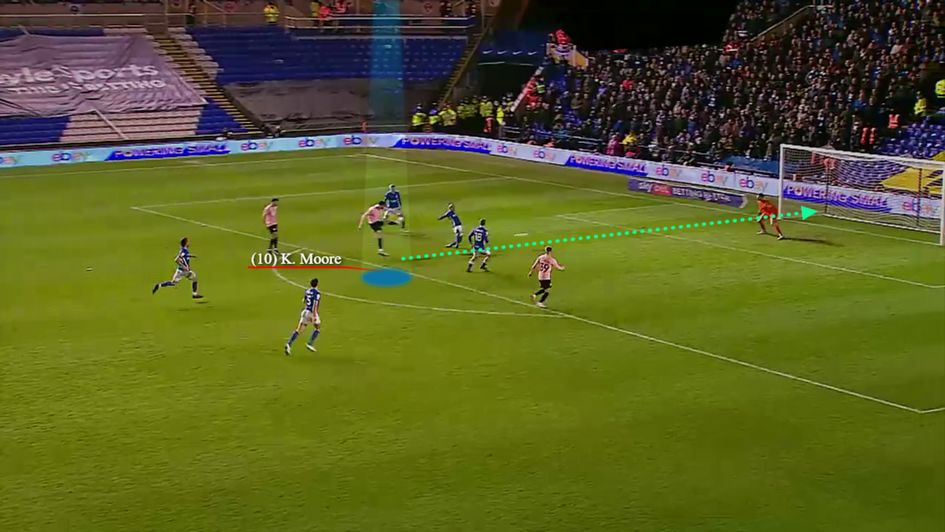 Kieffer Moore produces a searing finish into the bottom corner 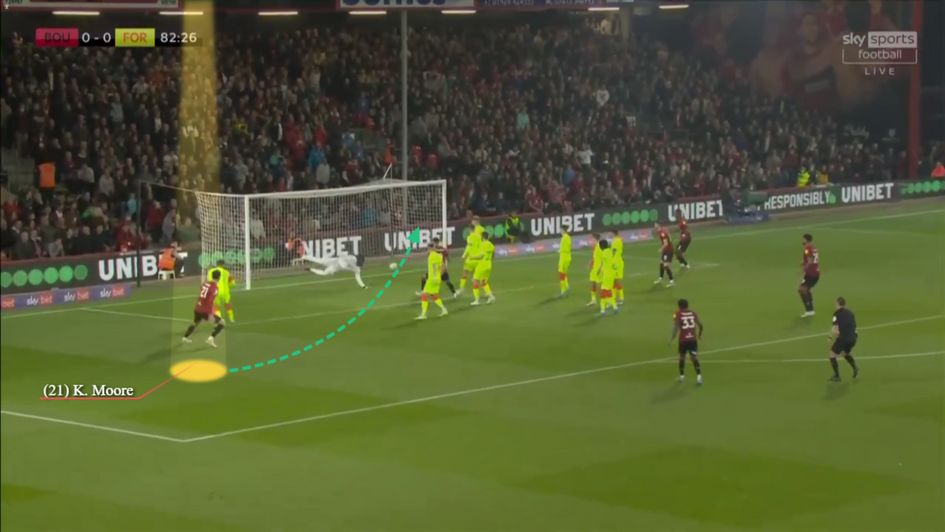 Whether coming off the bench or starting matches, there's a lot to like about what Moore brings to the table, as his skill set can be a real difference maker for Wales.

So beneficial in terms of placing doubt in the minds of defenders and unsettling backlines, opponents won't enjoy facing off with the hulking powerhouse.

Having enjoyed a remarkable rise that's seen him spend spells playing non-league football and plying his trade in Norway to eventually progress to playing in the Premier League and for Wales, where he even scored at Euro 2020, Moore's unquestionably done it the hard way.

Leading the line for Wales at a World Cup will just be the latest achievement in his circuitous path to the elite level, as he deserves all the success that comes his way for sticking at it even when it appeared unlikely he'd make it to the top of the sport.