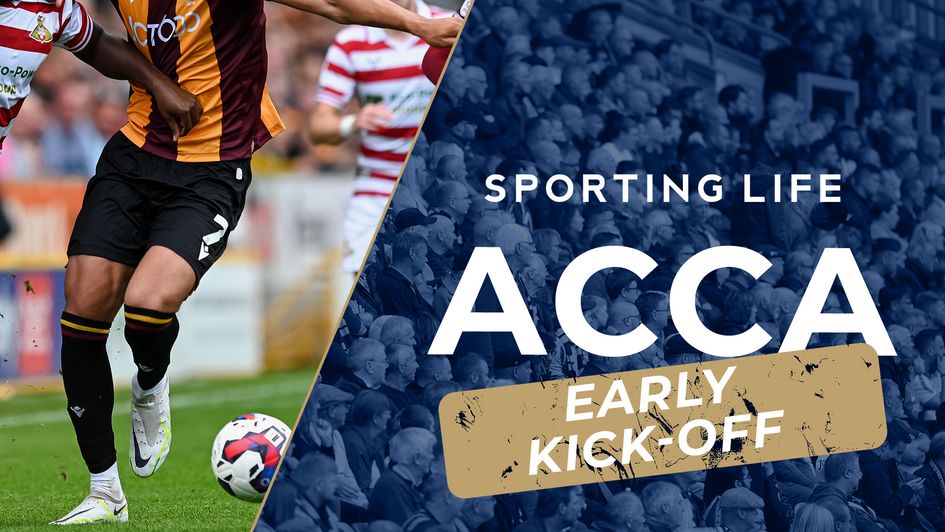 The Sporting Life acca features a selection of 1X2 and Both Teams To Score selections from across Saturday's EFL and National League programme, enhanced to 14/1 by Sky Bet.

BACK OUR ENHANCED 14/1 ACCA WITH SKY BET

Kick-off at 15:00 GMT on Saturday unless stated.

BURTON are a fun follow on the road, their Sky Bet League One away matches averaging a ridiculous 4.11 goals per game, with seven of the nine seeing both teams net. So back BOTH TEAMS TO SCORE when they visit fellow strugglers MK DONS, whose past six games have yielded 25 goals. They have no home clean sheets all season and Burton have just one away.

It’s been a rough few weeks for Sutton United, losing nine of their past 14 games and scoring just once in their last five, a run that includes an FA Cup exit to non-league Farnborough. Their away record of W1 D2 L6 is poor while hosts CARLISLE sit sixth in the Sky Bet League Two table and boast an impressive home xGF (Expected Goals For) figure of 1.67 per game.

Colchester have been horrific on their travels this season, W0 D1 L8, and hosts MANSFIELD can inflict another away League Two defeat on the struggling U’s. The Stags have dipped recently but are still eighth and a much better team than Colchester.

DAGENHAM & REDBRIDGE had won four on the spin before last weekend and were unlucky not to make it five, denied an FA Cup shock only by a late, undeserved leveller for League Two Gillingham. The Daggers should have no trouble sweeping aside National League bottom team Torquay who have lost six straight away games by an aggregate score of 18-0.

BACK OUR ENHANCED 14/1 ACCA WITH SKY BET