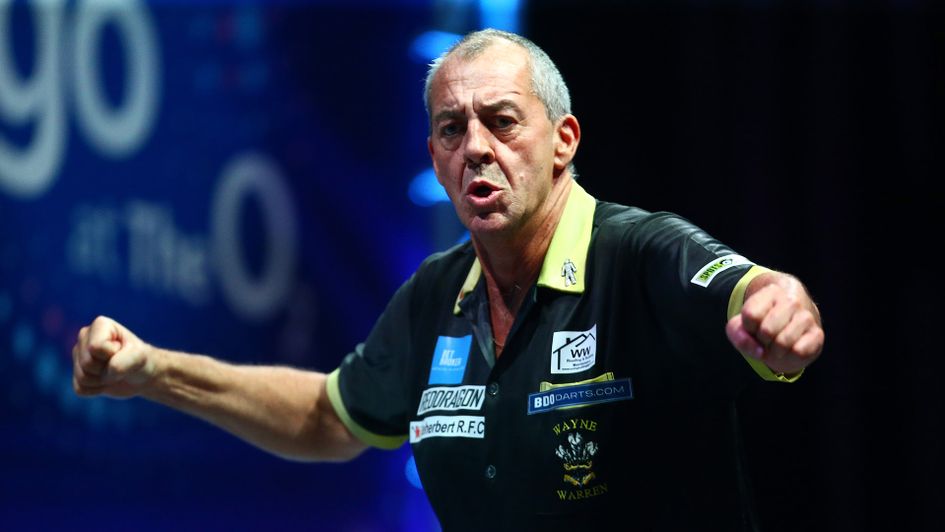 Wayne Warren will face Jim Williams in the first ever all-Welsh final of the BDO World Darts Championships on Sunday.

Williams began the tournament as the clear 3/1 favourite but his fellow countryman, who was tipped up by our darts expert Chris Hammer at 28/1 in his pre-tournament betting preview, is now just a marginal outsider at 11/10 having found the form of his life at the event's new surroundings of the Indigo.

Both will be appearing in their maiden BDO world finals, with Warren booking his spot first during Saturday's afternoon session thanks to an impressive 6-3 victory over Scott Mitchell.

The 57-year-old fired in a whopping 15 maximums during Friday night's impressive 5-3 win over Chris Landman and was almost as prolific against the 2015 champion, with a tally of 13 helping him record an average of 93.32.

🙌🎯 Wayne Warren is into the BDO World Darts Championship final for the first time!

🏴󠁧󠁢󠁷󠁬󠁳󠁿 The 57-year-old Welshman was tipped up at 28/1 each-way by our darts expert @ChrisHammer180 - but will he lift the trophy on Sunday?pic.twitter.com/MxNB5hbCdE

However, the Welshman looked in trouble early on, managing to win just one leg in the opening two sets as Mitchell blasted out of the blocks despite having little recovery time from his titanic 5-4 success over Scott Waites at close to midnight on Friday.

Scotty Dog was still showing no signs of mental fatigue in the next two sets, taking them both deciding legs only for Warren to pinch them both under real pressure.

Mitchell began to run out of steam in the seventh as Warren took full advantage to take it 3-0 although showed his fighting spirit in the next with back-to-back checkouts of 83 and 121 to force a deciding leg.

A huge error from Warren 😬

Followed by a big Bullseye from Mitchell to get him back in the set!

However, Warren kept his cool from 38 to move a set away from victory and kicked off the next with a superb 131 checkout.

Mitchell wasn't done yet with a 104 finish of his own as yet another set went the distance and although Warren began that with a sloppy visit of 24, he'd later dig out back-to-back visits of 140 and 141 to leave 56, which he took out to book his final spot.

Despite his years of experience, the 57-year-old only relatively recently became a major threat in the BDO.

In 2018 he reached the quarter-finals of the World Championship for the first time on just his third Lakeside appearance - 13 years after his debut - while he also reached the same stage of that season's World Masters and Zuiderduin Masters.

Warren followed that up with another impressively consistent season, which including winning the Antwerp Open and reaching the finals of the England Open and England National Championships, to climb up to five in the world.

"I think I gave him too much respect [at the start] and you shouldn't. I'm so happy to be in the world final at 57."

Williams, who suffered heartache in the last four to eventual three-time champion Glen Durrant 12 months ago, joined his fellow Welshman in the final with a hard-fought 6-4 victory over Mario Vandenbogaerde.

The pre-tournament favourite only managed to average 86.49 compared to his opponent's 90.98 but he held his nerve at the key times to get the job done.

🏴󠁧󠁢󠁷󠁬󠁳󠁿🎯 Jim Williams will face Wayne Warren in the first ever all-Welsh final of the BDO World Darts Championship! pic.twitter.com/F5b303VIGi

It looked like it was going to be a more routine night for Williams when he won the second set 3-1 after edging the first on a deciding leg, only for the Belgian to bounce back with a fine 140 checkout to take the third.

Vandenbogaerde levelled the match score when he punished Williams for missed doubles in the deciding leg of the fourth although the Quiff bounced back emphatically by whitewashing him - with help from 13 and 15 darts - for a 3-2 lead.

The outsider, who didn't manage a dart at a double in the fifth set, got himself back on level terms thanks to checkouts from 32, 66 and 64, but he'd only win one leg in the next two sets.

Williams upped his game during that period with a 14-darter and a 101 checkout to complete another in 15, although Vandenbogaerde refused to lie down by taking the ninth set 3-1.

The 35-year-old, who won his first major trophy at the BDO World Trophy last year, kicked off the 10th set with a 120 checkout before further finishes from 70 and 16 finally sealed his victory.

Barry, who recently lost in the opening round of the PDC World Championship to Vincent van der Voort having qualified via the Tom Kirby Memorial Irish Matchplay, underlined his potential with an average of 90.54.

The 17-year-old won the opening set 3-1 before taking the next two on deciding legs as he added the title to his Junior Darts Corporation world crown.

Bennett, who so memorably won this event 12 months ago with a 121 checkout on the bullseye, became the youngest player ever at 14 to feature in the men's draw earlier this week when he lost to Scott Mitchell.