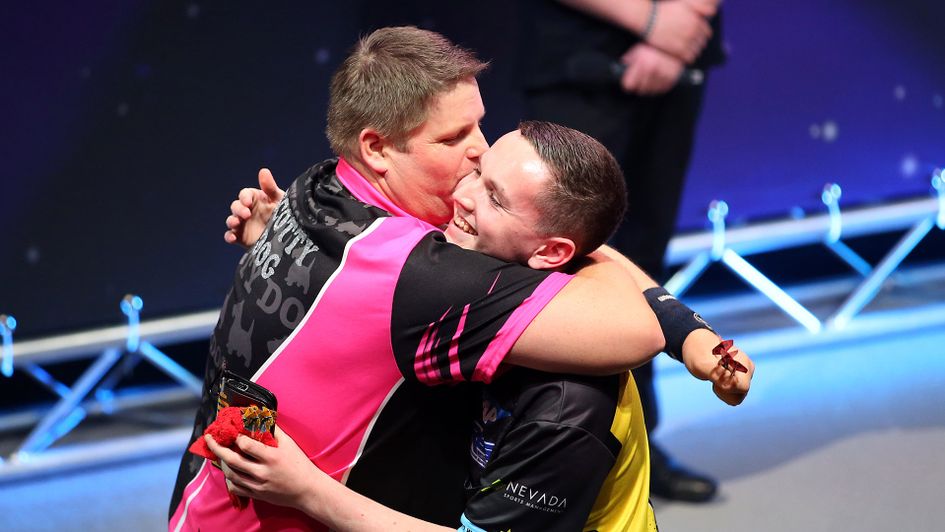 Leighton Bennett's dreams of becoming the first ever teenager to win the BDO World Darts Championship have been delayed for at least another 12 months after losing 3-1 to Scott Mitchell.

The 14-year-old prodigy, won sensationally won the youth title last year, became the youngest player to qualify for the senior draw after a quite incredible year which has seen him climb into the BDO world top 20.

Bennett also beat Phil Taylor in an exhibition event in Germany having also given him a run for his money inside the Tower of London before that, so it was no real surprise to see him priced up as the tournament's sixth favourite at 20/1.

However the vastly experienced Mitchell, who lifted this trophy back in 2015, was far more consistent throughout the contest and ran out a comfortable 3-1 winner.

The 49-year-old averaged 88 in both the first two sets and took them both 3-0 as Bennett struggled to show his true potential but he did take advantage of sloppy finishing from Scotty Dog to whitewash him in the third.

Mitchell got his act together again in the fourth to finish the job 3-1 although this certainly won't be the last we see of Bennett.

Impressive from a 14-year-old playing on a TV stage against a former World Champ!

The experienced Robson rattled through the first set 3-0 before taking the second on a deciding leg only for Mr Ben to edge the next 3-1.

Hazel came from 2-1 down in the fourth set to take the match all the way and completed his fine victory in style with checkouts of 95 and 91.

Scotland's Ryan Hogarth completed the third-round line-up with a 3-1 triumph over Thibault Tricole and he'll next meet the tournament favourite Jim Williams.

In the women's competition Lisa Ashton won every leg in a comprehensive 2-0 victory against Paula Jacklin.

The Lancashire Rose, who is bidding to reclaim the title for the fifth time after losing it to Mikuru Suzuki 12 months ago, averaged around 80 and hit a 110 checkout to complete the whitewash.

Richard Veenstra overcame stern opposition from Justin Hood to win 3-1 and reach the third round of the BDO World Darts Championship.

The speedy Dutchman, a regular in the latter stages of this competition without yet reaching the final, won the game thanks to his superior finish against an opponent who scored heavier.

Veenstra took out 127 and 145 in back-to-back legs in the middle of the match as he earned a victory whose margin didn't quite do justice to the contribution of Hood, whose textbook left-handed action kept him in almost every leg.

In the end, 26-year-old Hood made one too many mistakes when it mattered most as Veenstra edged through to a clash with David Evans, who also averaged less than his opponent in a 3-2 defeat of Nick Fullwell.

Nicky Kenny became the fourth men's seed to be beaten in the tournament as another Dutchman, Dennie Olde Kalter, edged their five-set thriller.

Olde Kalter hit double 18 for a 111 finish in a show-stopping climax, having secured a vital early break in the deciding set of a 3-2 success.

Kenny, who averaged slightly more than his opponent and edged the 180s count, has now lost at the second round stage in all three visits and, unlike when sent packing by subsequent world champion Glen Durrant, this one will sting.

The 26-year-old, seeded six, was expected to form part of a strong Welsh assault on the title but after fighting back from 2-0 down, his efforts went to waste.

Olde Kalter advances to face Mario Vandenbogaerde and said: "My first time in the World Championship, I had him under pressure all game, and that's why he did not perform as he should have."

And in the women's draw, Anastasia Dobromyslova beat Sharon Prins 2-0 in a match both players will wish to forget.

Dobromyslova averaged less than 65 for the very first time in what's her 11th World Championship appearance, but her Dutch opponent was a couple of points lower still.

The torture ended on a 44 checkout, the highest of the contest, as Dobromyslova kept alive her hopes of a fourth world title. Suffice to say she will need to improve, a point to which she quickly alluded.

"Do you know what, I think it was disgusting," the Russian said of her performance. "I shouldn't be even be playing (the) World Championships really. Shocking.

"I (will) just try to rip this page out of my diary," she added. "Seriously, it's just ridiculous."