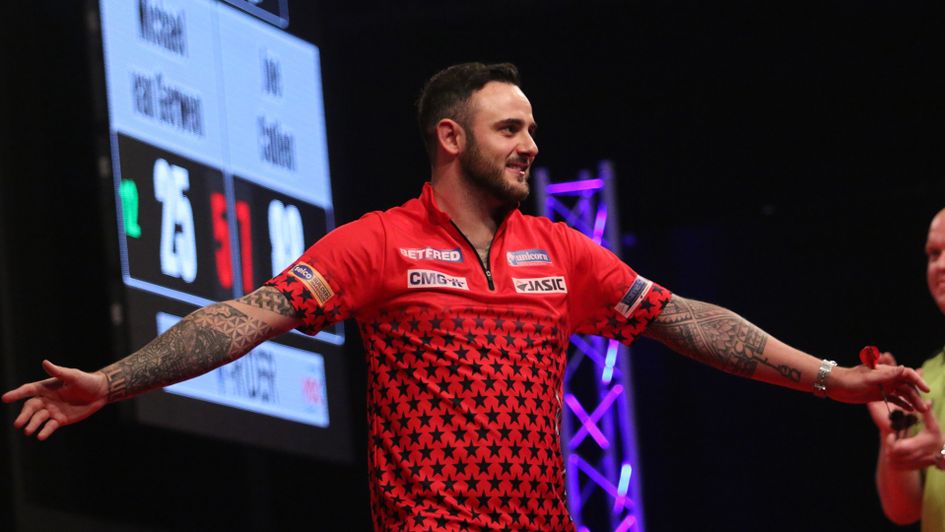 Joe Cullen finally took his career to the next level as he defeated Michael van Gerwen to clinch his maiden European Tour title in Germany.

The Rockstar has been widely tipped to challenge consistently at the top of the sport for several years given his rich potential and although he'd previously won a pair of PDC titles back in 2017, neither were on a stage environment.

But Cullen has now shaken that monkey off his back with a series of superb performances at the European Darts Matchplay in Mannheim this weekend, culminating in a shock victory over the in-form defending champion van Gerwen.

Playing in his maiden ranking final on a stage environment, the Bradford man brought the Maimarkthalle crowd to their feet with a 170 checkout in the seventh leg to move 5-2 up and again when clinching an 8-5 victory with a finish from 88 to complete a match-winning 14-darter.

Cullen averaged 101.3 in the final compared to MVG's 100.18 and crucially pinned eight of his 17 attempts at doubles as his opponent, who also lost last weekend's final to Mensur Suljovic in Austria, spurned 12 of his 17.

Get in there Joe Cullen!

Tonight he finally gets to celebrate in front of a crowd after beating MVG for the first time since 2014 for his maiden European Tour title!pic.twitter.com/mVyDNYS9XK

Cullen, who had also beaten Jamie Hughes, William O'Connor, Glen Durrant and James Wade earlier in the tournament, told www.pdc.tv: "To beat Michael in the final is amazing. It's the biggest moment in my career, it's great.

"Michael is the consummate professional, he's so gracious in defeat and victory. Me and Michael are good friends and he congratulated me wholeheartedly."

This £25,000 title success will give Cullen renewed belief he can shoot to stardom having twice got so close in 2018 when memorably pushing Gary Anderson to the wire in the World Matchplay quarter-finals before spurning a golden opportunity to reach the European Championship final.

It's also the perfect response to suffering a demoralising 10-0 televised defeat to Ian White at this summer's World Matchplay.

He added: "It was just one of those weekends. For us mere mortals, we're not Michael, the stage is where we all play really well or play really bad and Michael has set the standard. I've been threatening to win a tournament for a while and this weekend I believed I was going to win it. It genuinely believed it. I couldn't see that anyone could beat me today."

World champion van Gerwen had earlier avenged last weekend's final loss in Austria by seeing off Suljovic 6-4 in the third round, before edging out Krzysztof Ratajski 6-5 in the quarter-finals and then beating Dave Chisnall for the 11th time in a row with a 7-1 success that also stretched his unbeaten run over the St Helens man to 26 matches dating back to 2016 (including one draw).

The Dutchman, who has won four times on the European Tour in 2019 to complement his other six titles that include the Masters and Premier League, said: "If you lose any final you can only blame yourself. I missed a few chances but Joe played a phenomenal tournament.

"Normally he's very laconic but today he beat some phenomenal players, also myself in the final, and fair play to him. I have to take this on the chin and move forward."

Elsewhere on the final day, Wade survived a missed match dart against Wayne Jones in the third round before overcoming Jonny Clayton 6-4 in the quarter-finals while Chizzy had beaten Ricky Evans and Rob Cross during his run to the last four.

The standout match performance of the day came from Durrant, who averaged 110 in an outstanding 6-3 third round win over Daryl Gurney.