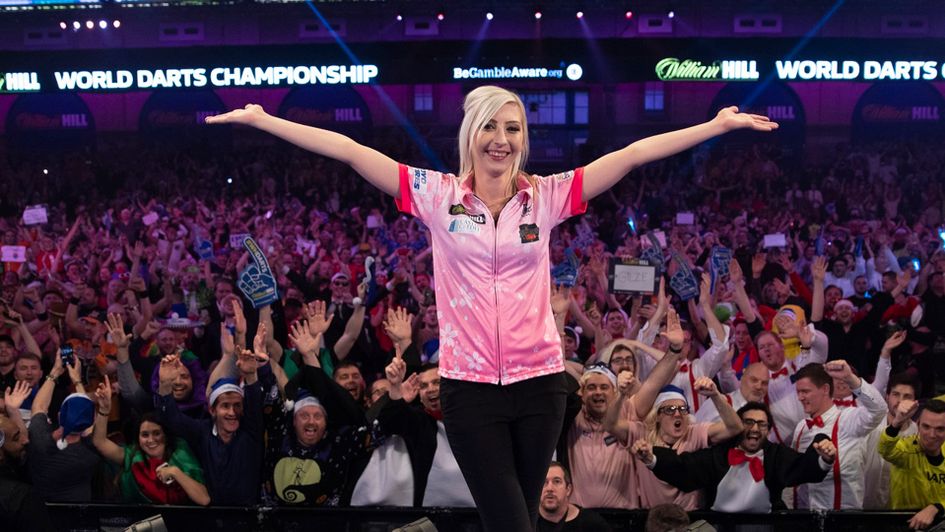 Fallon Sherrock: Queen of the Palace

Watch: Darts fans go crazy for Fallon Sherrock as the Queen of the Palace continues her reign

Our Chris Hammer reflects on another incredible night of celebrations at the Alexandra Palace as Fallon Sherrock stunned Mensur Suljovic at the William Hill World Darts Championship.

Imagine the scene. An arena packed with a partisan crowd of sports fans - predominantly male - creating a ‘bear pit’ atmosphere unanimously in favour of just one side.

Everyone is on their feet as the anticipation for a decisive moment in history reaches breaking point. Seconds later, an explosive roar erupts and pandaemonium kicks in. It’s a sea of ’limbs’, beer is being thrown everywhere and groups of mates leap uncontrollably together. Strangers are even embracing. The crescendo of noise is insane and the celebratory chaos is barely describable.

Three thousand fans lost in a joyous moment of sporting time. But this wasn’t football fans watching England winning a penalty shoot out at the World Cup on a big screen. It wasn’t cricket fans watching Ben Stokes at Headingley.

It was a young mum beating a man at darts. Again.

The incredible results and the performances to pull them off have been momentous, but the way her achievements have been celebrated are perhaps even more significant. And not just in the crazy confines of the Alexandra Palace, where she’ll be preparing for a third coronation on December 27.

Sherrock’s surreal week in the spotlight, in which she appeared on numerous TV shows and became a global social media phenomenon, will have brought in an even bigger audience for Saturday night’s clash with Mensur Suljovic, many of whom will perhaps be new to watching darts.

So not only is the 25-year-old sending out the most inspiring message to women the world over, you could also argue she’s done more for the global reach of darts with two victories then many leading men.

The official clip of her victory over Evetts has earned almost six million views on Twitter alone, blowing all other PDC darts videos out of the water while on top of that it was unsurprisingly their most retweeted and liked post ever.

Fallon Sherrock has become the first woman to win a match at the PDC World Championship.

Just look at these scenes, a history making moment for darts. pic.twitter.com/zqoOeyQLmt

By the time she’d managed to catch her breath in time to prepare for Suljovic, a united darting world were already firmly behind her crusade for increased opportunities and prize money for the ever growing band of talented female players and also break down barriers for the next generation to participate.

That was just extra pressure - if she’d even had time to think about it - on top of the daunting challenge of trying to do herself justice against a major winning world number 11 and proving her exploits four days earlier weren’t just a fluke.

Not that a crushing 3-0 defeat would have tarnished any memories whatsoever, but it’s still the last thing anyone wanted, especially with Gerwyn Price saying she’d beaten “a young boy” affected by the crowd rather than a man.

🙌🎯 Incredible drama at the Ally Pally, where Gerwyn Price brought the crowd to their feet with a thrilling five-set victory!

❄️ But how does the Iceman compare the atmosphere to this time 12 months ago when he was very much the villain...@Gezzyprice pic.twitter.com/qmrp5NZOE4

The Welshman knows full well how booing from the fans on this stage - and plenty others - can cause your game to crumble and that’s seemingly what happened to the Austrian, who is so usually a fan favourite.

He missed three darts to win the first set 3-0 as Sherrock hit checkouts of 81, 70 and a roof raising 131 in a scintillating display of finishing and he’d also blow another 2-0 lead in the third when visibly looking rattled.

What a finish from the Queen of the Palace as she lands a huge one to level at 2-2 in the opening set. #WHDarts pic.twitter.com/cKB0PKlcUN

The Milton Keynes thrower, who averaged over 90, hit four 180s and converted 11 of her 16 double attempts, came from 2-1 down in the fourth in another display of nerveless character before wrapping up her victory in style on the bullseye.

SHERROCK HAS DONE IT AGAIN!!!

She beats Mensur Suljovic 3-1 to repeat history and book her place in the Third Round.

So after beating the ‘boy’ 3-2 and the ‘man’ 3-1, next up for Sherrock is a player fittingly nicknamed Hollywood.

Chris Dobey, one of the rising stars of darts and widely tipped to go far, claimed earlier in the week that he wanted to play her - but not because he thought it’d be an easier match.

Interestingly, the popular Geordie is actually excited about prospect of finding out how to play with the crowd against him, and doesn’t even want the Queen of the Palace to quieten her royal subjects down.

...but find out why he doesn't want Fallon Sherrock to do the same should they meet in the third round!@Dobey10 @Fsherrock pic.twitter.com/SNwlhWdMyD

Sherrock, was 5000/1 to win the title before a dart was thrown, will need every one of them singing their hearts out again but whatever happens from now, the darting history books will all say this was her World Championship.

Everything else is a footnote.

👑 Queen Fallon Sherrock will take a break from her Ally Pally rule to spend time with her son this Christmas.

🤔 But is she tempted to take on more celebrities? pic.twitter.com/ofrKIsRpDL

Love this response from Fallon Sherrock...