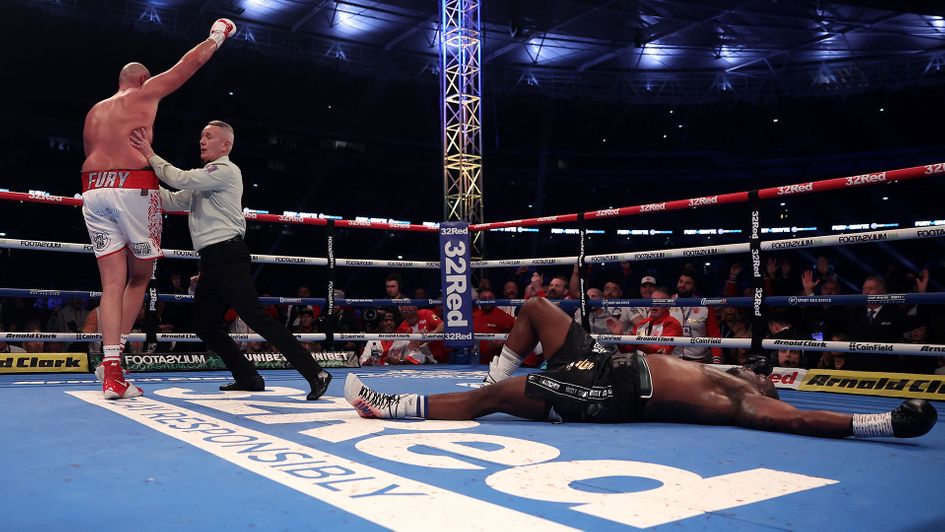 Tyson Fury sits atop boxing’s booming heavyweight division as the WBC, Ring magazine and lineal champion, still unbeaten with a professional record of 32-0-1 - and although he's announced his retirement following his victory over Dillian Whyte at Wembley, many expect to see him fight again.

But for the time being our friends at furyjoshua.com look back on the Gypsy King's remarkable career.

He knew it was done.@Tyson_Fury screamed for the ref to call it as Dillian Whyte struggled to his feet.#FuryWhyte pic.twitter.com/qyNodEcU5u

Our favourite Fury performances make the list for a variety of reasons - they aren’t all highlight-reel knockouts which drive millions of views on YouTube. In a nutshell they give a great overview of Fury’s career so far - both the brilliant boxing ability and the ability to overcome adversity.

Tyson Fury defeated Deontay Wilder in an epic Trilogy fight at the T-Mobile Arena in Las Vegas as he retained his WBC heavyweight world title in sensational fashion.

Twenty months on from the Gypsy King's devastating seventh-round stoppage over the Bronze Bomber at the MGM Grand, Fury maintained his unbeaten record and status as the lineal champion of the world that he earned from dethroning Wladimir Klitschko way back in 2016, but he had to survive two knockdowns in the fourth round of an unforgettable fight that will go down in history.

The 33-year-old initially had Wilder on the canvas in the third round and looked on course for another one-sided win only for his American opponent to earn widespread respect with a courageous comeback that put Fury in real trouble.

Although Fury was always on course to win on the scorecards, the longer Wilder stayed on his feet kept the outcome in doubt but eventually he put him down once more in the 10th and again in the 11th before the referee Russell Mora finally called a halt to the fight.

February 22, 2020 - the night Tyson Fury once again reached the top of the mountain to become world heavyweight champion and complete one of the greatest comebacks in the history of the sport. The style in which he did it makes this the greatest performance of Fury’s career to date.

Fury had boxed smartly in the first fight with Wilder but here - under the tutelage of Kronk Gym disciples Javan ‘SugarHill’ Steward and Andy Lee for the first time - he simply steamrollered the previously unbeaten ‘Bronze Bomber’ in sensational style.

The ‘Gypsy King’ was on the front foot right from the first bell, and by the time three minutes had passed Wilder already looked a very concerned fighter. But this was just the start.

Fury’s new-found aggression - allied to the brilliant ring smarts we always knew he had - left Wilder completely outgunned and he was down twice in the third round - both via Fury right hands.

It was only a matter of time before Fury applied the coup de grace with Wilder completely befuddled and out of gas. And the end duly arrived in the seventh when with their man on the ropes and eating more leather, the Wilder corner threw in the towel to end a sensational night for British boxing.

Fury became world heavyweight champion for the first time at the age of 27 with a brilliant performance to end the long reign of the great Wladimir Klitschko in his own adopted back yard.

If Klitschko was nonplussed by Fury’s pre-fight antics as ‘The Gypsy King’ appeared to get inside his head with some trademark theatrics (notably dressing as Batman for a press conference and then wrestling a man dressed as The Joker) it was nothing to the shock the Ukrainian superstar had when he got inside the ropes with the man from northern England.

Fury produced a superb technical display as he completely outboxed the champion, leaving Klitschko apparently unable to pull the trigger and land anything meaningful on his challenger.

Before the fight it would have been a brave man who forecast Fury being able to come away from Germany having won a decision against Klitschko, but such was the brilliance of his display that there were no complaints from anybody when scores were announced.

The future that night appeared bright for the new WBA, IBF, WBO and lineal heavyweight champion of the world, but underneath it all there were dark times already brewing. Fury would not fight again for almost three years - a period where not only his career but his very life would be thrown into doubt.

To really understand what Fury achieved in his first meeting with Deontay Wilder, you have to look at where he was and where he was coming from.

‘The Gypsy King’ was still getting back into proper fighting shape after ballooning to 400lbs and contemplating suicide during a near three-year hiatus from the ring. And two tune-up fights against Sefer Seferi and Francesco Pianeta were nothing like taking on the unbeaten and feared WBC heavyweight king Wilder (40-0 coming in with 39 knockouts).

Fury’s then trainer Ben Davison has since admitted that he didn’t know whether Fury would even be able to go 12 rounds in Staples Center, but he not only did so - he boxed brilliantly and survived everything Wilder could throw at him.

Before the action began the question appeared to be whether Fury, clearly the more skilful fighter from a technical perspective, could avoid Wilder’s fearsome bombs and use his ring smarts to claim a decision. He came very, very close to doing just that.

Wilder was winging at fresh air for most of the evening as Fury outboxed him completely - but ‘The Bronze Bomber’ would hit home twice, crucially, to put Tyson on his back.

The second knockdown - from a right hand followed by a brutal left hook early in the 12th and final round - led to that incredible moment when Fury, apparently out cold, rose from the dead in the style of wrestling’s The Undertaker to the astonishment of everybody inside the arena.

It says much for Fury’s dominance that even despite those knockdowns, most judges felt he had still won the fight comfortably. And when the scorecards were eventually announced they sparked controversy and a good deal of outrage.

For Fury though it was a massive step back toward his end goal. The comeback was well and truly on and he would look forward to the inevitable rematch more assured than ever..

Fury had claimed what was then the biggest victory of his career in 2011 by taking a unanimous decision over the ever-dangerous Chisora to win the British and Commonwealth titles.

But that impressive performance was surpassed by his display in the rematch, as he battered “War’ to defeat after 10 one-sided rounds in London.

Fury showed his boxing ability again in the early stages to take the sting out of Chisora, before really going to work on his outclassed opponent.

It was a virtuoso performance from Fury as he went about rearranging Chisora’s facial features. By round 10 it was all one-way traffic and ‘The Gypsy King’ simply could not miss with Chisora’s right eye virtually closed. It was no surprise then when his corner decided they had seen enough at the end of the session and pulled their man out to save him from further punishment.

The fight was a final eliminator for Wladimir Klitschko’s WBO world heavyweight title, and by winning in such style Fury had served notice to ‘Dr Steelhammer’ that ‘The Gypsy King’ would be no pushover when that world title challenge became a reality.

Fury’s Big Apple debut at the spiritual home of boxing almost ended in complete disaster as he was given an almighty early scare by two-time cruiserweight king Steve Cunningham.

‘The Gypsy King’ went into the bout with a huge size advantage, but Cunningham more than made up for that lack of physical stature with his speed and the accuracy of his shots. Fury was also without his trainer and uncle Peter Fury in his corner due to Visa issues.

Fury spent most of the first round with his hands down shouting: “Come on, that ain’t nothing” to Cunningham, but in the second he found something pretty special coming back at him as ‘USS’ planted him on his back with a devastating overhand right.

Fury beat the count and survived those deep waters to gradually take control of proceedings in what was a really good scrap between the talented big man and his much smaller, much quicker opponent.

Both men continued to land good shots but the end came in the seventh as Fury closed the show in style, first weakening Cunningham with a pair of brutal uppercuts and then sealing the deal with a devastating right.