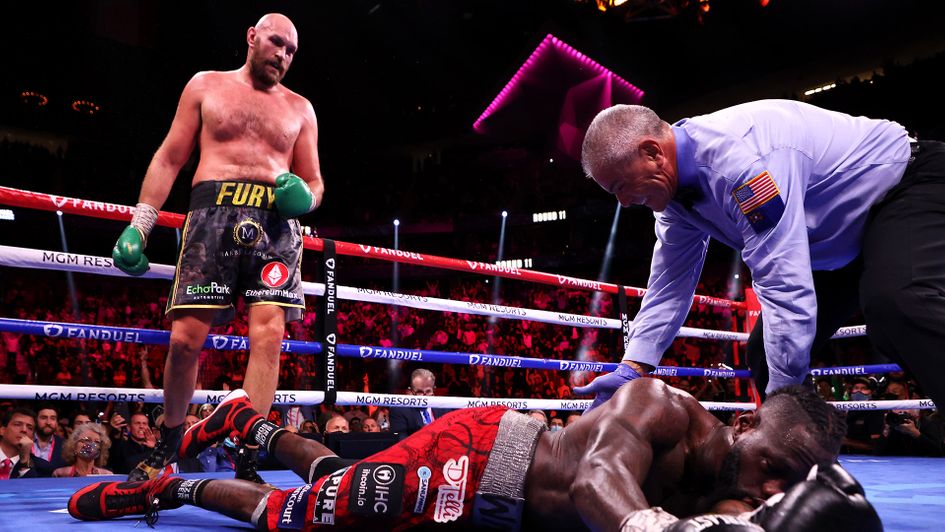 Tyson Fury defeated Deontay Wilder in an epic Trilogy fight at the T-Mobile Arena in Las Vegas as he retained his WBC heavyweight world title in sensational fashion.

Twenty months on from the Gypsy King's devastating seventh-round stoppage over the Bronze Bomber at the MGM Grand, Fury (31-0-1, 22 KOs) maintained his unbeaten record and status as the lineal champion of the world that he earned from dethroning Wladimir Klitschko way back in 2016, but he had to survive two knockdowns in the fourth round of an unforgettable fight that will go down in history.

The 33-year-old initially had Wilder on the canvas in the third round and looked on course for another one-sided win only for his American opponent to earn widespread respect with a courageous comeback that put Fury in real trouble.

Although Fury was always on course to win on the scorecards, the longer Wilder stayed on his feet kept the outcome in doubt but eventually he put him down once more in the 10th and again in the 11th before the referee Russell Mora finally called a halt to the fight.

Fury, who was unfortunate not to be awarded victory in their highly-controversial draw in Los Angeles in December 2018, also retains his Ring Magazine title as Wilder (42-2-1, 41 KOs) tasted his second career defeat.

Few gave the challenger any chance of reversing the result that saw him lose the title he'd won back in 2017 and successfully defended 10 times and the writing was on the wall in the third despite making a decent start.

Fury had never before been knocked down twice in a round but he, too, showed tremendous grit before taking a foothold in the contest around the halfway stage, with Wilder looking exhausted thereafter.

The Alabaman still remained a threat and had brief moments of success but he looked every inch the beaten man when Fury closed the show after one minute and 10 seconds of the penultimate round.

👑 The Gypsy King reigns in a thrilling Trilogy! 🥊

💪 Tyson Fury sent Deontay Wilder down in the 3rd

😲 Wilder knocks down Fury TWICE in the 4th

👊 Fury puts Wilder down again in the 10th and the 11th to finish the job!

Fury said in the ring afterwards: "I was hurt. Wilder is a big puncher and a big man. My lord and saviour rose me to my feet tonight. I give him the glory.

“It was a great fight tonight. It's one of the best trilogies in the history of the sport. Wilder gave me a real run for my money tonight and I've always said I'm the best in the world and he's the second best.

“I'm a sports man, I went over to show him some love and respect and he didn't want to give it back. So that's his problem. I'll pray for him so god will soften his heart.”

Asked what he said to Wilder in the ring, he replied: “I said 'well done, mate' and he said 'I don't want to show any sportsmanship or respect.” I said 'No problem.' I was very surprised. Sore loser. Idiot.

“To be a top fighting man you've got to show guts and respect and he couldn't do it.”

"I know you had your hearts in your mouth but don't ever doubt me when the chips are down!"

"I'll pray for Deontay Wilder."@Tyson_Fury has a message for his friends and family who might have got a bit stressed watching that epic fight! pic.twitter.com/DMoS9ps1RS

Deontay Wilder won a lot of respect for his performance but according to Tyson Fury, he's just tarnished that.

The Gypsy King said: "He said, I don't want to show any sportsmanship or respect...he's a sore loser, an idiot."#FuryWilder3 pic.twitter.com/rdppLrPZFn

Attention will soon turn towards who Fury will fight next and at the moment that looks to be Dillian Whyte, who will be the WBC mandatory challenger so long as he wins his fight with Otto Wallin on October 30.

Whyte has been closing in on a world title shot for several years but he will be a seizable underdog if he gets that chance against Fury, who will then have eyes on a unification fight with either Oleksandr Usyk or Anthony Joshua.

The fellow Brit has triggered a rematch clause with Usyk after losing his WBA, IBF and WBO crowns to the classy Ukrainian at Tottenham Hotspur Stadium last month.

The winner of that will become the first undisputed heavyweight champion since Lennox Lewis 21 years ago.

👑🥊 Who will Tyson Fury eventually fight to unify the heavyweight titles...and will he win?#TysonWilder3