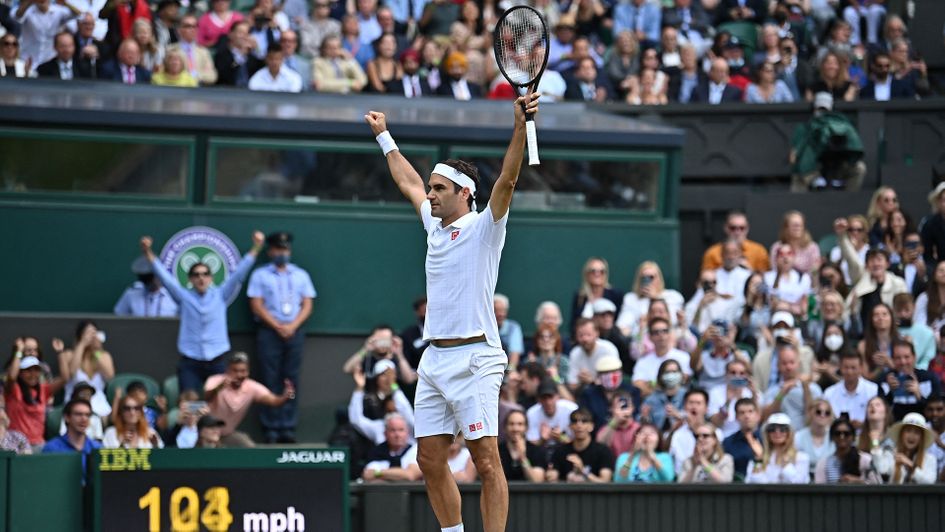 Wimbledon 2021: Roger Federer through after victory over Britain's Cameron Norrie

Cameron Norrie found his path at a grand slam blocked by a tennis giant once again as he fell in the third round of Wimbledon to Roger Federer.

The British number two was playing in the last 32 for the third consecutive slam but, after losing to Rafael Nadal at both the Australian and French Opens, this time it was Federer who defeated him 6-4 6-4 5-7 6-4.

Federer looked to be cruising through to the fourth round at two sets ahead only for Norrie to break to love to clinch the third. That was as good as it got, though, with the sixth seed wrapping up victory in two hours and 34 minutes.

Norrie follows Andy Murray and Dan Evans out of the tournament so, having had three men through to the third round of the singles at Wimbledon for the first time since 1999, British interest is now at an end.

There can be no disgrace, of course, in losing to the only man who has lifted the trophy eight times here and, barring a few loose moments, Federer looked as sharp as he has so far this tournament.

Norrie has been one of the stars of the ATP Tour this season, reaching three finals. The 25-year-old is a supreme athlete but lacks big weapons and often beats players by grinding them down, actively trying to make matches as physical as possible.

Federer, on the other hand, looks to race through matches as quickly as he can and his speed of play has a suffocating effect on opponents.

That was certainly the case for Norrie when he was broken in the seventh game of the first set, with the crowd split down the middle in terms of who to support.

Now EIGHTEEN times into the second week!@RogerFederer’s pursuit of title No.9 continues with a 6-4, 6-4, 5-7, 6-4 victory over Cameron Norrie#Wimbledon pic.twitter.com/eLaCK4bgKH

Norrie had two chances to break in the second game of the second set but they were gone in the blink of an eye, and Federer forged ahead moments later.

Tim Henman back in 2001 is the only British player to have beaten Federer in Wimbledon – Murray beat him on Centre Court in the Olympic final in 2012 – and there appeared very little chance of Norrie becoming the second until the end of the third set.

After missing a chance to break Norrie and lead 6-5, Federer wobbled, spraying a succession of errors and dropping serve to love.

Norrie whipped up the crowd as he sensed an opportunity, and he broke straight back when Federer moved 3-2 ahead, but another break for the Swiss at 4-4 proved decisive.

Federer, who is through to the fourth round at Wimbledon for the 18th time and will next take on Italy’s Lorenzo Sonego, said: “I’m super relieved. It was a tough battle with Cam. A little extra round but he deserved that third set.

“I thought he played excellent today and for me I felt I was really able to keep a very high level of play. He got the good break at the end of the third that cost me the set but overall I can be very happy with how I played.

“I guess this one’s special because I’m almost 40. At this point it’s all a bonus and we’ll see how far I can go here.”

Nick Kyrgios admitted he was “devastated” to bow out of Wimbledon prematurely after injury forced him to retire from his third-round match against Felix Auger-Aliassime.

The temperamental Australian, so often criticised for his on-court behaviour in recent years, has delighted the crowd this week with his tennis as well as his antics, while his mixed doubles pairing with Venus Williams lit up SW19 on Friday.

But Kyrgios, who had not played a single tournament since February before arriving in London last week, was forced to leave his own party early after suffering an abdominal injury while level at one set all against 16th seed Auger-Aliassime.

“I was devastated, obviously. I’m enjoying myself,” he said. “Going from the bad boy of tennis, all this stuff, to now one of the crowd favourites. I knew they wanted me to keep playing. I tried to give everything I absolutely could.

“I knew the more I served, the worse it was getting. It was heartbreaking for me. I told the crowd it was the end of the road. It was a journey.

“I honestly thought the way I was playing I could have done some pretty cool things this week. But it is what it is. It was tough to leave that crowd, honestly.”

Although he could not confirm it, the injury means it is almost certain his doubles pairing with Williams is over.

“I’m just disappointed. I don’t want to think about telling Venus just yet,” he added.

Alexander Zverev was made to battle through to the fourth round at Wimbledon by a man who had knee surgery just last month.

On June 3 Taylor Fritz left the French Open in a wheelchair after injuring his knee in his second-round match. Two days later he had an operation.

His remarkable comeback at SW19 saw the 23-year-old beat fellow Americans Brandon Nakashima and Steve Johnson, and take the first set against fourth seed Zverev, before the German ran out a 6-7 (3) 6-4 6-3 7-6 (4) winner.

“I mean, today was probably not the best match I played so far this tournament just feeling-wise, how comfortable I was. But I found a way to win. That’s the most important,” said Zverev.

“At the end of the day Taylor is a great player. I think everybody is surprised he’s playing this well, came back so early after the surgery that he had. I’ve got to give credit to him. He played a very good match.

“I thought his tactic was very clear. I thought he had a very clear game plan, and he was following that. At the end of the day he made it very difficult for me. But I’m happy to be in the fourth round.”