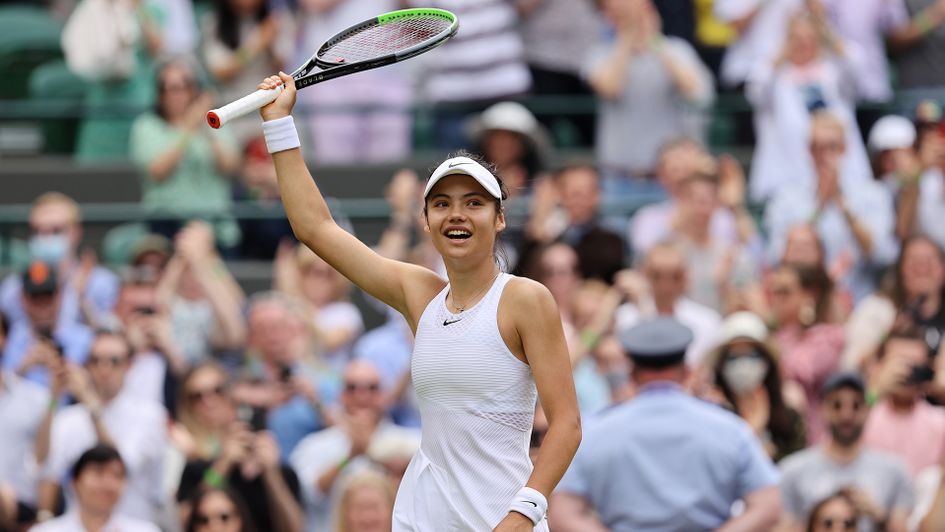 Emma Raducanu: The 18-year-old celebrates a history-making Wimbledon victory over Sorana Cirstea on Court One

Emma Raducanu’s Wimbledon fairytale continued with a history-making victory over world number 45 Sorana Cirstea on Court One that sent her into the last 16.

The 18-year-old has quickly become the story of the Championships, having only played one WTA Tour level match before this tournament, but she showed she belongs on the big stage with a 6-3 7-5 victory.

Raducanu, who is waiting for her A-Level results, passed this particular test in fine style, with a run of eight successive games laying the foundations of a memorable afternoon.

As well as a sparkling attacking display, where she hit 30 winners, she also showed fighting spirit and tenacity in the second set, claiming the win on her third match point.

She becomes the youngest British woman into the fourth round of SW19 in the open era and surely a Centre Court date with Ajla Tomljanovic on Monday awaits.

There is no way Raducanu would have thought her first week at Wimbledon would have ended by opening Court One on the middle Saturday.

But that was her reward for impressive wins over Vitalia Diatchenko and Marketa Vondrousova in the opening two rounds and she did not look out of place on the show court.

In a precursor for what was to come, she forced break points in the opening game of the match, which Cirstea saved, before holding to love in her first service game.

The Romanian is a top-50 player, beating Victoria Azarenka in the previous round, and flexed her muscles by claiming an early break to go 3-1 up after a smart backhand down the line.

If she thought she had broken the spirit of Raducanu, she was very wrong and the Brit proceeded to rattle off eight successive games which put her in a winning position.

She immediately broke back and then held to love to make it 3-3 and there was no looking back as she demolished Cirstea with an array of attacking winners, sealing the first set with a brilliant backhand defensive lob.

That carried over into the second set, quickly racing into a 3-0 lead, and at 0-40 on the Cirstea service game, the finish line was in sight.

But tennis is a funny sport when it comes to momentum and a mixture of some Raducanu errors and some big serves allowed Cirstea to wriggle out of her predicament and changed the complexion of the second set.

Cirstea then broke Raducunu and held again to draw level at 3-3, which is when the drama began.

Raducanu showed guts to come from 0-30 down to hold serve and to stop the rot before a tension-filled 14-minute game on Cirstea’s delivery.

Raducanu had her chances, with five break points and nine deuces, but she could not get over the line.

Cirstea’s serve had come under threat the whole afternoon, though, and it was the same again, with Raducunu this time clinching the match at the third time of asking when her opponent dumped a backhand into the net.

She said in her on-court interview: “Honestly, I am so speechless right now, at the end I didn’t know what my reaction would be if I won and that just happened, I am so so grateful for all the support I had today.

“Who would have thought, it is funny because at the start when I was packing to come into the bubble, my parents were like, ‘Aren’t you packing too many sets of match kit?’.

“I think I am going to have to do some laundry tonight, but I think they have a laundry service at the hotel, so I am all good.”

The moment @EmmaRaducanu became the youngest British woman to reach the fourth round at #Wimbledon in the Open era 👏 🇬🇧 pic.twitter.com/SUxODx6VIo

17-year-old @CocoGauff is at her brilliant best in beating Kaja Juvan on Centre Court - Angelique Kerber waits in the fourth round#Wimbledon pic.twitter.com/uNHk2kcqVX

American teenager Coco Gauff matched her feat of two years ago by reaching the fourth round at Wimbledon.

It is hard to fathom that Gauff is still the youngest player in either singles draw, two years after her sparkling debut when she beat Venus Williams on her way to the second week.

Back then Gauff was ranked 319 in the world. She is now 23 and on this evidence, still heading north.

She is bigger, faster and stronger than those heady days in 2019, but now has to handle the pressure of not being the young upstart but a genuine contender.

Having raced into a 4-0 lead, Gauff suffered a late-set wobble but hit through any nerves by serving it out with devastating power.

Juvan, who took a set off Serena Williams here two years ago, was warming to her task but Gauff saved break points in her first two service games, while crucially snaffling the one she was offered by the Slovenian.

A second break wrapped up the victory and set up a mouthwatering meeting with former champion Angelique Kerber on Monday.

“I think definitely coming in today I wasn’t as nervous as in my second round,” said Gauff.

“It’s a good feeling to be on this court and I’m super honoured the tournament lets me play on here. It’s not often a 17-year-old gets to play here.

“The goal is to be here in front of you guys next week, but I’ll just take every match as it comes and enjoy it.”

Note to challengers: If you're coming for @CocoGauff, you'll need to bring your A-game#Wimbledon pic.twitter.com/HuyPzMBIFz

Tomljanovic accused the former French Open champion of lying about an injury when she asked to see a physio as the Australian was about to serve at 4-0 up in the deciding set.

Ostapenko went for a medical timeout and won the next two games before Tomljanovic finished the job to seal a 4-6 6-4 6-2 win and set up a fourth-round meeting with British star Emma Raducanu.

The handshake at the end of the match was far from cordial as the fiery Latvian said she had “zero respect” for her opponent and later stated in her press conference that she would have won had she been able to play at just 50 per cent.

“I think it was very disrespectful what she did,” Ostapenko said.

“I mean, how can you say liar or something if you know zero about it, maybe I already had this injury before.

“Maybe it’s not new pain or something. How can you say this? You cannot say that. In front of everybody, call me liar? I don’t think it’s respectful from her side.

“I think my level today was, like, not good after the first set, because if I played at least 50 per cent I would have beaten her.”

Tomljanovic retorted: “She can say she was injured. I don’t think she was. There was nothing wrong with her the whole match, but then why on 4-0 she calls it?

“So I think that that’s a clear reason that she just wanted to get me off my game.

“Then to top it all off, for her to call me disrespectful at the end of the match is just, at that point, it’s laughable. I think it’s disgraceful behaviour from someone that is a slam champion, because kids look at her and, what, they see that?”