Three-time winner up to 1m2f for Phil Kirby but not in the same form since switching to this yard. Latest 15L defeat at Wolverhampton (1m6f) suggests plenty is needed of top weight.

Was on a long losing streak before winning two races on the bounce and proved they weren't flukes with short-head second at Wolverhampton (1m1f) in November. Up another 2lb but respected.

Failed to land a telling blow since making move to this yard. Couldn't land a blow over 2m here on latest start and is down another 3lb to career-low mark. Makes limited appeal.

Shown an aptitude for Wolverhampton with two wins there since September and ran a fine race when narrow fourth here over C&D last time out. Similar effort should see him go close.

Narrow winner of C&D handicap on penultimate start and progressed off 5lb higher mark when just denied over 1m2f here last time. Up another 2lb but no reason why she can't post another bold bid.

Registered career-best when third over C&D two starts ago but put in regressive performance when 14L 10th at Southwell (1m3f) last month. Not getting respite in the weights and looks vulnerable.

Inconsistent sort last season despite winning and regressed at the end of the season. Tailed off when tried over hurdles at Carlisle (2m1f) last time and looks best watched in this.

Hasn't won since September 2018 but struggling under both codes since. Modest 5L sixth over 2m here last time and may be seen to better effect over further.

Good C&D winner on penultimate start and was only beaten 3L when seventh over C&D when last seen. Absent since November 2018 so entitled to be in need of this effort.

Last win came at Redcar back in June but never a factor in his starts since, including over C&D last month. Is below his last winning mark however and may sneak a place at a price.

Long-standing maiden who offers little when in contention. Similar fate occurred when sixth of 12 at Southwell last month and is hard to put trust in. Wears first-time visor.

Had offered very little in her career to date before stepping up markedly when shock 100/1 winner of 2m handicap here on latest start. Had some rivals behind her that day but needs to prove that wasn't a fluke.

Maiden but progressing with racing in time, putting up best performances here the last twice, including when short-head second over C&D in December. Solid claims off a light-weight if replicating that.

A host of rivals from two previous races over C&D and 2m repose each other over this middle-distance trip and preference is for bottom-weight CALEVADE. The four-year-old took the eye when narrowly denied in a similar contest last time and has only gone up 1lb in the handicap for that effort, leaving him on a dangerously light mark. The standard is set by Greengage who is on a rapid upward curve and has another rise in the weights to contend with, while Sulafaat has also shown a strong liking for this track in her last two starts. Nearly There might be considered off a workable mark and has ran some solid efforts over C&D in the past.. 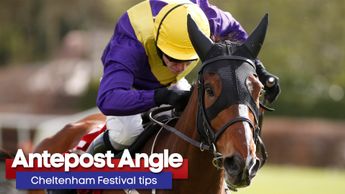 14h
All Racing Tips
Most Followed