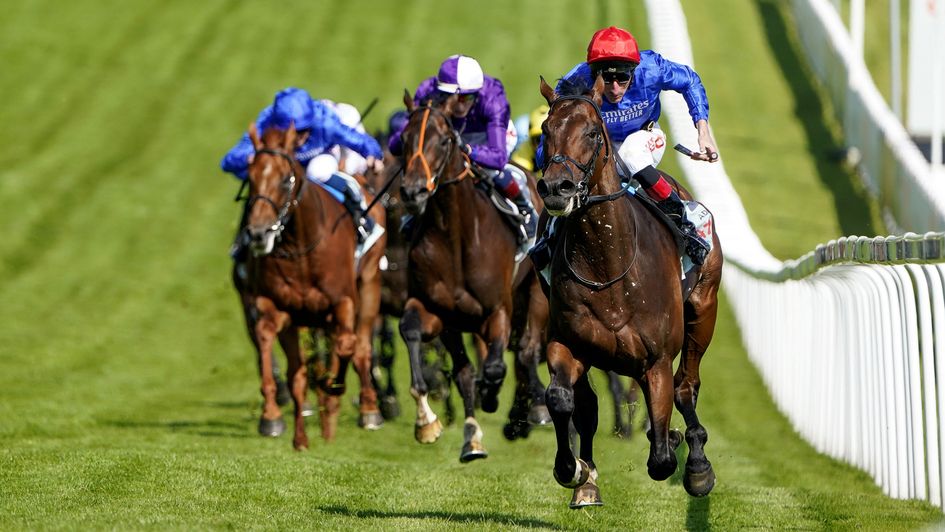 Derby winner Adayar can follow up in King George

Timeform preview the King George at Ascot on Saturday in which Adayar bids to become the first Derby winner to win the race for 20 years.

A look back at past winners of the King George VI & Queen Elizabeth QIPCO Stakes from the latter decades of the twentieth century reveals some famous Derby winners who went on to beat their elders at Ascot. They include the likes of Nijinsky and Mill Reef in the seventies, Shergar and Nashwan in the eighties, and Generous and Lammtarra in the nineties. But it’s now twenty years since Galileo became the most recent Derby winner to land the King George. Only two more three-year-old colts have joined him on the list of winners since 2001, the more recent being Nathaniel in 2011. The only Derby winner to try his luck in the last ten years was Anthony Van Dyck who beat only one home behind Enable in 2019.

The presence of the latest Derby winner Adayar in Saturday’s King George therefore adds plenty of interest to another small but select field for one of the highlights of the summer calendar. While Adayar has been resting on his laurels since Epsom, his stablemate Hurricane Lane has been busy advertising the Derby form on his behalf with two Group 1 wins of his own, firstly at the Curragh in the Irish Derby and then at Longchamp in the Grand Prix de Paris.

Runner-up in his two Derby trials at Sandown and Lingfield beforehand, Adayar was the longest-priced of Charlie Appleby’s three runners at Epsom but he showed plenty of improvement, staying on strongly to run out an impressive winner with Hurricane Lane beaten nearly eight lengths back in third. A repeat of that form, or some improvement on it, would make Adayar hard to beat, while any softening of the ground wouldn’t harm his chances either.

The King George was designed, and timed, to pitch the current classic crop against their elders and this year’s renewal – unlike some in recent years – has done a good job of bringing the generations together. Last year’s classic form is represented by Love who looks Adayar’s biggest threat if the ground remains on the firm side. Love built her reputation against her own sex last season, winning the 1000 Guineas, Oaks and Yorkshire Oaks on her only three appearances. Her nine-length win at Epsom was rather upstaged by stablemate Snowfall’s even more spectacular victory in this year’s Oaks, but Love bettered that effort with a high-class performance at York where she won by five lengths.

Whilst she didn’t need to show the same form in the Prince of Wales’s Stakes at Royal Ascot last month, that was a promising return with the rest of the season in mind. Love benefited from a well-judged ride from the front by Ryan Moore in a tactical contest, and when the Breeders’ Cup Filly & Mare Turf winner Audarya put in her challenge, Love showed a game response to keep her at bay.

Timeform described the ground at Royal Ascot as ‘firm’ for the Prince of Wales but, after the heavens opened, the going had turned soft by the time Wonderful Tonight won the Hardwicke Stakes there just three days later. Her trainer David Menuisier must be hoping for a similar deluge to boost her chances on Saturday. All five of Wonderful Tonight’s wins have come on either soft or heavy ground and when she won the Hardwicke she was carrying on where she left off at the end of last season when successful over the same course and distance in the Fillies & Mares Stakes on Champions Day.

Wonderful Tonight really impressed with the way she took control of the Hardwicke and the form of that race could hardly be working out better with placed horses Broome and Hukum, along with also-rans Japan and Sir Ron Priestley, all successful in pattern company since. Broome takes her on again after recording the first Group 1 win of his career in the Grand Prix de Saint-Cloud last time in which he made all the running. That was the reliable Broome’s fourth win of the year and it says plenty for the select nature of this field that he has more to find than most on form despite being a very smart performer in his own right.

Topping the Timeform weight-adjusted ratings is Mishriff who enjoyed a lucrative campaign in the Middle East early in the year, winning the Saudi Cup and, of more relevance to the test he faces here, the Dubai Sheema Classic back on turf on his first try at a mile and a half. However, going back up in trip he’ll need to settle better than he did last time when third of four to St Mark’s Basilica in the Eclipse at Sandown, another clash of the generations and one which fell to a three-year-old. But that was Mishriff’s first start for over three months and he’s entitled to improve for it.

The final member of the field is the other three-year-old Lone Eagle who missed Epsom but very nearly pinched the Irish Derby, Frankie Dettori sending him clear in the straight only to be run down near the finish by Hurricane Lane’s strong late charge.

Small fields often beg the question of where the pace will come from. That’s the case here too – but far from there being no obvious candidate to lead, all six runners tend to race prominently or make the running. That suggests stamina will be at a premium, in which case Adayar could well be an overdue addition to those famous names who have completed the Derby-King George double. His biggest threat is likely to come from one of the older fillies - Love if conditions remain quick, but Wonderful Tonight if the rain comes for her again.