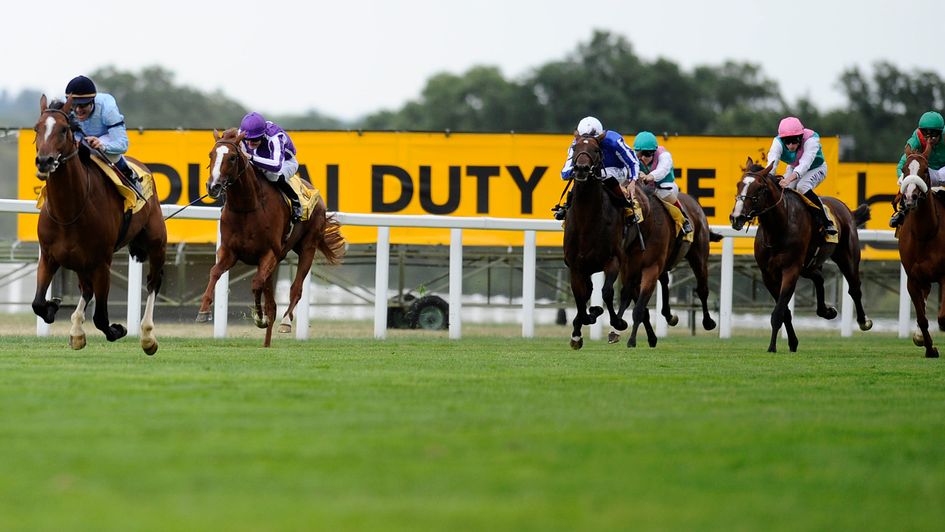 Harbinger wins by a record margin in 2010

The best winners of the King George VI & Queen Elizabeth Stakes at Ascot from the last five decades according to Timeform ratings.

The King George probably wasn’t the greatest performance of Mill Reef’s brilliant career but few other horses in the fifty years since he won at Ascot have come close to the rating he achieved that day. After finishing second to Brigadier Gerard in the 2000 Guineas, Mill Reef showed he had enough stamina to win the Derby and then put up an outstanding effort to beat the top-class French four-year-old Caro in the Eclipse. Back at a mile and a half, though, there were still some who believed he had barely stayed at Epsom and that he’d won the Derby simply because he was so much better than his rivals.

But, as at Epsom, Mill Reef was going like the winner some way from home at Ascot. Coming into the straight he was still on the bridle in third place and then moved smoothly into the lead two furlongs out. Clear of the field with a furlong to run, he drew further clear under Geoff Lewis in the closing stages and was still galloping strongly at the line, putting to bed any doubts about him staying the trip.

Six lengths back in second was the ex-Italian four-year-old Ortis who had been the most impressive winner during Royal Ascot when ploughing through heavy ground to win the Hardwicke Stakes by eight lengths. Beaten nine lengths in third was the high-class French three-year-old Acclimatization who finished just ahead of another French colt, Stintino, who had been third in Nijinsky’s Derby the year before.

Coming after his brilliant performance in the Eclipse, Mill Reef’s King George victory confirmed him the outstanding middle-distance horse in Europe, something he was to prove on French soil as well in the Prix de l’Arc de Triomphe later in the year.

Appropriately enough, it was a son of Mill Reef, Reference Point, who recorded the best performance in the King George during the 1980s. By the time he went to Ascot, Reference Point was established as a confirmed front runner under regular jockey Steve Cauthen. He’d gone close to breaking the track record when making all at Epsom but he hadn’t been able to hold off the much-improved four-year-old Mtoto in the Eclipse at Sandown when he became the first Derby winner since his own sire to contest the race.

For the first time in thirty years, the 1987 King George was run on soft ground. That ruled Mtoto out of the race but Reference Point still faced a top-class international field at Ascot. Among the other three-year-olds were Sir Harry Lewis, who had won the Irish Derby after finishing fourth to Reference Point at Epsom, and Unite, who had completed the Oaks double at Epsom and the Curragh. A formidable line-up of older horses included Coronation Cup winner Triptych (third in the Eclipse), Princess of Wales’s Stakes winner Celestial Storm and Grand Prix de Saint-Cloud winner Moon Madness, along with Tony Bin from Italy and Acatenango from Germany.

‘Reference Point annihilated them!’ was how Racehorses summed up his victory. ‘Stamina, courage and determination, all displayed in abundance, carried the day for Reference Point in the King George. It was an exhilarating exhibition of front-running, one of the sights of the European season.’

Cauthen sent Reference Point into a clear lead rounding the home turn by which point nearly all those behind him were struggling. Even Reference Point himself was all out at the finish but he came home three lengths clear of Celestial Storm who got up for second a neck ahead of Triptych. It was the best performance of Reference Point’s career; he later became just the third horse to add the St Leger to his Derby and King George victories.

Generous added his name to the King George greats by winning the race by seven lengths, a record margin at the time. That matched the distance he’d had to spare when winning the Derby and, having then followed up in the Irish Derby, Generous became the sixth colt, after Nijinsky, Grundy, The Minstrel, Troy and Shergar, to complete the Derby-Irish Derby-King George treble. Generous was rated an outstanding Derby winner, even by classic standards, while his subsequent three-length beating at the Curragh of Suave Dancer, who had himself been an impressive winner of the Prix du Jockey Club, established him as unquestionably the best three-year-old in Europe.

It begged the question of whether there was an older horse good enough to trouble Generous as he took on his elders for the first time at Ascot. In fact, the King George line-up looked a weak one overall, and it was another three-year-old, Saddlers’ Hall, who started second favourite to the odds-on Generous after running away with the King Edward VII Stakes at Royal Ascot by six lengths. The older horses were headed by the previous season’s Prix du Jockey Club winner Sanglamore, third in the Eclipse on his latest start, and Rock Hopper whose latest win had come in the Princess of Wales’s Stakes.

As his winning margin suggests, Generous was a spectacular winner of what proved a very strongly-run race. He took a decisive lead soon after the home turn and drew right away in the straight with Alan Munro easing him before the line. Mill Reef and Dahlia, both six-length winners, had previously held the record for the widest winning margins. His subsequent odds-on defeat in the Arc did nothing to alter Timeform’s view that Generous was ‘without question the best racehorse in Europe in 1991.’

Given how many twentieth-century Derby winners went on to win the King George – we’ve covered three of them above – it’s remarkable that, following Galileo’s death last week, there are now no living horses who have completed that particular double. Galileo was the most recent Derby winner to win the King George – like Generous and those five others he also won the Irish Derby in between – though if Aidan O’Brien (‘I was never convinced he was a mile-and-a-half horse because he has always shown so much speed’) had had his way, he’d have taken a different route after Epsom, one which took in the Eclipse and Queen Elizabeth II Stakes instead.

But a change of plan led to Galileo taking his chance as the 1/2 favourite at Ascot in what was billed as a ‘clash of the titans’ between himself and 7/2 shot Fantastic Light. The Godolphin five-year-old had been trounced by Montjeu in the King George twelve months earlier but had improved in the first half of 2001, putting up a top-class performance when winning the Prince of Wales’s Stakes at Royal Ascot in impressive fashion.

In a memorable race run on a sweltering afternoon in front of a record crowd, the finish duly concerned the first two in the betting. With both Galileo and Fantastic Light accompanied by pacemakers, it was stamina, rather than speed, which won it for Galileo at the end of a strongly-run race. Michael Kinane sent him into the lead early in the straight but the result briefly looked as if it could have gone either way when Frankie Dettori produced Fantastic Light approaching the final furlong. But as Fantastic Light faltered near the finish, Galileo responded splendidly to Kinane’s strong handling to pull two lengths clear at the line. In the first double-figure field for seven years, Galileo put up a top-class performance, though he had to work harder for it than many expected beforehand, and Fantastic Light narrowly avenged his defeat when the pair next met in the Irish Champion Stakes.

What to make of Harbinger’s record-breaking eleven-length victory in 2010? As the King George was his first and - it turned out - his only appearance in a Group 1, he couldn’t boast a career record to rival some of the other outstanding horses who have won the race. But, on the day, Harbinger put up the performance of a great King George winner. Ideally, he would have had the opportunity to confirm himself one of the best middle-distance performers in Timeform’s experience but little more than two weeks later he sustained a career-ending injury on the Newmarket gallops.

It came as little surprise that Sir Michael Stoute saddled the fifth of his now record six King George winners in 2010 but it was Derby winner Workforce who was sent off the odds-on favourite. Ryan Moore had ridden both colts in all their previous starts and opted for the three-year-old, leaving Olivier Peslier to take the ride on the improving Harbinger who was next in the betting.

Harbinger had shown smart form at three without showing any obvious signs of what was to come, but he returned at four with wins in the John Porter at Newbury, the Ormonde at Chester and the Hardwicke at Royal Ascot where he was the shortest-priced favourite of the week and put up a top-class effort.

While Workforce proved a major disappointment in the King George, Harbinger was a revelation and could be named the winner as early as the home turn. Peslier barely had to move a muscle as Harbinger cruised up to the leaders and strode clear of the Irish Derby winner Cape Blanco. The clock provided further evidence of Harbinger’s exceptional performance, with his timefigure the best in a British middle-distance contest since Generous in the same race. The form was franked, too, when Cape Blanco won the Irish Champion Stakes by five and a half lengths on his next start.