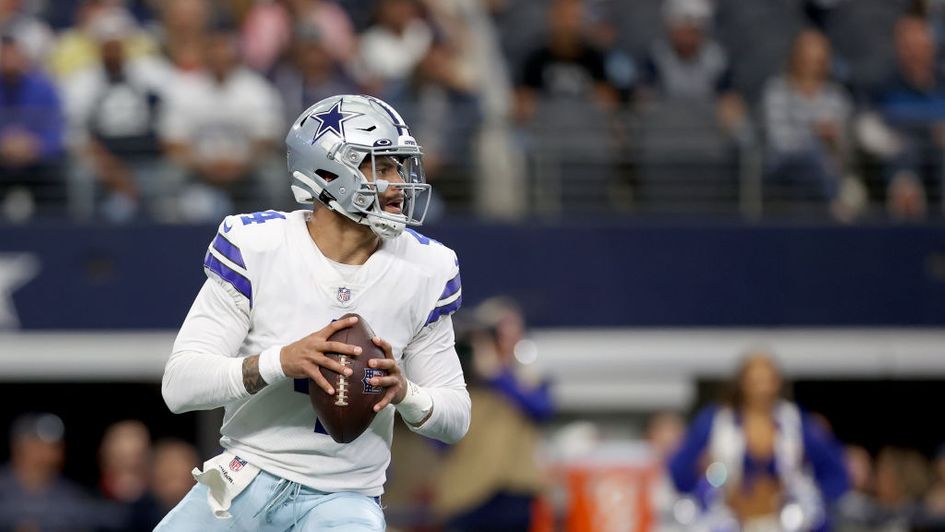 We are now officially into the second half of the 2021 NFL regular season, with Week 10 in the books.

Whether it is going against the spread or putting together exotic parlay picks, you now have plenty of evidence to sift through when making your predictions.

Chase Young (DE, Washington Football Team): Upsetting Super Bowl champions Tampa Bay should have made for a great Sunday for Washington, but the shine was well and truly taken off by a season-ending knee injury to 2020 Defensive Rookie Of The Year Chase Young. He suffered a torn ACL during the second quarter and his loss further weakens the front seven for a team which may still have lingering playoff aspirations after improving to 3-6 on Sunday.

Robert Woods (WR, Los Angeles Rams): If the Rams signing Odell Beckham Jr last Thursday appeared to be a luxury acquisition for a team already packed with stars, that notion was torpedoed just 24 hours later. The news that Woods had torn his ACL during Friday practice was a devastating blow for Sean McVay and his team. Woods (45 catches for 556 yards and four scores in 2021) formed an elite tandem with the unstoppable Cooper Kupp. The Rams followed up that grim news by enduring a second straight loss - 31-10 to San Francisco on Monday Night Football. Worrying times for McVay and company.

Aaron Jones (RB, Green Bay Packers): The news that Jones will miss one or two weeks with ‘a mild MCL sprain’ can be interpreted as the Packers dodging a bullet. The running back appeared distraught when he left Sunday’s shutout win over Seattle at Lambeau, and clearly feared something far worse. Good news for a team with Super Bowl aspirations in what is likely to be the final season in Green Bay for Aaron Rodgers.

Randy Gregory (DE, Dallas Cowboys): Gregory was another player to go down in practice last week and he is now on IR with a calf injury. That means he will miss at least another two games in addition to sitting out last Sunday’s 43-3 rout of Atlanta. Gregory had been terrific so far in 2021, emerging as a real star with 5 sacks and a team-leading 20 quarterback pressures. His absence is bad news for a Dallas pass rush already missing Demarcus Lawrence, and with Patrick Mahomes and the Chiefs lying in wait at Arrowhead this coming Sunday.

Cordarrelle Patterson (RB/WR, Atlanta Falcons): Patterson has found a new lease of life this season as a do-it-all star for the Falcons - a threat both in the ground game and through the air. But he is now set to miss the Thursday Night Football matchup with red-hot New England after spraining an ankle during that hammering in Dallas last Sunday.

Baker Mayfield (QB, Cleveland Browns): Mayfield has been hurting for most of the season thanks to a torn labrum in his non-throwing shoulder, and now he has more pain to contend with. The Browns signal caller suffered a knee contusion during last Sunday’s embarrassing 45-7 loss to New England in Foxboro. One thing we cannot question though is Mayfield’s toughness, and he is expected to suit up against Detroit on Sunday. The matchup with the Lions is crucial to Cleveland’s shaky playoff hopes, with that loss to the Pats dropping them to 5-5 and last place in the ultra-competitive AFC North.

Dallas Goedert (TE, Philadelphia Eagles): When the Eagles traded Zach Ertz to Arizona recently, it was a decision made partly to anoint Goedert THE option at tight end in the city of Brotherly Love. With that in mind, the concussion Goedert suffered Sunday against Denver is sub-optimal for a team which still has hopes of a wildcard berth in 2021. Goedert is now in concussion protocol and a doubt for a crucial game vs New Orleans this weekend.

Alec Ingold (FB, Las Vegas Raiders): Not the biggest name on this list, but a significant loss for the Raiders nonetheless as they were blitzed 41-14 by Kansas City on Sunday Night Football. Ingold, a key contributor on special teams in addition to his fullback duties, tore his ACL and is done for the season.

As we start to head for the business end of the 2021 regular season, thoughts for some teams start to turn to the 2022 Draft, to be held in Las Vegas next April 28-30.

Of course we’d never accuse NFL franchises of tanking, but some teams who are out of playoff contention will undoubtedly have one eye on what riches they might come away with next April.

If the Draft started today, this is how the top of Round 1 would look:

Headline points there have five of the top 10 picks going to the woeful (bar Dallas) NFC East. Philadelphia meanwhile has three picks in the top 15 right now - as well as two in the top 10 it is owed pick 15 from Indianapolis for the Carson Wentz trade if he plays 75 percent of snaps in 2021. He’s played 99 percent so far.

The Jets also have two picks in the top 10 at present, one of them courtesy of the blockbusting trade which sent safety Jamal Adams to the Pacific Northwest in 2020.

The Chiefs appear regularly in this slot and there’s a reason for that - they’re box office viewing.

Patrick Mahomes vs Dak Prescott in a nationally-televised game between two of the league’s highest-powered offenses has popcorn written all over it. The Over/Under for this one could be about 65 and we’d still consider buying the points…

The Chiefs appear to be back on song offensively after destroying Las Vegas in Week 10, and Dallas looked similarly good in spanking Atlanta with a dominant performance on both sides of the ball.

Two terrific offenses, two defenses with question marks, this should be a pointsfest - enjoy...