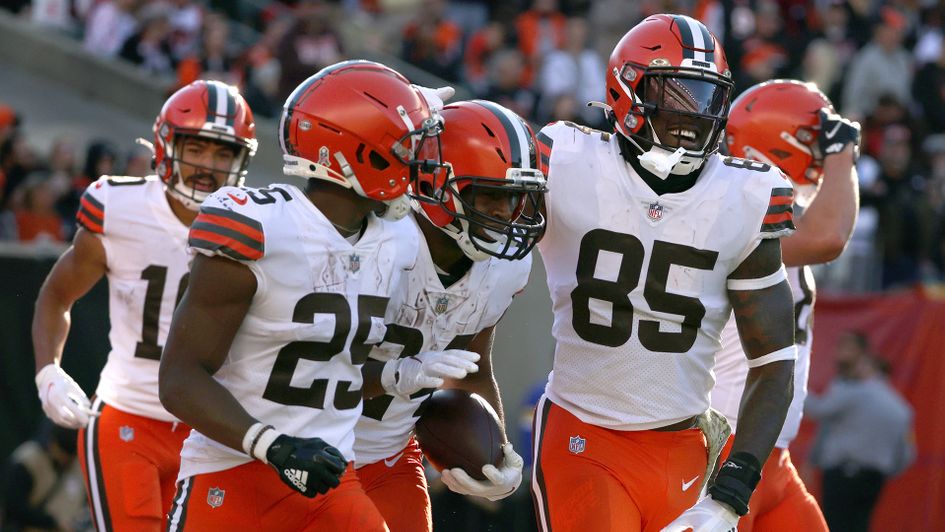 The Cleveland Browns recorded a convincing victory over the Cincinnati Bengals as they began life without Odell Beckham Jr.

Two days on from announcing they were to grant Beckham’s release, the Browns produced their most impressive performance of the NFL season so far to blitz the Bengals 41-16.

Nick Chubb registered two touchdowns, including a 70-yard scoring sprint, and there was also one from Donovan Peoples-Jones as he caught a 60-yard delivery from Baker Mayfield.

There was some quirky history made as the Jacksonville Jaguars recorded a surprise 9-6 victory over the Buffalo Bills, a match in which two players called Josh Allen went head to head.

The Jaguars linebacker sacked and intercepted the Bills quarterback and recovered his fumble – all three plays were firsts for two players sharing a first and last name.

The Baltimore Ravens moved to 6-2 after a 34-31 overtime victory against the Minnesota Vikings, with Justin Tucker coming up with the game winner.

The Miami Dolphins ended a seven match losing streak as they beat the Houston Texans 17-9.

A touchdown in the final seconds was all the Los Angeles Rams were able to salvage against the in-form Tennessee Titans as they suffered their second defeat of the season 28-16.

Points were a luxury for both teams as the Kansas City Chiefs ground out a 13-7 win over the Green Bay Packers, who struggled mightily without Aaron Rodgers.

Justin Herbert was at his electric best for the Los Angeles Chargers, throwing for 356 yards and two touchdowns in a narrow 27-24 victory over the Philadelphia Eagles.

Colt McCoy stepped up in the absence of Kyler Murray, leading the Arizona Cardinals over the San Francisco 49ers 31-16.

Elsewhere, the Atlanta Falcons won 27-25 against the New Orleans Saints, the New England Patriots beat the Carolina Panthers 24-6, the Denver Broncos triumphed 30-16 against the Dallas Cowboys and the New York Giants were 23-16 victors over the Las Vegas Raiders.