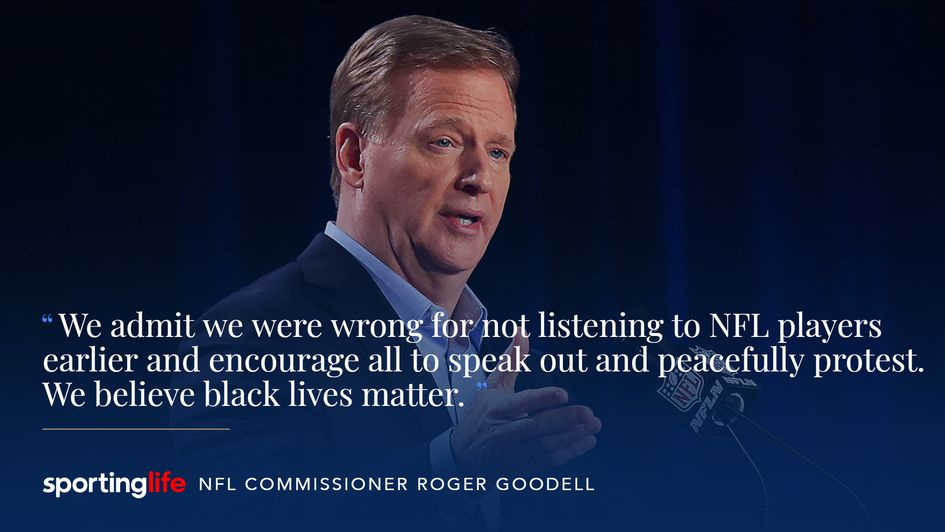 NFL commissioner Roger Goodell has admitted the league was wrong not to listen to players earlier and encouraged them to speak out and protest against racism.

Goodell’s posted a video to respond to a plea by several top NFL stars for the league to come out and denouce racism as the USA continues to be gripped by widespread protests over police brutality following the death of George Floyd in Minnesota last week.

Kaepernick suffered for his protests, as after leaving San Francisco he's never been given another chance in the NFL despite obviously having the talent.

Now, though Goodell has finally stepped up and backed the Black Lives Matter campaign, admitting he and the league was wrong not to listen, and that players should be allowed to protest if they see fit.

"We were wrong for not listening to NFL players earlier and encourage all to speak out and peacefully protest."#NFL pic.twitter.com/O6vd6jEz8a

“It has been a difficult time for our country, in particular black people in our country,” he said on a video posted on Twitter.

“We, the National Football League, condemn racism and the systematic oppression of black people.

“We, the National Football League, admit we were wrong for not listening to NFL players earlier and encourage all to speak out and peacefully protest.

Players, we hear you. #StrongerTogether pic.twitter.com/UJvS7AP0an

“Without black players there would be no National Football League and the protests around the country are emblematic of the centuries of silence, inequality and oppression of black players, coaches, fans and staff.

“We are listening, I am listening, and I will be reaching out to players who have raised their voices and others on how we can improve and go forward for a better and more united NFL family.”