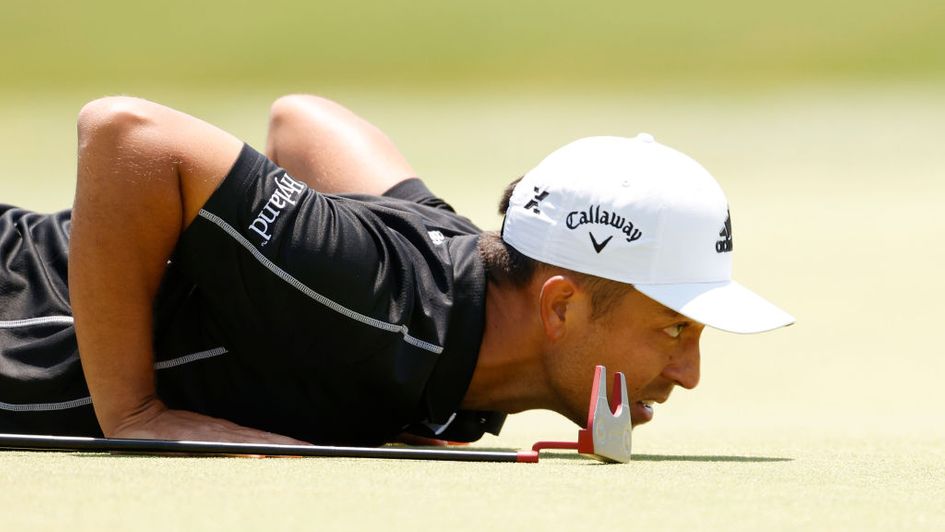 Xander Schauffele can boss his three-ball this evening

Ben Coley has a pair of three-ball fancies as he assesses the state of play at the US Open, where Jon Rahm remains favourite.

It was a fairly grim start to the US Open for my selections, which has been a frustrating theme so far this year. Viktor Hovland was scrappy and putted poorly for a round of 74, it took Tony Finau until the 18th hole to register a birdie and match that score at a course he loves, and Will Zalatoris played his entire first round without one on his way to a 75.

The only positives were a late rally from Bryson DeChambeau to just about keep his head above water at two-over, and a predictably solid, level-par opener from Paul Casey. Both of them return to play their second rounds on Friday morning and might yet make their moves, though it should be said the afternoon wave are scoring a fraction better with several still to complete round one.

As those in the mix would tell you, there is a long way to go — but already it would be a little surprising if the winner isn't one of the top eight in the revised market. Among the octet there are three at single-figure prices: Jon Rahm has halved in price to 11/2, Brooks Koepka is in to 7/1 from 18/1 having also carded a two-under 69, and Louis Oosthuizen, who shares the lead and has two holes to finish, is in to 8/1 from around five-times that.

Speaking of Oosthuizen, I'm mildly surprised that you can take evens about him leading after round one. This is effectively even-money about him two-putting from 35 feet at the eighth, and then making birdie on the par-five ninth. Admittedly, that hole averaged a shade over-par on Thursday, and he'll have to play it at 7am assuming no further fog delays, but there's some appeal in backing him knowing a par-par finish would likely mean money back.

As for the outright market, it's interesting that Xander Schauffele is still on offer at double-figure prices whereas Koepka is three points shorter. Granted, this to some extent reflects the unknowns surrounding Koepka before the tournament, and he's been re-factored having answered some of them. But if Schauffele deserved to be alongside him on Wednesday, he probably still does on Friday.

Pushed for a bet, it would be Schauffele each-way. To my eye he looked a few points shorter than he ought to be before the tournament, but having managed to shoot 69 with a cool putter, and with his flawless US Open record in mind, there are plenty worse options following the first round. Not that there is any real inclination to add a sixth outright selection just yet.

SCHAUFFELE is though the best three-ball option on the coupon, especially if you can get some of the 6/5 offered by Sky Bet at the time of writing, with 5/6 and bigger considered decent value (2136 BST).

He was six shots too good for Phil Mickelson, seven ahead of Max Homa, and with obvious scope to improve. Schauffele said afterwards that his putting felt good, for all he didn't really make his share, and the 64 holes of practice he put in last week have seemingly paid off as he bids for a breakthrough major so close to home.

Typically, backing first-round winners to follow up isn't necessarily the best policy, as you'll have lost a chunk off the price. Gary Woodland, who is 7/5 from 17/10 to beat Webb Simpson and Martin Kaymer, is one such example, though it's easy enough to argue he should be shorter still.

As for Schauffele, it's obvious to me that he's an odds-on chance being offered up at odds-against and I see little reason to expect better from Homa, whose major record is poor, or Mickelson, who was ragged and will perhaps be deflated at seeing another US Open chance disappear so quickly.

The latter was out of sorts in the opening round, particularly with his long-game, and Torrey Pines isn't a great course for him. It ought to be for Scheffler, who will have been delighted to shoot 72 given how ragged he was. It was though a round built solely on putting: he ranked third in the field, gaining four strokes.

Zalatoris hit the ball far better than both of them, gaining a couple of shots on Scheffler and more on Spieth with his ball-striking. That he failed to make a single birdie was down to his troublesome short-game and while we can't be certain of improvement, given it's his weakness, another 18 holes of strong tee-to-green play and he might be the best of this trio, which at triple-your-stake is a chance worth taking.

Other options include taking evens about Sungjae Im in the top South Korean market, though I'm wary of opposing Si Woo Kim. They should have it between them and it's just a little surprising to see Im priced as a marginal outsider with Paddy Power, given that he'll return to a four-foot birdie putt and then the par-five ninth.

Should the pair finish level after the opening round, which is the likeliest outcome, then you'd think Im should be favourite given their world rankings and the fact he was slightly shorter in the outright market. That said, Kim has a superior record in California and is exactly the type to stick around all week if his long-game remains sharp.

Jhonattan Vegas is worth considering both to win his three-ball and to overcome what's a six-shot deficit and be the top South American, a market which is offered only by Paddy Power and Betfair as I type.

Vegas was abysmal on and around the greens in round one, having hit the ball to an extremely high standard. This is nothing new, but he's got a good Torrey Pines record, arrived here in good form, and it wouldn't surprise me were he to climb the leaderboard following a frustrating 75 to open up.

He'll need to if he's to be the best of the South Americans, but Sebastian Munoz strikes me as vulnerable at 1/2. A habitual fast starter, he's two-under with four to play and hasn't yet made a bogey, but he'll do well to two-putt from 60 feet when he does return, and then faces the difficult seventh hole. Don't be surprised if his grip on this market has loosened slightly, even if he may well win it by default.

Finally, Jordan Smith is tempting at upwards of 2/1 to beat Hayden Buckley and Taylor Montgomery. Smith is an in-form European Tour player with a real touch of class, whereas both playing partners, who outscored him in the first round, are currently on the Korn Ferry Tour and are yet to achieve what he has in the sport.

Smith was favourite for this group on Thursday, but lost by eight to Buckley, who was excellent through the bag and talked up his chances afterwards. Perhaps he'll stick around, but a chastening Friday seems far more likely and now that he's the outsider of three in a place, it's Smith who rates the value.