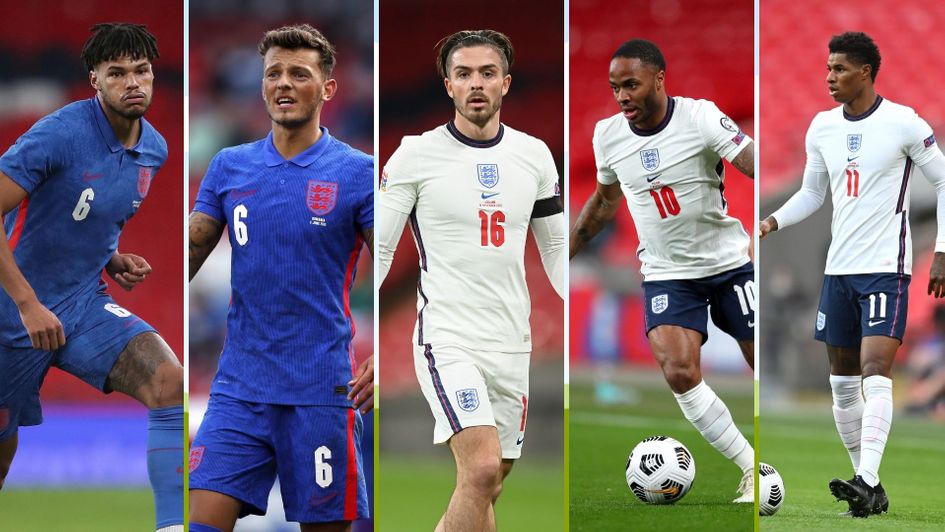 Who will start for England in their first Euro 2020 fixture against Croatia?

With the hours ticking down until England face Croatia on Sunday, we take a look at who the bookmakers think will get a starting berth in the Three Lions' group opener.

Have England ever entered a tournament with quite the uncertainty over both their preferred formation and starting XI that currently surrounds the Three Lions ahead of their Euro 2020 Group D opener?

Injuries and loss of form have meant some players that would have been considered surefire picks a few months are no longer guaranteed to start, while the plethora of attacking options at Gareth Southgate's disposal adds to the unpredictability.

Sky Bet have compiled a market of almost 200 different starting XIs to pick from, ranging from 12/1 to 1,000/1, which has given us more of a headache than the one Southgate is currently experiencing.

But those line-ups, and the individual odds on each of the squad's players to be selected, can give us a decent idea of who will be lining up to belt out the national anthem come 13:55 BST at Wembley this Sunday.

Jordan Pickford looks a dead cert to take the number one spot, with third choice keeper Sam Johnstone a real outsider at 33/1. Pickford played all of England's first warm-up friendly against Austria, keeping a clean sheet in the 1-0 win.

Dean Henderson looked like a value play at a big price given his regular game time at Manchester United, but Pickford has the trust of Southgate and has never let England down.

Johnstone, meanwhile, was very impressive in the 1-0 pre-tournament win over Romania, making a couple of cracking saves, and he could very much be one for the future. But let's face it, Pickford starts. Next.

Chiefly, there are two real bones of contention when it comes to England's XI against the Croats - namely, who starts alongside John Stones in the centre of defence and who starts behind Harry Kane further upfield?

The waters of the defensive conundrum are further muddied by the uncertainty over which formation Southgate will employ - if he goes 3-4-3, there's every chance Kyle Walker becomes an auxiliary centre-half, as he did in the 2018 World Cup.

Stones is, the bookmakers believe, an absolute banker to start at 1/50 despite, like all of the Manchester City and Chelsea players that featured in the Champions League final, not being involved at all in England's two warm-up matches.

Thursday's news that Harry Maguire has resumed training knocked his price down from 6/1 to 4/1 but, surely, after several weeks out and with such a delicate injury as ankle ligaments, it would be a massive risk - to player and team - to throw him in.

Of the other options, Tyrone Mings might have played himself out of a berth during the pre-tournament friendlies - he was lucky not to give away a penalty against Austria that VAR would have flagged and also looked nervy against Romania.

Ben White looked far more assured and, as Joe Rindl points out, has come in to 5/4 from a huge 50/1 a fortnight ago, but is a tournament opener against the World Cup finalists really the time to hand a centre-half only a second international start?

The bookies believe the battle is between those two - either Mings or White appear in the 13 most likely starting XIs according to the odds, with Wolves' Conor Coady only to be found further down the list.

For all of the talk of Jack Grealish, Raheem Sterling or Marcus Rashford further forward, this defensive decision could be the manager's biggest call against a Croatia side who, while ageing, still pose an attacking threat.

While the absence of Manchester City's Champions League finalists from the beginning of England's training camp does not seem to have hurt the starting chances of Stones and Walker, the opposite could be true for Chelsea left-back Ben Chilwell.

Having forced his way back into contention with a fantastic second half of the season under Thomas Tuchel, Chilwell has been uninvolved in the two warm-up games, while Shaw impressed with an all-action display in the win over Romania.

The former Leicester man did start two of England's World Cup qualifiers in March, though, with Shaw starting the other - and with both having the attacking instincts to play as a wing-back should Southgate opt for that system, this is more of a toss-up than the 1/3 on Shaw and 6/4 on Chilwell suggests.

We just hope a few of you got on the 7/1 we flagged up on Shaw to make the squad only seven months ago.

Just as intriguing is the battle for the right-back berth - if Southgate goes four at the back, Walker is considered a banker at 1/20 - but if the City man moves inside as part of a back three, the market opens up.

Trent Alexander Arnold's withdrawal through injury means Reece James and Kieran Trippier would be battling for a right-wing-back berth in that instance - the scrap amusingly reduced to two from the four Southgate initially, and controversially, picked.

Trippier's versatility and experience - including tournament experience in Russia 2018, remember - could well earn him the nod but, like the left-back spot, it's tough to call and, like the centre-half conundrum, depends hugely on the formation England play.

Jack Grealish is becoming this generation's Glenn Hoddle or Matt Le Tissier, such is the growing clamour for the Aston Villa playmaker's inclusion in this England side.

At 10/11 though, the bookmakers are still unsure as to whether he will make the starting XI, though Southgate's non-committal interview about Grealish's chances after he impressed in the friendlies against Austria and Romania throws doubt over his place against Croatia.

He has admittedly come in from 3/1 so his chances are greater than a fortnight ago but with Declan Rice, Mason Mount and Phil Foden all heavily odds-on, the numbers are slightly against the Villa man.

While we have documented just how important Grealish is to his club (and could be to his country), Rice, Mount and Foden have all enjoyed equally influential seasons at domestic and/or European level.

And while Foden, Grealish and Mount could conceivably all play in the same side, behind Harry Kane, it seems unlikely that Southgate would leave out both Sterling and Rashford to accommodate that trio.

Rice, meanwhile, back fit from a knee injury that had raised concerns about his Euro 2020 status, is a guaranteed holding midfield starter after a fantastic campaign.

Kalvin Phillips played alongside Rice in recent World Cup qualifiers, and the Leeds man is 4/5 to start against Croatia should Southgate opt for that double pivot midfield, with Liverpool captain Jordan Henderson, only just back from injury, 5/2.

Jude Bellingham is now a shorter price than Henderson to start the first game at Wembley.

Harry Kane joins Stones, Pickford, Rice and Mount as absolute certainties to line up against the Croats and, barring any (please, no) training-ground injury, the 2018 World Cup Golden Boot winner should surely be 1/500 never mind 1/50.

England's chief attacking quandary is over who plays behind or around him. It would be a surprise if neither Sterling nor Rashford, so long Kane's main support acts at international level, were included but both have had hit-and-miss seasons.

Each has drifted out in the betting in recent weeks - Sterling to 5/6, Rashford to evens, despite the latter captaining the side and scoring the winner against Romania.

Neither Sterling or Rashford have ever let Southgate down, with the drift likely due to the shortening of Grealish and Foden, as one of those two could occupy a forward role in a 4-3-3 or 3-4-3.

Jadon Sancho is knocking on the door too in that position, but his price has drifted to 15/8 to start the opener and he's only started one of the last seven. Dominic Calvert-Lewin (14/1) would need a Kane injury to get the nod from the start.