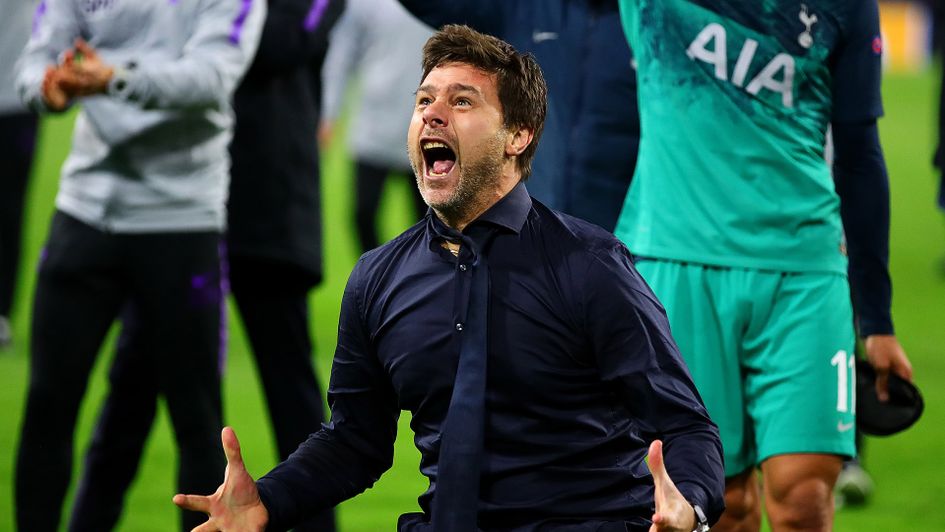 Mauricio Pochettino sacked: A look at the manager's highs and lows at Tottenham

Mauricio Pochettino has left Tottenham after five and a half years at the club.

It has been an eventful and swashbuckling ride during his time in north London full of ups and downs. Here, the PA news agency charts the highs and the lows during that time...

At half-time of Champions League semi-final second leg against Ajax, Tottenham were dead and buried. They trailed 2-0 on the night and 3-0 on aggregate and Ajax supporters were booking flights to Madrid during the half-time interval. Spurs needed a hero if they had any chance of continuing what had already been an amazing journey. Step forward Lucas Moura. The Brazilian's lightning pace and footwork saw him quickly bag two at the start of the second half, but it looked like the comeback would fall just short - until the final few seconds of injury time. Moura latched on to Dele Alli's pass to fire into the bottom corner, completing his hat-trick, sparking scenes of wild celebration and sealing one of the most famous nights in the club's history.

THAT reaction on THAT night at Ajax.

Mauricio Pochettino had some great times at Tottenham. #THFCpic.twitter.com/7Fw1PDvta7

Playing at Wembley was not an altogether enjoyable experience for Spurs, but there were some memorable nights there, notably the slaying of the European champions. They put Real Madrid, still with peak Cristiano Ronaldo in their side, to the sword at the national stadium in a real Red Letter Day. Dele Alli put them ahead in the first half and was rewarded for an outstanding display with a second after the break. Christian Eriksen put them 3-0 up soon after before Ronaldo got one back late in the game. The result and the performance was an announcement that Spurs had arrived on the European stage.

Pochettino will always be able to say that he was the first opposition manager to beat Pep Guardiola in England. The pair, who regularly faced off as Barcelona and Espanyol managers, first came face to face in this country in October 2016 and Spurs handed down a first defeat to Guardiola's Manchester City. An Alli opener and Aleksandr Kolarov's own goal gave the north Londoners an impressive three points. Guardiola dominated the Premier League rivalry after that, but Pochettino got one over his rival in the Champions League last season, masterminding a narrow, but dramatic, away goals win in the quarter-finals.

The 2016-17 season was Tottenham's final year at their famous White Hart Lane stadium before its demolition and Pochettino was determined for them to say goodbye to their home in style. And his side answered his wish as they went the entire campaign unbeaten in front of their home fans, winning 17 of their 19 games. They did it scoring 47 goals and conceding only nine. The final ever game there on a day of celebration and nostalgia was a 2-1 win over Manchester United.

It must have felt like Tottenham were never going to win at Stamford Bridge again as their hoodoo at the home of their London rivals had gone on 28 years. In 2017-18 the majority of their players had not even been born when Gary Lineker scored the goal that gave them their last victory there, but they finally stopped the rot with three points which were vital to their Champions League qualification. They fell behind to Alvaro Morata's header, but Eriksen levelled up before the break with a fine strike from distance before Alli continued his penchant of scoring big-game goals with a second-half double.

Having embarked on an epic and memorable journey to the Champions League final, sealed by that wild night in Amsterdam, Spurs fell flat in the showpiece in Madrid, losing 2-0 to Liverpool. That defeat hurt Pochettino more than any other as a manager. He revealed that he spent 10 days grieving the loss at his home in Spain, barely leaving his room, and said that the feeling was as bad as that he felt as a player following Argentina's omission from the 2002 World Cup.

Spurs went into the record books for all the wrong reasons after the 7-2 Champions League hammering at the hands of Bayern Munich. The performance might not have been quite as bad as the scoreline suggests but it was Pochettino's heaviest defeat as a manager. It was also the first time Spurs had conceded seven at home in a major competition in their 137-year history and the first time any English club had let in that many in a European competition. It was an early black mark at their new stadium and an embarrassing night for the club.

After a thrilling title race with Leicester had seen Spurs fall short at the death, they downed tools on the final day of the season and were hammered, allowing Arsenal to steal second place. They capitulated to a 5-1 defeat against Rafael Benitez's already-relegated Newcastle, who had 10 men, and Pochettino was apoplectic. He revealed in his book that he wanted to "kill" his players afterwards given their poor attitude.

Spurs had lost in the FA Cup semi-final 12 months earlier so when they got back there in April 2018 there was a sense that this was their time. That was only heightened as playing against Manchester United at Wembley, their home ground for the season, an electric start was rewarded with an early goal from Alli. But they failed to take further early chances as Alexis Sanchez levelled and then Ander Herrera sent Jose Mourinho's men to the final. It did nothing to shake off the 'Spursy' tag - perennial nearly men.

Having delivered Tottenham towards the top of English football, Pochettino's ability to take them to the next level was seemingly hampered by a self-imposed transfer ban which saw them go 18 months and through two transfer windows without bringing any new players into the club. It meant the Argentinian was not able to add any depth to his squad, which was shattered from their World Cup exertions, nor could he freshen it up following four years of the same players hearing largely the same message.