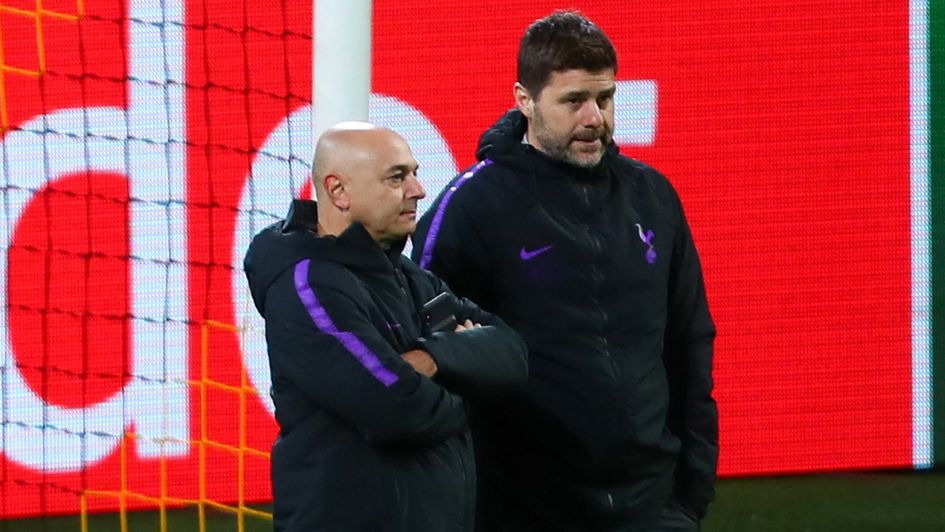 After Mauricio Pochettino's exit from Spurs, we look at the reaction from the world of football...

The Argentinian has been relieved of his duties after five-and-a-half years in charge.

Spurs, who were in the Champions League final only six months ago, have endured a tough start to the season and are currently 14th in the Premier League table.

Chairman Daniel Levy, who appointed Pochettino in June 2014, said: "We were extremely reluctant to make this change and it is not a decision the board have taken lightly, nor in haste.

"Regrettably domestic results at the end of last season and the beginning of this season have been extremely disappointing.

"It falls on the board to make the difficult decisions - this one made more so given the many memorable moments we have had with Mauricio and his coaching staff - but we do so in the club's best interests."

Tottenham will struggle to find a better manager than Mauricio Pochettino after opting to sack the Argentinian, according Gary Lineker.

Mauricio Pochettino has been sacked by @SpursOfficial. He helped the club to punch massively above their weight for years. Good luck with finding a better replacement....ain’t gonna happen.

"When people talk about the players all loving him, if they love him that much, maybe they should have all started playing a bit better," Redknapp said.

"They've got him the sack, at the end of the day. They haven't performed well enough, that's why he's lost his job. If they all loved him so much, perhaps they should have done a bit better for him.

"That's why you get the sack. They've had one Champions League final; if you look back at the run, everything went their way a little bit. They've not won a trophy in five or six years with an incredible set of players.

"People say they need a better squad; have a look at them, they have four international full-backs, internationals all over the place, England internationals, all kinds. And up front they're not short either. They're massively underachieving at the moment."

'They tried to get Ancelotti when they sacked me. They spoke to him when I was still at the club. They spoke to Brendan Rodgers as well' - more from Harry Redknapp.

Who do you want, Spurs fans? #THFC pic.twitter.com/n5Jyo47WdS

Redknapp was on Sky Sports News a short while ago and was asked if he fancied the Spurs job.

“Of course I would! But I’m a realist, I don’t live in cuckoo land, the chances are very slim," he said.

"If Daniel rang me tomorrow I’d walk there, of course I would, but it’s not going to happen.”

Former Liverpool defender Jamie Carragher backed Pochettino to be back managing in the Premier League soon.

I said a few weeks ago I felt this project had ran its course, I thought there would be a change at the end of the season with either the manager or players changing. Pochettino has been a brilliant manager for Spurs & will be back in the PL sooner rather than later! #pochettino https://t.co/afKvgpIUmK

More Jamie Carragher who suspects Mauricio Pochettino may feel a little let down by the decision to let him go.

He said on Sky Sports News: “Massive shock - There’s no doubt Spurs have made a poor start to the season and had a poor 2019 domestically.

"I think the job Mauricio Pochettino has done is miraculous the four or five years he’s been there. Certainly he deserved to see out the season and get as close as possible to the Champions League where they’ve been so often so a massive shock."

”Spurs are struggling in the league this term and currently sit 14th but Jamie Carragher - who has just done a phone interview with Sky Sports News - is still stunned by Pochettino's departure. “

"I always think it’s a tough time for a manager if they’re not doing well before an international break, it gives the club time to make a decision, a week or so to settle everything down and bring someone in.

"But to make it late shows that there’s probably been a lot of discussions going on in the 10 days since the Sheffield United game. I’m shocked that it’s a sacking and I thought it may have been when I first heard the news a mutual agreement.

"The fact he’s been sacked I find that really, really strange and also I think it’s a bit out of order really considering the job he’s done."

I can’t thank this man enough. He’s taught me so much and I’m so grateful for everything he’s done for me. Good luck and hope to see you again my friend. pic.twitter.com/dUO6AJlMxR

"It's a surprise for me as well," he told Sky Sports after Belgium's Euro 2020 qualifying win over Cyprus.

"I think the club made a decision and we have to accept this. I think we have to be very thankful to him, for what he achieved, he brought this club to the next level."

The centre-back said he expected Spurs to bring in a "big manager" to replace Pochettino.

#COYS. Thank you from our heart to our players , staff, and special thanks to you all , lovely Spurs Fans . 💙💙💙💙💙💔 pic.twitter.com/qfZjyUaWGu

Tottenham defender Ben Davies paid tribute to Pochettino and predicted the Argentinian would "go onto bigger and better things" after leaving Spurs.

"I didn't know until after the game," Davies said following Wales' 2-0 win over Hungary which clinched their qualification for Euro 2020.

"I was very shocked. But I'd like to put on record, it's been amazing to work with him for the last five years and I'm sure he will go onto bigger and better things."

"We're shocked and saddened to hear our club has sacked Mauricio Pochettino and his coaching staff," their statement read.

"During his time at Spurs, Poch gave us many of our best moments as supporters, made Tottenham Hotspur a force to be reckoned with again, and forged a strong link with the fans. We will never forget the joy he brought us.

"Of course, results in the league have been disappointing for some time. But many fans thought Poch had earned the right to turn it around in the first sustained period of poor form we've had during his time at the club. We now have to look forward and take stock. But there are questions that must be asked of the board of THFC."

Shoulda backed him not sacked him! Gutted for Mauricio.

As any manager will tell you the game is all about results & when they don’t go in your favour you have to expect the inevitable. Pochettino did an awesome job last season but it didn’t work out this season & he will be honest enough to say that, that’s football 🤷🏽‍♂️

Arsenal fans unhappy with their manager. Now there is a top top boss available in Poch. Surely he couldn’t ! Could he ? #topgunner?

Hearing Mourinho for Spurs, surely not????