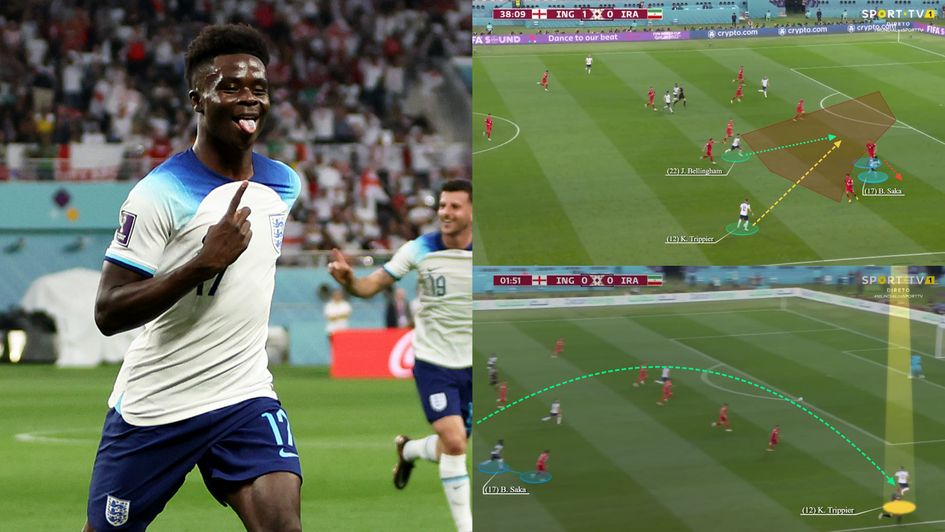 How Bukayo Saka justified Gareth Southgate's trust in him

Handed a coveted start by Gareth Southgate for England's World Cup opener against Iran, Bukayo Saka emphatically vindicated his manager's decision by putting in sparkling a man of the match performance.

Carrying over his exceptional form at club level for Arsenal, Saka was a constant thorn in Iran's side on his way to bagging a glorious brace during England's crushing 6-2 victory.

Handling the occasion of his World Cup debut remarkably well, especially considering the last time he played in a major tournament he missed a penalty in the Euro 2020 final vs. Italy then suffered horrific racial abuse in the aftermath, Saka cut a confident, composed figure on the grand stage.

Deployed out on the right wing within Southgate's base 4-3-3, the 21-year-old again played with a maturity and quality that belies his tender years and experience.

Causing persistent problems for the Iranian rearguard with his multifaceted movement, this aspect of his game was an integral component towards his success.

To start with, how he'd frequently drop deep and infield between the lines enabled him to not only connect play, but it also generated room for Kieran Trippier out wide to overlap and made gaps for Jude Bellingham to run into due to Saka's tracker, Milad Mohammadi, typically following him deep. 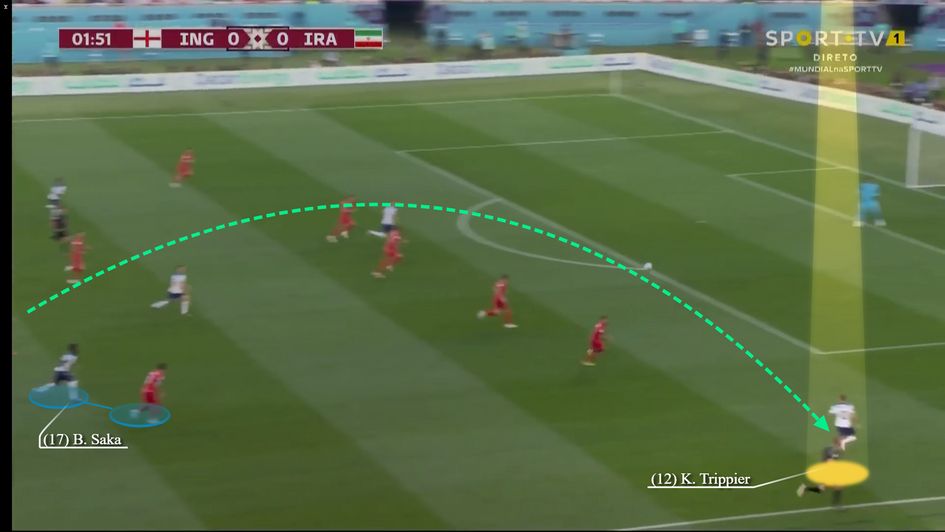 Saka venturing deep and inside to free up Trippier to overlap

On other occasions, his marker would be unsure whether to follow him, wary to leave holes in the Iranian backline, which afforded him extra time to execute his actions in dangerous central areas. 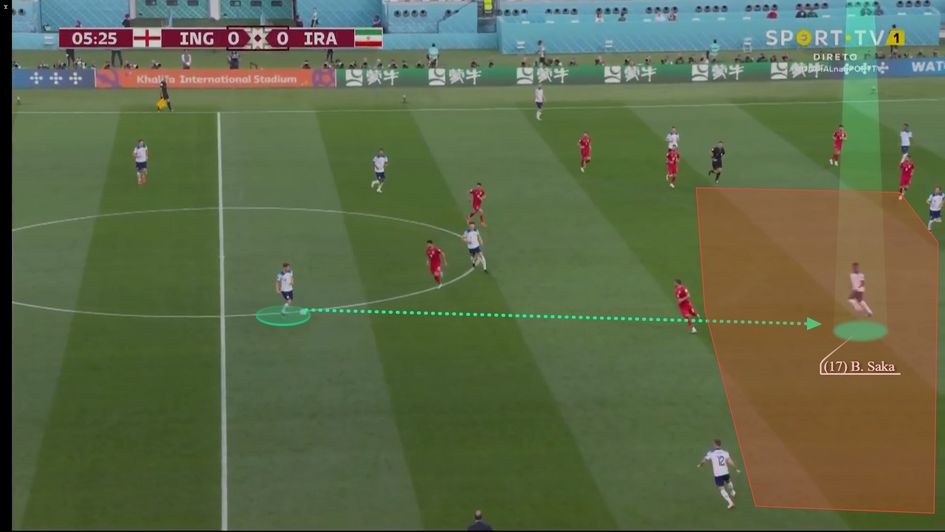 Intelligently dropping deep between the lines 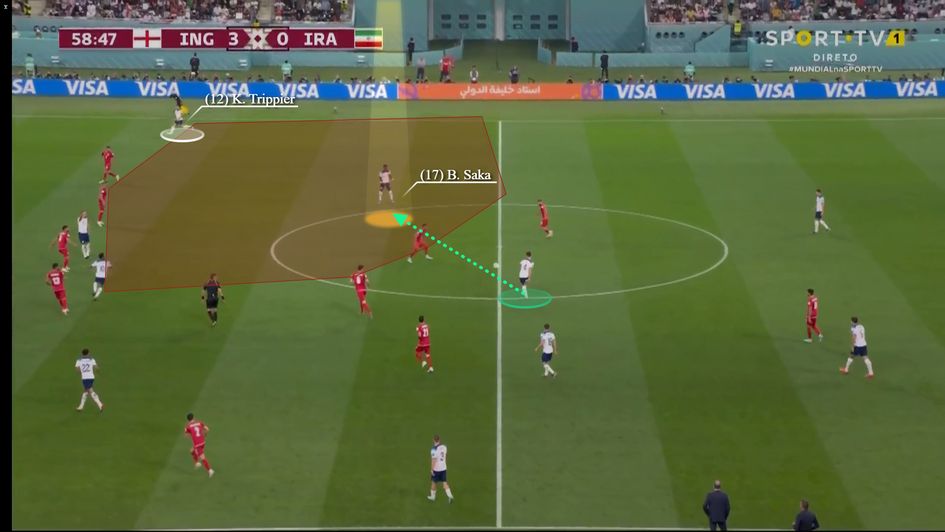 Nicely dropping deep between the lines. Also note how Trippier marauds ahead when he sees him drop deep

Saka's runs down the channels and into the box proved another lethal outlet for him and his team, for he'd shrewdly target and direct his surges open noticing when an opponent stepped out to press Trippier and if his man was ball watching or preoccupied. 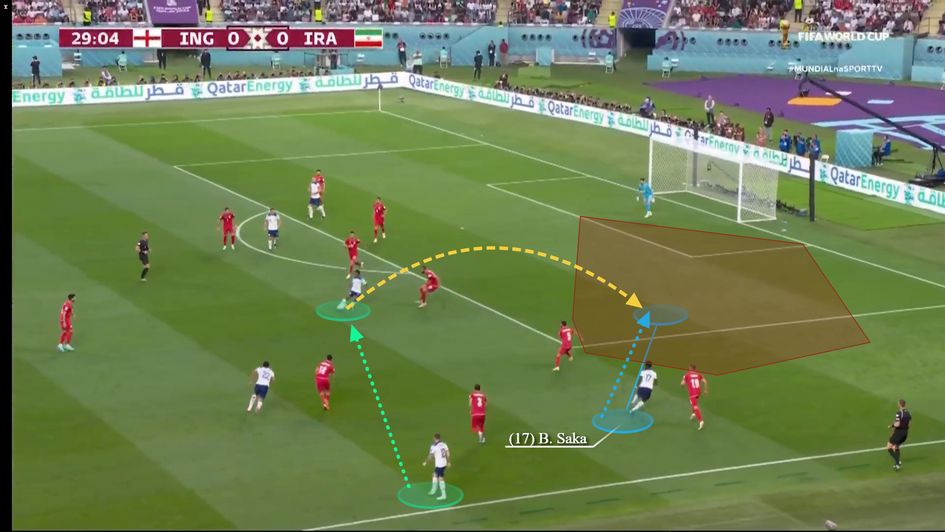 Wonderfully timed run in behind 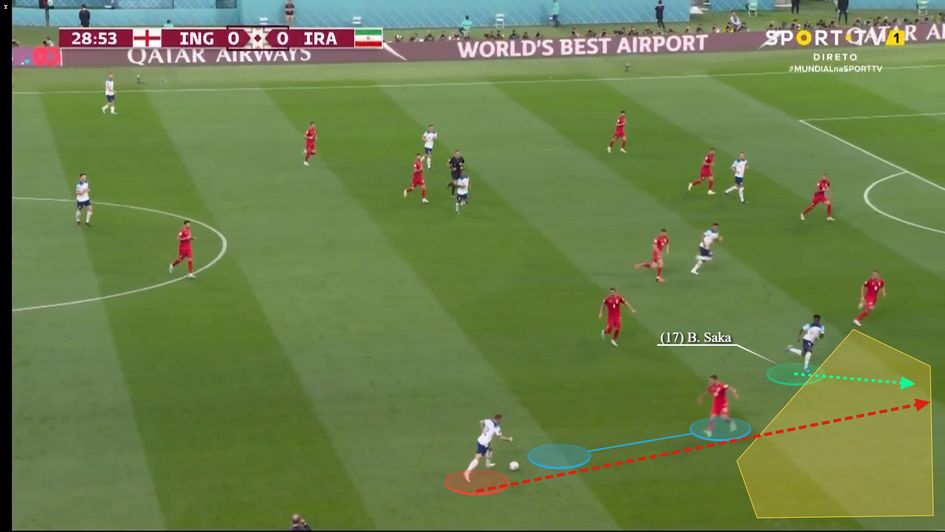 Quality run down the channel as the defender steps out

A fine reader of the game with great awareness, both of his goals owed much to his aptitude here. For his first, the way he dropped back as the defence collapsed deeper to be ideally situated for Harry Maguire's nod down before rifling home his sensational volley was vital. 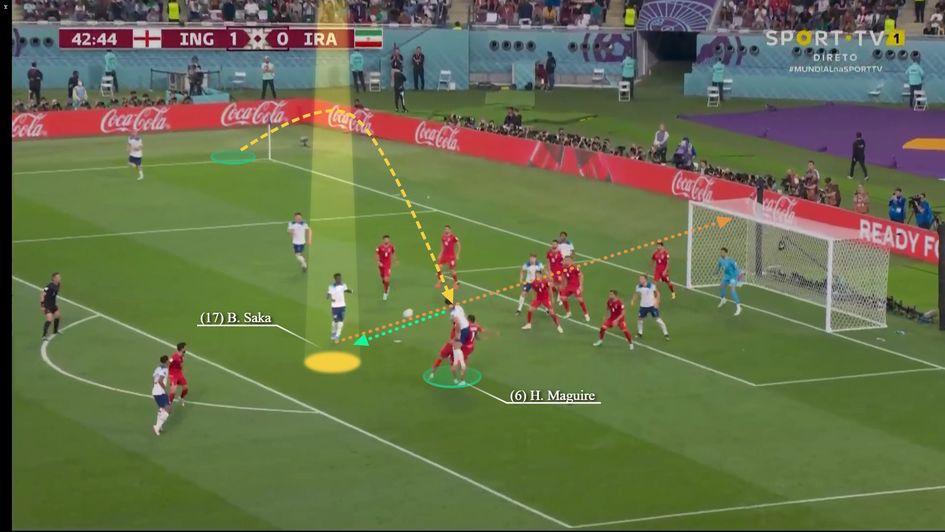 Smartly getting free prior to his sensational first goal

Then, for his second, his nifty run, that saw him peel off his adversary slightly, gave him the initial room he needed to receive to then use his dribbling wizardry to gain the separation he craved, as he subsequently proceeded to expertly place his finish into the back of the net. 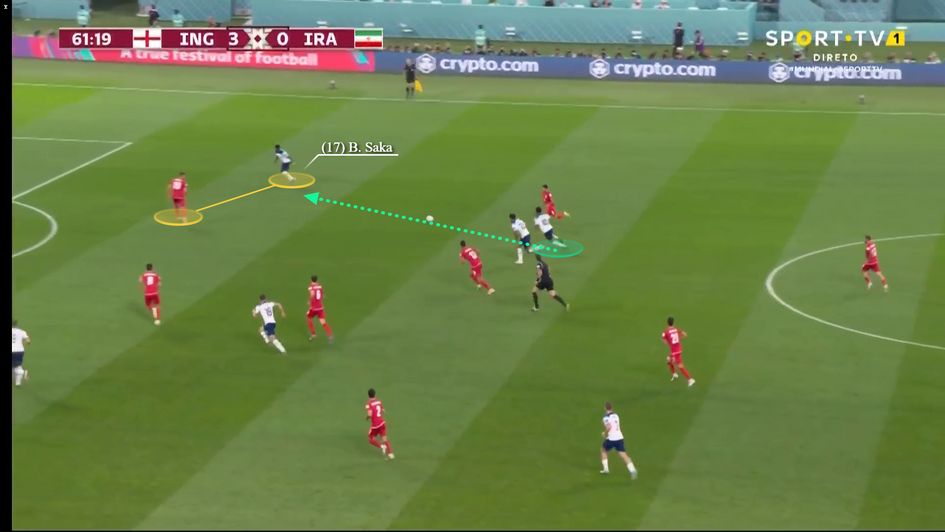 Peeling off to receive prior to his second goal 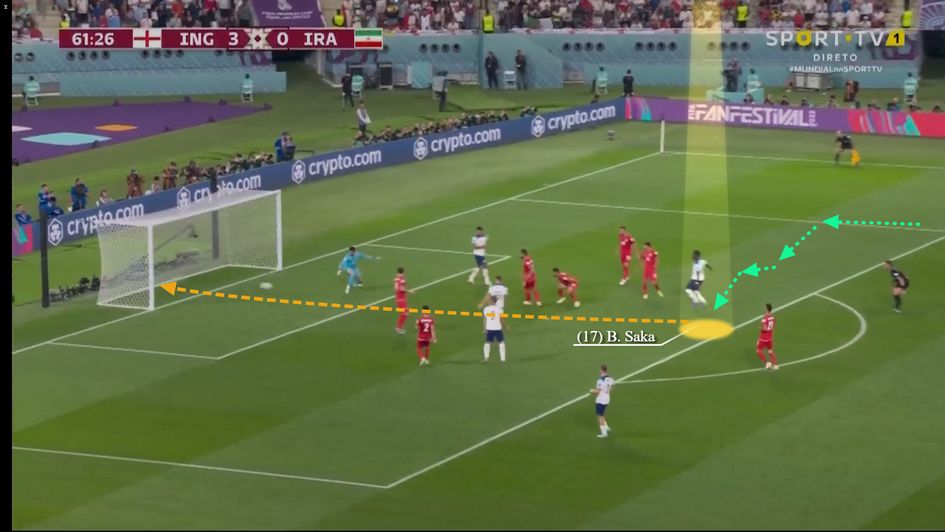 Wicked dribble before expertly placing his finish for his second goal

Mixing things up shrewdly to keep his markers guessing and in two minds, the way he'd hug the touchline so he could be isolated vs. his direct opponent was another fruitful avenue for him. Using his qualitative advantage and technical and athletic attributes, this gave him the platform to torment the likes of Mohammadi and Majid Hosseini.

In addition, his occupation of at least one and sometimes two markers notably manufactured room for Trippier to underlap or Bellingham to maraud forward with his trademark penetrative bursts into the box. 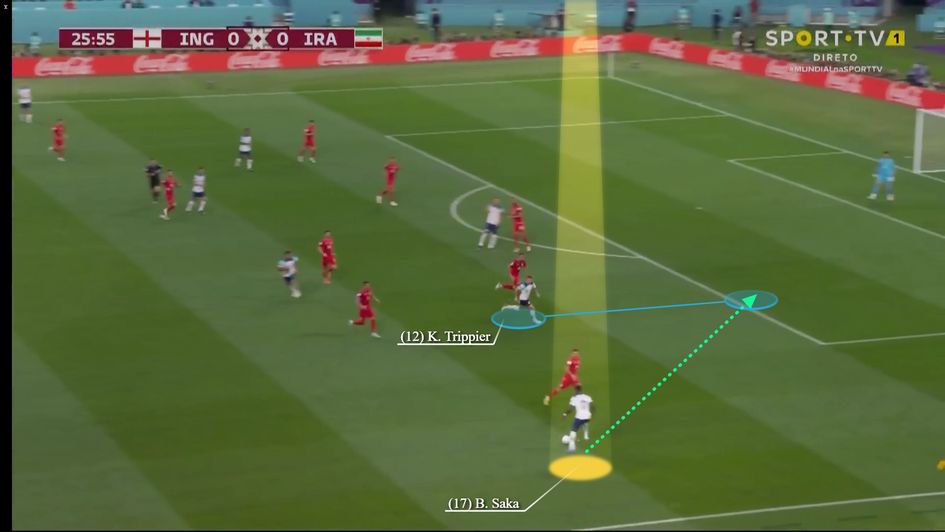 Trippier underlapping as Saka holds the width to go 1v1 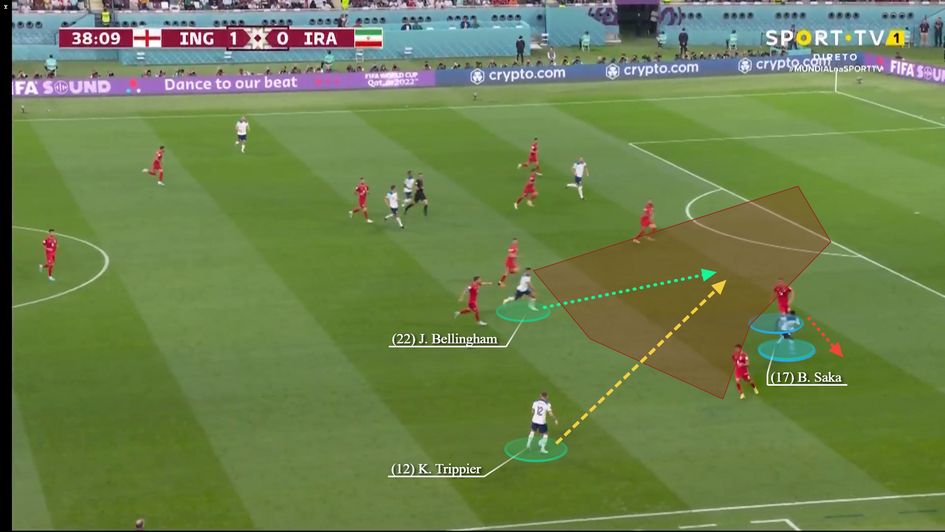 Crucial in terms of manipulating the Iranian defensive unit with his aptitude in this regard and his complementary relationships with Bellingham and Trippier especially, there was no doubting what an asset his movement and positioning was for the Three Lions offensively.

Meanwhile, when it came to his work in possession, Saka shone here as well, with his distribution and particularly his dribbling elevating his threat massively.

Blessed with a crisp first touch and razor sharp ball control, this, in combination with how he adapted his receiving posture to shield the ball or let it roll across his body to outfox foes, compounded issues for Carlos Queiroz's men.

Such a nightmare to keep tabs on due to his ability to hold the ball up, resist pressure with slick twists and turns and outfox opponents with whirring feints, shimmies and changes of pace and direction, Saka was a real nuisance for Iran.

His aforementioned second goal served as a testament to his class here, where the silky skilled speedster's series of ingenuitive manoeuvres bought him the time and space he needed to apply his clinical finish.

Switching the focus to his passing, and although he wasn't as influential in this compartment, he still struck some measured through balls to oblige runners, engaged in some crafty interplay in close quarters and effectively got the ball into the feet of his fellow midfielders and attackers. 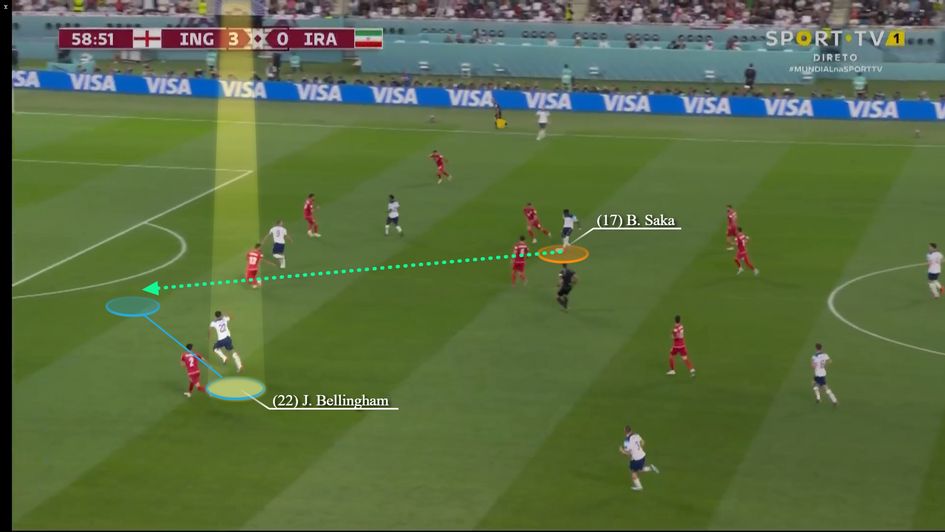 Measured through ball in behind

By the numbers, his 24 passes completed at 86%, four dribbles, four touches inside the box, three shots, two progressive runs, two shot assists and two goals, which takes his scoring contribution for the season to 13 in all competitions (7 goals, 6 assists), accentuated his brilliant body of work. 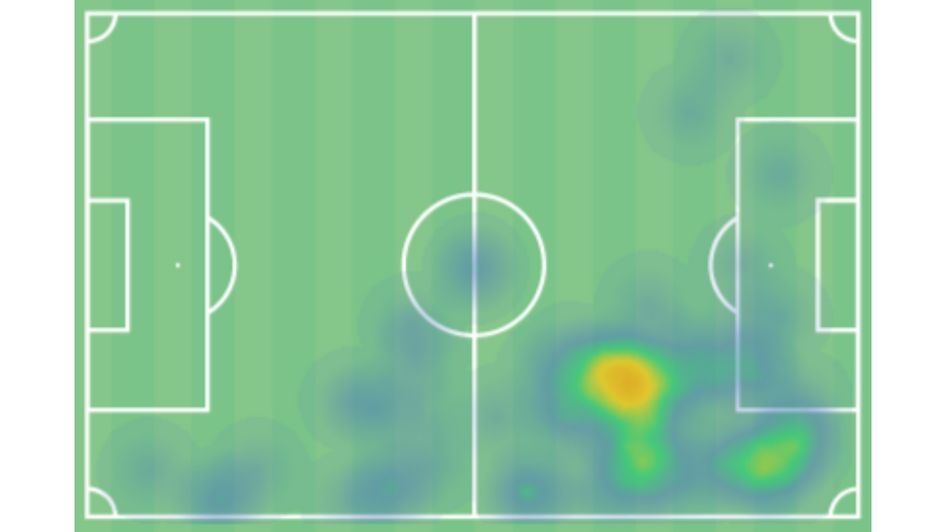 By the numbers, his 23 passes completed at 82%, three shots, one key pass and two goals, which takes his scoring contribution for the season to 13 in all competitions (7 goals, 6 assists), accentuated his brilliant body of work.

Enjoying an absolutely scintillating World Cup debut, which incredibly saw him become the youngster player to score a double in their first World Cup match since Franz Beckenbauer in 1966 (as per Opta), this was certainly a day to remember for the immensely gifted Gunner.

"I wonder if the England fans realise what a truly great player we have in Bukayo Saka. Yes, I know I'll be accused of bias because Bukayo plays for Arsenal but, honestly, he has special gifts," explained former Arsenal midfielder Jack Wilshere.

"What amazes me about him is he always makes the right decision, it's incredible. It is so rare for a young player – he's only just turned 21 – to instinctively know what is right in any given situation."

Yet again underlining what a tremendous talent he is, Saka continues to go from strength to strength, as his latest game changing masterclass aptly demonstrated his quality.

Primed to take the tournament by storm, grasping his opportunity with both hands and leading the race for the Golden Boot, watching how he backs up this display will be intriguing against the USA come Friday.

But for now, after all he's been through, he deserves a moment to soak it all in and bask in the glory of his magnificent display on the biggest stage football has to offer.