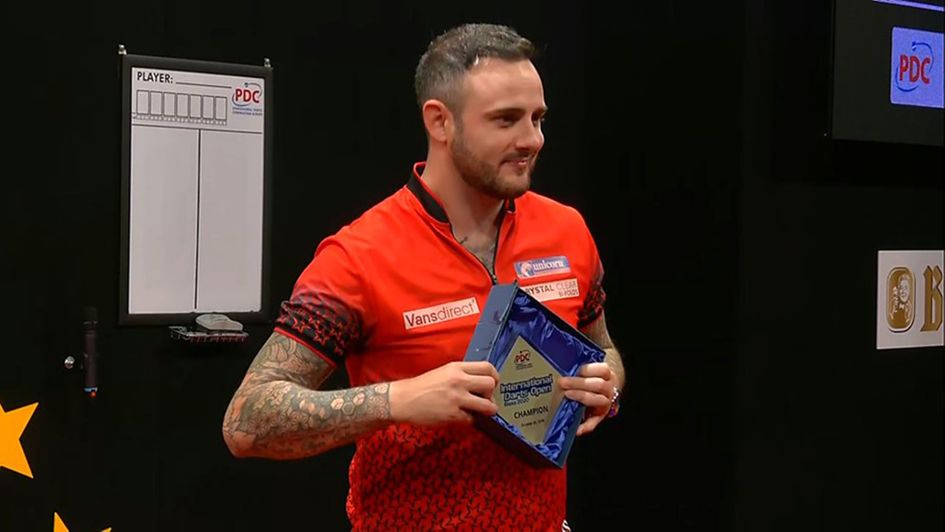 Just over a year after overcoming MVG 8-5 to claim his maiden title in front of a crowd at the European Darts Championship, the Bradford thrower repeated the same impressive feat by the same scoreline to maintain his 100% record against the world number one in finals, even if it is 'only' two out of two.

Cullen's fourth ranking title overall - and first of the season - seals his spot at the Grand Slam of Darts, while the £25,000 first prize lifts him back into the world's top 16 and also secures him top seeding for next weekend's televised European Championship in Germany.

CULLEN IS THE CHAMPION 🏆

He will be the number one seed at the European Championships too! pic.twitter.com/gqpCVsJMa3

The Rockstar played superbly in all departments against van Gerwen and despite losing the opening leg to a 116 checkout, he rattled in a couple of 13-darters and another two in 14 to open up a 5-3 lead.

MVG wouldn't lie down and stayed in touch at 5-4 and 6-5 down but he was unable to earn a dart at a double in the next two legs as Cullen held his nerve to claim the title.

Joe Cullen's record against MVG in finals is now played two won two - with both being in European Tour events with crowds. Although obviously not like this one...pic.twitter.com/mVyDNYS9XK

Cullen said: "Michael just didn't get going, luckily for me. I didn't think I was too great either but I won and surely I must be in the Grand Slam now?! I don't think I've come close to losing [this weekend] but I've done enough in every game and I've won the title."

A second European Tour title for Cullen, and a second final victory over Michael van Gerwen.

He is the 2020 International Darts Open Champion 🏆 pic.twitter.com/wAAoT0uOGp

MVG has now failed to win a European Tour event in a season for the first time since 2012 but considering there's only been four of them this year, it's hardly reason to add more fuel to the 'crisis' talk, especially considering he also reached last weekend's final against Jose De Sousa.

Cullen began his campaign by defeating Robert Marijanovic 6-1 with a 101.27 on Saturday while he only needed to post a mark of 89.24 to see off Dave Chisnall by the same scoreline during Sunday's afternoon session.

He defied Ross Smith's 100 average - albeit with a 99 of his own - during the quarter-finals as he overcame Gerwyn Price's conqueror 6-4 before easing past Michael Smith 7-3 to reach his second ranking final since the sport resumed back in July.

Cullen's ruthlessness on the outer ring was crucial in his victory over Bully Boy, who had only dropped four legs in his previous four matches, as he pinned seven of his nine doubles.

Van Gerwen averaged under 90 in both of his first two victories this weekend against Madars Razma (6-4) and Andy Hamilton (6-5), who missed a match dart at bullseye, but he upped his game dramatically to see off James Wade 6-3 with a mark of 102.

His averaged dropped to below 90 once again during an arduous battle with Mensur Suljovic - but an otherwise arduous semi-final did reach a thrilling climax as the Austrian missed match darts in the penultimate leg before MVG punished him with a match-winning 140 checkout in the decider.

A stunning 140 checkout from the world number one as he books his place in the final, beating Mensur Suljovic 7-6.

He's never won this title before... will it be Euro Tour number 33 for MvG? pic.twitter.com/T2sbez4KkM

Missed darts from Mensur Suljovic and Michael van Gerwen gobbles up the opportunity to level.

He is now throwing for a spot in the final! pic.twitter.com/c0BPKC9ock