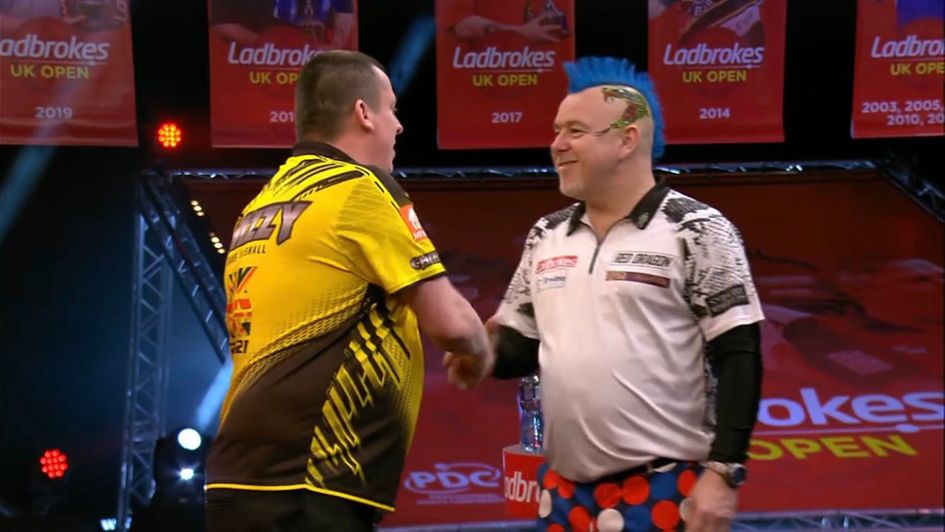 Darts results: Gary Anderson and Peter Wright crash out of UK Open but Michael van Gerwen and Gerwyn Price battle into round two

Peter Wright, Gary Anderson and Nathan Aspinall were the biggest stars to fall on the opening night of the UK Open after receiving no luck in the 'FA Cup of Darts' draw.

All three players have won this major in the last four years but on this occasion the random draw format saw them pitted against Dave Chisnall, Dirk van Duijvenbode and Krzysztof Ratajski in tough opening assignments and none of them prevailed.

Anderson, who triumphed in 2018 when the event was last staged behind closed doors due to a freak storm rather than the lingering impact of a freak global pandemic, went right to the wire with van Duijvenbode in a match of twists and turns but last year's World Grand Prix runner-up pinched it with a 14-darter when his opponent agonisingly waited on 41.

The popular Aubergine farmer, who was one of our pre-tournament tips at 33/1 following an impressive Super Series last week, boasted a superior average of 101 compared to Anderson's 94 and hit three more 180s with six although the Flying Scotsman did manage two 100+ checkouts.

Wright, who beat Gerwyn Price in the 2017 edition to win his maiden major title, was well below his best as Dave Chisnall cruised to a 10-5 victory in the final match of the night with an impressive 100 average that was rarely put under pressure.

Snakebite posted a mark of 94.25, hit just two maximums and missed 12 of his 17 darts at doubles in a below-par display while Chizzy will take plenty of confidence into the weekend as he chases his maiden TV major.

😲 Peter Wright has crashed out of the UK Open at his very first hurdle...

...but he couldn't have been given a much tougher drawpic.twitter.com/oDuM90kjqQ

The scoreline was a tad harsh on the Stockport man who averaged 101.66 compared to the Polish Eagle's 102.57 but ultimately the difference was the finishing as he spurned 12 of his 17 attempts as Ratajski clinically pinned 10 of his 15.

Joe Cullen was highly-fancied to go far this weekend having performed so well at last week's Super Series, where he won the opening event before losing to Raymond van Barneveld in another final, but he too got thrown in at the deep end against world number eight Michael Smith.

The Rockstar was a very marginal favourite based on recent form and surged into an early 3-0 lead but Bully Boy roared back in a thrilling tie featuring six 180s apiece and five 100+ checkouts to remind fans just what he's capable of following a hugely disappointing World Championship and season-opening Masters.

Smith averaged 101.57 compared to Cullen's 99.19 and also hit the Big Fish finish of 170 among his three ton+ outs, but he had to survive a match dart in the deciding leg before pinning double tops for an 11-darter.

It won't get any easier for the St Helens thrower, however, after being handed a fifth-round draw with Grand Slam of Darts champion Jose De Sousa, who defied Mervyn King's 102 average to edge a pulsating clash of his own 10-9 with a 103 checkout.

What an incredible game to end the action on Stage Two as Michael Smith sneaks into the Fifth Round at the expense of Joe Cullen.

Look what it means to him! pic.twitter.com/0EMsbUXzJh

Jose De Sousa takes out a clutch 103 finish to beat Mervyn King in a last-leg decider!

What a game to kick off the evening pic.twitter.com/WnL8vmLrW7

Defending champion and tournament favourite Michael van Gerwen received an 'easier' draws on paper but ended up in a real battle with former Lakeside champion Scott Mitchell before running out a 10-8 winner with a 99 average.

Mitchell did move into an 8-7 lead with his third 100+ checkout but was unable to get sight of another attempt at a double as MVG survived a real scare and will next play Mensur Suljovic.

World champion Gerwyn Price, who finished runner-up to MVG in an epic final 12 months ago, averaged 94.35 in a fairly comfortable win over Peter Hudson although he's still recovering from an ear infection which forced him to pull out of the last two Super Series events last week.

John Brown is the sole surviving player from the very first round as the 22-year-old takes his dream UK Open debut into the weekend.

Having won his Tour Card at Qualifying School, his ranking of 101 meant he started early doors on Friday, but having knocked out Gavin Carlin, Nathan Rafferty and Chas Barstow, he returned to the oche with enough mental stamina in the tank to see off former Lakeside runner-up Mark McGeeney 10-6.

His day was in stark contrast to his father Steve, who failed to turn up to the oche in time for his opening clash with Scott Waites and was subsequently timed out. He later explained on social media that it was because he was distracted by watching his son play.

Alan Souter, who was tipped up on these pages at 200/1, also produced an eye-catching day by knocking out two-time champion Raymond van Barneveld in his return to the TV stage as well as Mickey Mansell in the afternoon before an impressive 10-5 triumph over World Championship semi-finalist Stephen Bunting.

Lisa Ashton didn't make it to the evening session after a 6-2 defeat to Darius Labanauskas but earlier in the day she became the first woman to post a 100+ average on TV during her victory over Aaron Beeney.

Lisa Ashton sets a 100.3 average in her victory over Aaron Beeney, setting a new World Record for the highest average on TV for a female player!

The standards go up and up ⬆️ pic.twitter.com/APyUHDFZzF

There were two nine-darters earlier in the day during matches involving Sebastian Bialecki. He hit one himself in the third leg of his first round win over Jim McEwan before being on the receiving end of one against Jitse van der Wal before winning the game. He'd end up getting knocked out by Mensur Suljovic, however.

Players ranked in the world's top 32 join the competition at this point, along with the 32 who have come through the previous three rounds.