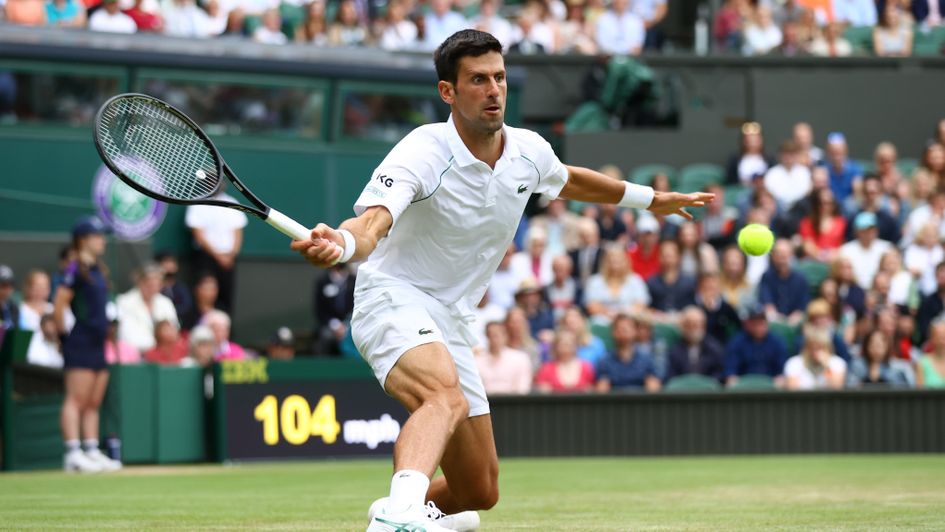 Novak Djokovic is one win from a record-equalling 20th grand slam title after beating Denis Shapovalov in straight sets to reach the Wimbledon final.

The world number one, looking for a sixth All England Club triumph, beat Canadian 10th seed Shapovalov 7-6 (3) 7-5 7-5 and will face Matteo Berrettini in the Centre Court showpiece on Sunday.

Shapovalov, 22, playing in his first grand slam semi-final, was the better player for most of the first two sets but could not convert his chances and fell to a 7-6 (3) 7-5 7-5 defeat.

Djokovic has yet to hit top gear this fortnight but he has only dropped one set – his first match of the tournament against British teenager Jack Draper – and is now one win away from equalling Roger Federer and Rafael Nadal’s record of 20 slam titles and completing three quarters of a calendar Grand Slam.

#Wimbledon title No.6 is in reach.

Defending champion @DjokerNole is into his seventh final at The Championships with a straight sets victory over Denis Shapovalov pic.twitter.com/QpyX7Ho0eZ

Djokovic said: “I don’t think the scoreline says enough about the performance or the match. He was serving for the first set and was probably the better player, had many chances.

“I would like to give him a big round of applause for everything he has done today and also this two weeks. We are going to see a lot of him in the future, he is a great player.”

Berrettini serves up some Italian magic

In the earlier semi-final, Berrettini powered his way past Hubert Hurkacz to set up a spectacular sporting double-header for Italy on Sunday.

Matteo Berrettini turned up with his very best ⭐#Wimbledon pic.twitter.com/eKZAAAlgW3

The main course may be England’s date with Italy in the Euro 2020 final on Sunday evening, but Berrettini will provide a tasty antipasti when he walks out on Centre Court at 2pm.

Hurkacz was the man who broke many a heart at Wimbledon on Wednesday when he knocked out eight-time champion Roger Federer, having previously accounted for second seed Daniil Medvedev.

But the Polish 14th seed was simply blown away by the non-stop barrage that is the Berrettini serve.