Solid performer over the latter half of 2016, and proved himself very effective at this track; C&D winner off this mark in late December. Not looked in the same form on turf after a seven month break and hasn't beaten a single rival in three starts.

Has ability, but his most recent efforts have perhaps implied that he is saving something for himself. Not won since September 2016 (1m4f at Musselburgh), and a falling mark is not enough to make appeal now back on the AW.

Seemingly goes best on turf with some cut (good to soft), so debatable as to whether racing on Tapeta will suit. Not really shown much in a couple of attempts over C&D, and not quite looked good enough at Beverley lately.

Not tasted success for some considerable time (July 2015), but was runner up from a 14lb higher mark over 1m here in March. Hard to enthuse about his recent form, but probably didn't stay 1m4f latest.

Showed nothing in 6f/7f maidens in 2016, but bounced back from a year off to make all and down Oden by 1¾ when upped to 1m2f at Ripon last month. Up 6lb for AW debut, but that form looks solid (second and third subsequent winners).

Lightly raced, and has had just three attempts in handicap company thus far. His first two runs didn't offer much promise, but he was better over this trip at Beverley more recently (third to Bollin Ted) and not dismissed from a similar mark.

Ten race maiden who once raced for David Lanigan, but appears difficult to pinpoint exactly what is his best trip. He's tried 1m4f unsuccessfully most latterly, so is probably worth trying over 1m2f on Tapeta as he falls in the handicap.

Loves this track (1,1,2,2 over C&D) but has climbed the weights. Best to discount her recent run here (too far) and she should have the measure of Lord Kitten on Beverley form from August. Obvious place claims.

Not exactly enjoyed an overly productive 2017, and returns to the Flat for the first time since late June after cutting little ice over hurdles. Likely to be seen to best effect over 1m at Southwell in the months ahead.

Ten race maiden who in truth has shown precious little ability and appears a very risky proposition given his current form. Dropped 10lb since being allocated a handicap mark.

Ten race maiden, but has hit the bar on a couple of occasions, including over 1m4f at Beverley in August when repelled by Sakhalin Star. This drop back in trip could prove beneficial though and he has at least demonstrated that he handles Tapeta.

Bahkit was a revelation back from a break when upped to 1m2f for the first time at Ripon last month. Whilst that form has been franked since, and a 6lb rise seems fair, Joe Doyle might have his work cut out to get on the front end from a wide draw in stall 11. The safest option is to ignore Spirit Of The Vale's latest defeat (too far), and whilst she's higher in the weights now, she commands respect on the basis of her almost exemplary C&D record and looks more than capable of making the frame at least. However, in a race where few can be fancied, a real chance is taken on the seven race maiden SHAKABULA. He isn't fully exposed over longer trips, and with his recent fifth to Vindicator at Thirsk working out well enough, he could capitalise on a reduced plater's mark under the wily former champion Paul Hanagan.

David Ord is hoping it's a case of friends reunited as he heads to Kempton for his best Monday bet. 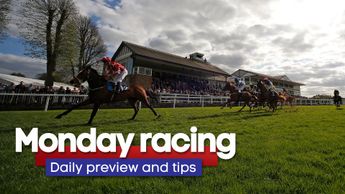 Nick Robson makes Winnetka his best Monday bet and has a tip for every race at all four meetings.

3h
All Racing Tips
Most Followed